Hybrid walk us through the depths of Black Halo, detail their gripes with the industry, and share their positivity from the last year

In the days following the release of their brand new studio album Black Halo, Soundsphere caught up with Charlotte and Mike from Hybrid to hear more about the processes they went through to craft their latest record, the shift in sound throughout their 26-year career, and how they’ve managed to keep themselves and others afloat through the medium of online communities and social media. 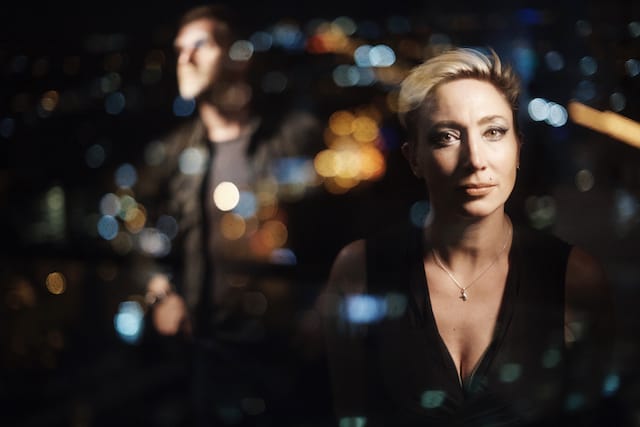 Hybrid have been paving the way for new and exciting electronic music since 1995 and as well as releasing six studio albums, they’ve also soundtracked 26 films, video games, and theatre productions. The exciting new ventures on sixth studio album Black Halo see them throw out a large chunk of the optimism we heard on Light of The Fearless to replace it with something darker and deeper. They’ve had more time to critique their own efforts but with a new, solidified band, they are filled with more confidence than ever, appearing to be incredibly excited about the future of their music and the opportunity to showcase new material live.

“We’re significantly drier than we were 10 minutes ago” they laugh as we’re greeted by possibly two of the loveliest people we’ve ever met. “We’ve got a little mastering record full of 2BQ’s and Compressors and we’re starting to see like a heat shimmer so we thought we’d come somewhere else. This is a welcome break for us to get out,” and where they are in their Worcestershire studio, which they’ve had for the past eight years, looks like a delightful place to be creating music.

It seems they’re glad to be getting out after a long weekend of album release stress too. “The weekend has been pretty hectic with the album coming out,” Charlotte says. “We had a band gathering on Monday and everyone is feeling the repercussions shall we say,” Mike adds, chuckling. Despite the long weekend, they seem very eager to walk us through their new album.

“It’s more subliminally influenced by the time going around you rather than writing directly about those events. Charlotte wanted to write a very personal set of songs and I’m really lucky cos I get to imagine these wonderful soundscapes around it. We came up with the title before we started writing the album which is quite unusual for us. That became the initial concept. Whilst it’s not about religion in any way shape or form, it is a very spiritual album based on your inner thoughts and how life affects you. The inner battle of getting through to the end.”

They were clearly very proud of the new record and so they should be. A lot of sounds on Black Halo are refreshing and feel new. For someone that’s only recently started listening to the band, the album feels like an evolution for the band. “We’d been playing with lots of bits of static and shortwave radio, we’ve got an old receiver, just been using that for samples. It’s amazing what you find about two o’clock in the morning, when the atmosphere calms down.”

It’s experimentation like this that has made this record so desirable to new and old fans and reignited the excitement that a record should give both an artist and their fans. There was a lot of talk of bookends on the record, how it’s effectively a concept album, and the want for people to view the album as a story with threads throughout. “The album is like a book, it’s supposed to be consumed from start to finish and for people to get that experience for an hour and a bit.” Part of this book is the incredible music videos they’ve been creating to coincide with the single releases. Namely, the video for Flashpoint is something of a cinematic beauty. Talking of the video, Charlotte focussed on the amazing locations their director Matt Westrao managed to decorate, and the farms and buildings they utilised near to where they were based.

“We got down to the cellar as well and that’s underneath their house, it’s absolutely incredible and we emptied it all out and stuff but then Matt was really clever and put the lab in it, chains on the floor, all the things that are swinging and he was just brilliant, really talented guy.”

A lot of what Hybrid is about is working with other people like Matt to create something incredible. Collaboration is a key process in the music industry and Charlotte and Mike clearly know how to do it well. One of the largest elements of their career in the naughties especially is the remixes they constructed for other artists including U2, Moby, and R.E.M.

“A lot of the remixes, we don’t get to speak a lot to the artist afterwards, so a lot of the bigger ones we’ve done you only really get to chat to the management or label. I did actually have a long conversation with Jean Michelle Jare who’s a childhood hero of mine and he was really gracious and lovely.”

These collaborations tend to occur because of other people too. Close friends of theirs were to thank for the collaborations on their third studio album I Choose Noise. Talking of how people come to know one another in LA during their time recording that album, Mike explains that “generally, they don’t go for a pint with somebody, they go surfing with them and that’s how everybody knows one another, or they go running with them or they’re in yoga class together.” To which Charlotte comically adds, “we’re too lazy for that haha. We’ll be inside getting a studio tan.”

Their passion for collaboration, working with others, and helping others is something we massively commend. During the last 18 months, they’ve been creating a positive space for their fans to openly discuss what’s on their mind. “It’s been a very nice learning curve to learn what you should be talking about and phrasing it in a positive light. We’ve literally met so many amazing people, not just people that we work with but we’ve become actual friends with people that follow us on Twitter, and we chat all the time.We hope that attitude is going to continue. It feels like the internet and social media has gotten a bit more forgiving, a bit nicer, and a bit more open.”

Like them, we hope social media can continue to be something positive and those connections can continue to be made. On the topic of how the band came to where it is now, Charlotte briefly jokes, “when I joined for ‘Disappear Here’, Mike was looking for a vocalist and it urm… got a bit more than that haha.” It’s clear they have such a great chemistry on and off the record which is comforting to see.

Speaking on the topic of how the next record is shaping up and where they want to take the live show, Mike states, “we’re desperate to do huge orchestral sounds so that will probably be the next one. It’s been quite difficult to book gigs this time though because every man and his dog are coming out to play.” But despite the difficulty of booking shows, they seem very excited to play the ones they have in the diary. “Can’t wait, literally can’t wait because it was written with more guitars and more live drums than we’ve probably done before. When we were touring the last album, Stu and Si had to learn everything from scratch because they didn’t have any involvement in the writing.” From the sounds of it, we can expect some spectacular things for their live show.

Towards the end of our conversation, we moved onto the topic of the state of the music industry and the change that still needs to occur despite the ever-shifting nature of it over the last 18 months. Mike begins by saying “it’s gonna be good to see more female-fronted bands and more female-orientated bands actually being pushed forward especially for live and for festivals. I think next year’s gonna be a really good test of what’s gone on over the last 18 months” whilst Charlotte adds, “there’s still this stigma that if you’ve got a female front-person, they’re not putting in as much effort as the rest of the band.” This has been a huge topic of conversation recently and we’re extremely happy to see that change is being made but as Charlotte says, there are still significant changes to be made but we’re on the right path.

“I do think there needs to be a shake up in the way people see music as not just something that’s just readily available that you can have whenever you want. The amount of time, effort, finances that go into making an album like Black Halo, is huge. A lot of people don’t realise that music costs the artist a huge amount of investment, time, and money. Emotionally, physically, and financially.”

This is something that doesn’t usually get brought up in many conversations because it only really occurs for artists and the people behind the scenes, not the consumer. Raising awareness of the fact that music costs an incredible amount to make and a live show takes considerable effort and finance to construct is imperative. Getting rid of the thought that gig tickets or physical/digital music is too expensive is vital to the longevity and sustainability of the industry. “We get emails all the time from people saying, I want to use your music on my film for free, and you’re just like, that’s just not how it works.”

Despite what might sound like a negative finish, it was actually really refreshing to share these issues and made us feel like we’re sharing the problems, on the track to making positive change. Mike’s final words were simply “so, let’s hope.” As things begin to restart and return, hope is the primary thing we have. It was a pleasure talking to Charlotte and Mike and we can’t wait to see them on the road.

Hybrid’s new album Black Halo is OUT NOW and available on all streaming services. You can also purchase physical copies and merchandise from their website: https://www.hybridband.com