Think of Pennsylvania, and you might think of the Mason-Dixon Line, Quakers and Bill Cosby. You probably wouldn’t consider it to be the backdrop and inspiration for kick-ass and gritty alternative electronic bands. You’d be wrong though; because not only is Pennsylvania the old stomping ground of Trent Reznor, but also of rising stars Innerpartysystem. Both bands seem inspired by similar themes of urban deconstructionalism, decay and a suppressed anger for the modern political system and society, so we were keen to talk to Innerpartysystem in order to gain a little more insight into their music and their plans. 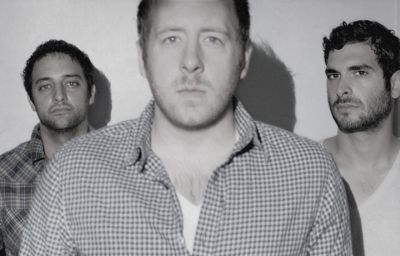 Things have certainly changed a lot for the band over the last couple of years. For one; they’re a member down: As vocalist Jared Piccone says, “Jesse [Cronan], our keyboard player left the band at the end of 2009 to pursue other musical endeavours. There was no bad blood, we still talk and hang out with him when we are home.”

You might think the change in the line-up to be indicative of a more rock-based sound coming through, but we were assured that the opposite was taking place. “We have also learned a lot more in the electronic direction. We still have drums, but for the most part, the rest of the sound is comprised mostly of synths and samples.”

Isn’t this quite a departure for them? Perhaps a musical change of heart? It seems not, to take the words from the horse’s mouth: “It’s where Patrick [Nissley, vocals] and Kris [Barman, synths] and I wanted the music to go from the beginning. Sometimes when you get stuck in the major label system, things don’t always turn out how you want them to. We never meant to be a rock band. How the band was perceived the first time around in the UK was a mix of what we wanted, and what Island Records wanted. Now what you will get is 100 per cent of what we want to give you.”

And that’s the crux of the matter: Artists are not the free spirits that we often consider them to be; they are beholden to their label. So is the more electronic sound perhaps at Red Bull Records’ request? What kind of influence do they have on the music?

“None. That’s why they are awesome. They let us do whatever we want” – A message that new and up-and-coming bands should perhaps pay attention to. Signing to a label can restrict a band artistically, but it doesn’t have to be that way. It’s possible to hit the big-time and retain artistic integrity – It just sometimes it takes a while to get there.

So then, what are our ears due to receive? The recent single ‘American Trash‘ might be a pointer…but this theory is soon shot down. “That song stands on its own. This next album is going to be in a bit of a different direction. I love ‘American Trash‘ but I’m not sure it’s the best song to come out of the gates with as a reintroduction to the UK.”

What then, should we be listening to, in order to get the IPS vibe? “I can’t think of one [track] that properly describes our band as a whole. The only way to get a proper idea of what we are about is going to be listening to our new EP in its entirety.” It’s a somewhat broad-brushed, but ultimately fair answer. Backing up that UK re-launch, we probed the band as regards touring here. “UK crowds just have this certain energy that can’t be topped anywhere else.”

That last sentiment is something that we do tend to hear a lot, but you get the feeling of sincerity here. Does that alone guarantee a tour next year though? “We don’t have any plans yet, but one would assume we will be back to do an entire tour later in 2011. It all depends on if there is a demand. If we can sell enough tickets to get back over to the UK and play shows, then we will. “

So with no rock-solid tour plans for next year and our time running short, we’re keen to hear what the band are up to in the future. The reply is simple, but heartfelt: “Make music, play music, smile a lot.”