Alkaline Trio are known for their hypnotic and contagious brand of punk rock. Gracing stages and music channels for over 15 years there has been no stopping this Illinois trio. On their recent trip to the British shores drummer Derek Grant was kind enough to share his wisdom with us. 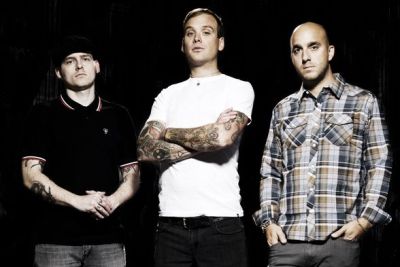 In recent times, AT have taken their sound in a new direction with their 2011 album ‘Damnesia’, re-recording many of their hit tracks acoustically as well as penning new material. Derek states that to mark the 15 years of being a band they wanted to do something different and not just journey down the route of a Greatest Hits record or creating an entire album from scratch, “I don’t think we were prepared to do an acoustic record of all original, new material so we just kind of fused the two things.”

You may think it made quite a change for the band to record solely in acoustic but this was not the case as Derek reminisces on the fun and laid-back feel of the entire recording process, “It was the easiest session that we’ve ever done.” He says, “most of the songs start as acoustic,” and “you can strip it down to the bare track itself and it reminds you of why it was written in the first place.” However not everyone is a massive fan of the new acoustic material versus their usual all-out aural assault. “We do four or five acoustic songs every night and there’s always somebody in the crowd who’s screaming ‘Get on with it!'” Surprisingly, Derek is completely sympathetic, “I can imagine, just knowing the way I would feel as a fan of a band, I’d be very interested in hearing the renditions, but there’s also some bad connotations that can come up, like ‘are they running out of material?’ Or ‘does this mark the end of the band?'”

Don’t panic Alkaline fans, that is definitely not the case. “We wanted to revisit some of the old songs but we also wanted to include some new ones,” Derek says, “It was a matter of putting enough new stuff on there so if people, y’know, don’t wanna hear the old songs there’s a couple things of interest for them.”

It’s not all Alkaline Trio for Derek Grant, though. He has plenty of other projects that also occupy his time. “I’ve been working on some solo stuff for a few years that’s oddly a little bit more like folk and acoustic-based. Hopefully, I’ll be able to release something this year.” He is also kept busy with what is quickly becoming known as a Chicago Punk supergroup, Dead Ending where he collaborates with Joe Principe (bass player of Rise Against), Jeff Dean (guitarist for Chicago based punk band The Bomb) and Vic Bondi (vocalist for the legendary Chicago punk rockers Articles Of Faith). Derek laughs “We’re just having fun playing like old hardcore.”

But again, Trio fans don’t fret too much, Derek isn’t done with you yet, “We’re all trying to keep busy doing stuff and we’ll never lose focus on Alkaline Trio but it’s nice to just kind of branch out and do some other things and then get back together and work on something fresh.”

This freshness has allowed Derek to develop as a person and a musician through his time spent with the Trio. “It’s been very instrumental, it’s played a very integral part in my growing as a human being and musically it’s been like, I’ve learned so much and I feel like I’ve evolved so much.” One aspect of Derek’s musical evolution is also down to the techniques used by the band original drummer Glenn Porter, “Glenn had a very different style than I do and I find it very challenging to play his stuff.” Though it’s a challenge Derek thoroughly enjoys, “It is a lot of fun because I’m putting myself sort of in his shoes.” Another is through his constant need to push himself musically, “The stuff I’ve done with the band, I’m constantly trying to evolve it, like the soul of it, so that stuff is really challenging as well, just in terms of trying to push myself and feel it more.”

When you listen to any Alkaline Trio track it is clear that they take inspiration from many different areas. Derek says, “We’re always influenced by life, first and foremost.” But, the band are also highly influenced by other artistic forms such as art, films and literature, “‘American Psycho’ is really good. ‘House of Leaves’, if you’ve never read ‘House of Leaves’, read that!” But one rather unusual source of inspiration for Derek is dance. “My girlfriend was a professional dancer when she was a teenager and I can’t dance, I will not dance.” His own inability to move has always been a source of fascination, “That’s always been a strange thing for me because as a drummer, rhythm is huge, as a dancer rhythm is huge, but I can’t bridge the gap between drumming and dancing.” So driven by curiosity, Derek has been learning about the techniques used in choreography and this has helped him enhance his drumming skills, “I realised that what I do as a performer is a sort of dance.”

So whether it is his girlfriend’s dancing history, literature or film, Derek seems to be able to draw inspiration from many far out places and through this is able to evolve musically. Although he claims he has changed since starting with the band in 2000, he is still able to keep the original sounds and goals of Alkaline Trio in his sights; playing music for both band and crowd to enjoy.