Alt-J (Δ) are a band that are all about the music. They have lived beyond the hype. A four piece made up of Gwil Sainsbury (bass/guitar), Joe Newman (guitar/vocals), Gus Unger-Hamilton (keyboards) and Thom Green (drums), they have created an album that is awesome, both sonically and cerebrally. An alternative indie pop band with interesting quirky lead vocal, they have been hailed as Radiohead’s young pretenders. We chat to Gwil about touring, starting out in Leeds, idols and creativity. Smashing! 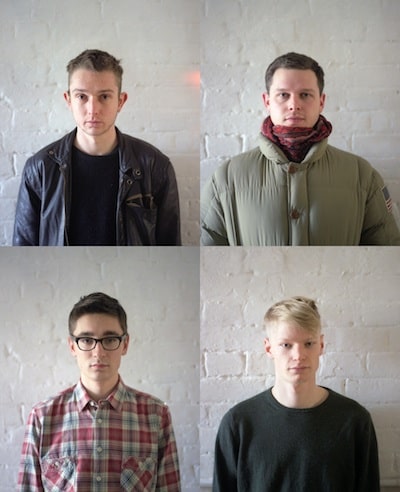 “Django Django or The Maccabees to win,” says Gwil. He’s talking, of course, about their recent nomination for the Mercury Prize. “We’re not too worried about winning; it’s just pretty cool to be involved, just to go to the evening. I think what we’re scared of is because of the whole betting thing. I’m a bit concerned that the camera is going be on our table and when we don’t win, they’ll just be filming our reaction. Trying to smile, not cry. Winning it would be great, it just doesn’t really matter that much. It’s just not really what it’s about. Sometimes, The Mercury Prize is kind of a bit of a curse really- people have won it, and people have gone away, and there’s a lot of pressure involved for a second album.”

With a name that is unpronounceable (the delta sign), a penchant for avoiding showing their faces, and having a plethora of references to literature, film and art within their music, Alt-J could be seen as pretentious or even alienating. In fact, all they’re doing is assuming that you’re intelligent and inquisitive. The entire album (‘An Awesome Wave’) can be found on their Soundcloud page and alt-J have detailed the meanings and inspiration behind each song. However, Gwil doesn’t think that they’re definitive: “Different people want different things out of music. A lot of times when I was a kid and I was listening to music, I didn’t know what the words were so I just made up my own. And then I would find out what the lyrics were later on, and I’d always be disappointed. People take away from the lyrics what’s relevant to them, in whatever way is personal to them.”

Alt-J are so focused on creating music as something that is creative, fun and universal, that they did a remix competition when we released ‘Breezeblocks’. Without any real prize, they released the stems on Soundcloud and later announced their favourites. “It was really fun; it was something that I was always interested in, when I was listening to bands, just to have fun. Music software is something that a lot of people have access to now. I think that it makes it complete sense to let your fans or whoever remix your tracks. You get variations on your tracks, it’s free, everyone gets to listen. Some of them are really high standard, and some of them obviously aren’t, but it’s a nice interactive thing to do with their fan base. I don’t want to covet the tracks; I want people to get involved.”

Originally formed in Leeds while they were at university there, Alt-J never really intended to be a full-time band, they were just happy to create. “Because we were at university, we were just doing our course and doing the band in our spare time, kind of like a hobby. We were kind of isolated to be honest, just writing tracks in our bedrooms and our friends wanted to know what we were up to.”

We locals (at Soundspheremag) know that Leeds has a very strong alternative music scene with bands such as Pulled Apart By Horses, though Alt-J doesn’t quite fit in. And no wonder, considering they never really gigged or went to gigs during their time there. “We never really got into it in Leeds, so we weren’t very practiced at playing live. Although we did occasionally, it wasn’t something that we felt we had to do. We could afford to take it lightly, because it was just something we were just doing in our spare time. I think we were inspired by Leeds, but it was just more the situation, having a student loan and doing a course that meant you had a lot of spare time.”

Now living in Cambridge, the boys have had far more practice at playing live and have toured the festival circuit, Europe, America and even Australia this summer. “We’ve been away the whole summer on and off so I’m looking forward to coming home. It’s quite weird touring; you get yourself into a pretty bizarre lifestyle of being in the same group of friends that are also your colleagues. So you need time away from them, you need to go see other friends. It is quite incredible how much time you spend with your band mates. You’re quite aware of how much you’re in each other’s space.”

When asked who his idols are, who he’d perhaps love to remix or work with, Gwil refuses to give a straight answer. “Maybe it’s an odd thing not to have any idols. The people you consider your idols are always a little bit disappointing, something shatters inside. I’d quite like to meet Thom Yorke, maybe he’d be exactly how I imagine him.” It’s a very pragmatic, sensible answer and it’s one that seems to reflect the band’s ethos as a whole – concentrate on the sounds and pay no real heed to the rest of the world. “We’re just gonna keep riding the wave.”