American Head Charge is back. The masterminds behind long-standing alternative metal anthems like ‘Just So You Know’, architects of genre-defying albums ‘The War Of Art’ and ‘The Feeding’, and all-round chaos breeders have returned to the world stage to wreak havoc. Though, bassist Chad Hanks explains that they’ll be doing it a little differently this time around. 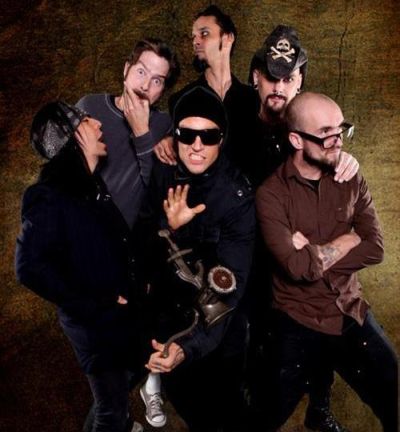 “I am so fu**ing tired of heavy metal” – Chad Hanks

S] In our last interview, you stated that there was a new singer for the band – what went wrong there?

C] “We had actually hooked up with a couple of gentlemen: the first being Dennis Sanders Jr., the bass player in Black Light Burns and the vocalist in his own band, now called Spirit In The Room. The second being Josh Bradford from the Revolting Cocks. With Dennis, after doing vocals on some AHC demos and a visit out to San Fransisco, it turned out he wanted to concentrate solely on his own material, of which he had tons. With Josh, it just kind of petered out, which was mostly my fault due to a ton of stuff going on in my personal life. The demos from both of those guys were amazing though, especially considering how horrible the other 300-and-some-odd submissions were.”

S] How have you personally (and the other members, as much as you can tell), been filling your time since the disbandment?

C] “I started teaching bass and guitar at the School Of Rock [Minnesota] in late 2008. It’s been the best and most fulfilling job I’ve ever had. I also show direct there, and run the Road Crew, which are the best of the best of the three schools here in Minnesota. There’s almost 50 schools across the country now, and even my niece in Burbank, CA is going to one. As far as the other guys, you’d have to ask them. Besides Justin [Fowler, keyboardist], I wasn’t really in contact with anybody until about a year ago, and I wasn’t in contact with Cameron until about six months ago.”

S] How is it working together again – have there been any great moments you can talk about?

C] “We start rehearsing in about two weeks, and everyone is still scattered across the country, but just emailing and talking on the phone with the guys has been wonderful. So far, it just seems like everyone grew up, a lot. We definitely had a severe case of arrested development going on for about 10 years.”

S] Was it a challenge to get Cameron back on-board, and how is he feeling right now?

C] “No challenge whatsoever. After not hearing from him for almost two years, he contacted me via email, completely out of the blue, with one of the demos I had sent him two-and-a-half years prior…with his vocals recorded on top of it. You have to remember, I closed-up shop on this motherf***** [the band]. Like, there was a ‘closed’ sign in the window; the whole shebang. And then the next day, two more arrived in my inbox, and then two more after that. The weirdest thing was, that in his first email, there was no pleasantries, no ‘Hey man, I know we haven’t spoken in two years…’. It was just ‘Here’s (name of song). I think the second verse should be twice as long’. It was a very odd but interesting way to get my attention, to say the least!”

S] How about new material, what direction is that going to take – full-on industrial rock, or something a little different?

C] “I don’t think you ever really know what a new record is going to sound like, unless you suck, and keep doing the same sh** over and over and over while slapping a new title on it. Tool, I’m looking at you. I’ve been very adamant, and very vocal, about not rehashing anything we’ve done before. This’ll probably sound utterly blasphemous, but I am so fu**ing tired of heavy metal at this point, it’s ridiculous. That said, the new stuff will be heavy, but not in the ‘metal’ sense of the word. I think we’re beyond that at this point. I’ve got 26 full songs sitting in my computer right now, but who knows what direction they’ll end up taking once we get everyone in the same room? It’s gonna be hard enough to get a couple of them to stop with the fu**ing drop ‘D’ tuning in the first place!”

S] Do you have any working titles for songs, or a record?

C] “Not yet, but we do have some artwork for our upcoming tour [AHC’s Tourette 2011] that involves a pink bunny suit, a large caliber handgun, and a broken ‘The Feeding’ mask. I’m sure something’ll come up, though.

S] Is there one song that you are working on now, that you feel defines the state of this newly reinvigorated band?

C] “There’s so much emotion and feeling flying around right now, that one song could probably never do justice to outlining how we feel at this moment. I think it’ll take a whole record to capture that. A lot of feelings; a lot of different types of songs.”

S] Are there any songs that you think will match the international impact of say, ‘Just So You Know’ or ‘Loyalty’?

C] “At this point it’s impossible to say. It’s hard to tell if a single will take off or not, there’s so many intangibles involved. But one song always rises to the top. We’ve never been told by anyone, ‘The album sounds great, but we don’t hear a single yet’.

S] When can we expect the first new AHC stuff to come out?

C] “Safely? Early summer 2012. But it could be sooner, it could be later. We’re in no rush. We’re not trying to ‘make it’ or keep any sort of ‘buzz’ going at this point. Hell, AHC’s been dead for four years, for all intents and purposes. We’re going to do this correctly and take the time necessary to re-work and strengthen the foundation of this machine. If anyone’s waited this long, a few more months ain’t gonna kill ’em.”

S] A lot of UK fans have been asking about a tour since the reformation announcement – realistically, can we expect you back as soon as say, 2012?

C] “We’re hoping to tie in a 2012 UK and European tour with the record release, which will hopefully coincide with all of the great festivals you folks have overseas.”

S] Last time we spoke, you guys were spread all over the US, has this changed – are you closer together, geographically now?

C] “Nope. Everyone is still scattered: Myself in Minnesota, Cameron [Heacock, vocals] in Huntington Beach, Karma [Cheema, guitars] in Los Angeles, Justin in Atlanta, and Chris [Emery, drums] in Indiana.”

S] What is driving the band at the moment, considering all that you have been through in the past – why make all the effort to bring it back?

C] “Because this is what we were created to do. Period. And I believe we all realise that we do it best within the confines of American Head Charge. Like I said before, we’re not trying to get our first record deal; we don’t have stars in our eyes. We’re doing this again because we enjoy creating what we do.”

S] Thematically, what is driving the band now?

C] “Survival. Growth. Perserverance. Tenacity. Well, that and the awful state of music in general. I mean, go back and listen to 20 random ‘metal’ albums from between 2001 and now, especially any band that was on Ozzfest or The ‘insert booze or energy drink brand here’ Killing The Chaos For Heaviness’ tour. Most of it sounds dated, not to mention you can barely tell one band’s songs from another. Now go listen to ‘The War of Art’. That album could have come out last year; it’s still musically relevant on multiple levels. Sorry, sh***y music makes me angry!”

S] With bands now releasing more and more stuff for free and through a range of mediums online for example, are there any special plans for releasing new AHC stuff?

C] “We’ll be doing all we can to stay the hell away from record companies and anyone connected to any of the ‘professionals’ we hired to manage our business affairs in the past. I still have not received one fu**ing dime from DRT Entertainment for royalties on ‘The Feeding’; we simply don’t have the money to audit them. And I’m still paying back taxes to the IRS because Universal dumped a sh**load of money into my bank accounts in 2001 and our trusted accountant (recommended by our wonderful ex-manager, of course) completely dropped the ball. I got a letter from the IRS in 2007 saying I owed $12,000 in back taxes. So, yeah, anything we can do to remain self-sufficient is our main goal in regards to releasing new AHC material.”

S] Are there any bands that you’ve been keeping an eye on that are influencing AHC right now?

C] “Nope. I haven’t really heard anything in the past 10 years that has influenced me. I’m still listening to PJ Harvey and Ministry and Tom Waits and Fugazi. The last ‘new’ thing I heard that I really liked was Kylesa. Although, there was this one band here in Minneapolis, a collective of sorts, that I thought was amazing. So I contacted them to see if I could be a part of it in some small way. Never got back to me. I guess my being in a stupid heavy metal band isn’t cool or something. Oh well, fu** ’em!”

S] What do you anticipate your biggest challenges to be as you are coming back now?

C] “Ourselves. It’s always ourselves.”

S] What would you like to say to the fans that have stuck with, listened to and supported the band while you have been gone?

“Thank you all. You’ve had more faith in us than we’ve had in ourselves at certain points, and to me that is truly inspirational. For this, we’re eternally grateful. Again, thank you.”