Former Something Corporate and Jack’s Mannequin front man, Andrew McMahon, brought his latest project, Andrew McMahon in the Wilderness, to the UK for a short run of solo shows. We got the chance to talk to Andrew before his show at The Key Club in Leeds last Friday about the writing process, playing solo shows and the transitions between projects. 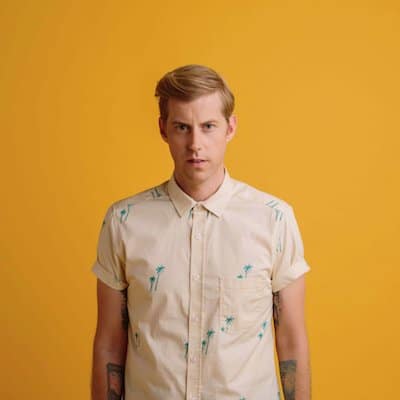 “Bold decisions are what lead to large outcomes”

S] Hi Andrew, thanks for meeting with us! How are things going? How has your time in the UK been so far?

A] “It’s been so fun. I don’t do a ton of these acoustic tours. I’ll go out and do a show here and there or do a radio gig and a half hour acoustic set, but to get to do a full hour and a half of this night after night, it’s a really cool exercise.”

S] What’s been your favourite show since you’ve been over here?

A] “My favourite show so far was probably Manchester. Truthfully, all of them have been really good, but I feel like there was something really special about that gig.”

S] Normally you’re known as playing with a full band, but this time around you’ve come to the UK to do a few solo shows. How has the experience been for you?

A] “It’s great. The thing about the solo gig is I’m the only one up there so there’s a lot more responsibility on my plate to do a whole show and try to make it feel dynamic when you don’t have the availability of huge dynamics. Going from a quiet song to a big song, the range is a lot smaller when it’s just a piano, but it gives me the chance to make the song more conversational and make it more about what the songs are about; where I was when I was writing them. I think that really becomes what drives the show, the stories in between and for me, that’s fun. It’s fresh, it’s not something I do every gig so to have a whole night of that conversation ends up being a lot of fun.”

S] Over the years you’ve become known for writing really personal lyrics relating to what’s been happening in your life. What is it like for you to have millions of people relate to these personal experiences?

A] “The kind of writers that I’ve always been attracted to were people who committed their personal lives to some extent to their lyrics so I think that’s what I grew up listening to. I think there are moments when you feel a little vulnerable, usually right when the record comes out and people hear it for the first time. That’s the most exposed I feel, just right when the song comes out. But I’ve been writing since I was 9 so I’m comfortable with the idea that that’s what makes for a great song, putting yourself in it and so I’m okay with it.”

S] You’ve said before that your writing processes have changed between writing for Jack’s Mannequin and Andrew McMahon in the Wilderness. What have been some of the biggest differences for you?

A] “With the last couple Jack’s [Mannequin] records a lot of them were written while I was juggling a tour schedule so even if I didn’t write them on the road so to speak I would go on a two month tour and then I would come home and write for the week or two I had off in between and then I would go back on the road. I was kind of constantly juggling two different headspaces and with this record I wanted to focus on developing a set of themes and diving into them and not pulling myself away from it before I got to the core. Not to say that I wasn’t able to do that with those Jack’s [Mannequin] records, but with this record being something that was new, I had to effectively build a new sound and a different sonic style also a whole new set of themes because of where I am in my life. I wanted to have the time to focus on that without being distracted.”

S] Do you notice a difference in how the songs are perceived by your fans?

A] “It’s interesting, I think at the core of all of my songs my goal is to write a great melody and a great set of words. There are definitely differences in the way I approached the writing and the way I approached the production on the record, but I feel like this record has found its way to people who have heard my music through all different stations of life and all different eras of what I’ve done. In a really cool way, I feel like a lot of people who maybe had fallen off and who haven’t been listening in the last handful of years have started coming back to it and I think that speaks to the level of focus that I put into this record. I really wanted it to be something for everyone, something for the masses and something that I can really connect to and project out to the world.”

S] All of your projects have their own individual sound and style. How have the transitions been between your different projects over the years?

A] “It’s funny because I’ve started over a couple times in this career of mine and certainly as you get a little bit older starting over becomes scarier. It hasn’t stopped me from hitting the reset button, but I think you have a little more to lose as you get deeper into this. I think there have been a couple moments where I’ve been like ‘oh my gosh is this going to work?’ and I try really hard to say ‘you can’t think like that, you can’t let fear motivate your decision making otherwise you can’t make bold decisions and bold decisions are what lead to large outcomes’. I think there are moments of pause where you just go ‘ok you’ve just got to step off that ledge and see what happens’ and for the most part it’s been exhilarating, it’s been a new adventure in every way and the shows have been so much fun. To have this much new material that you’re proud of, it’s a good feeling.”

S] Have you noticed differences in the audience attending your shows with each project?

A] “I think more than anything just because I took a little bit of time off and wasn’t touring as much, you definitely you see the deep connection that you have with the people that have been there for a long time growing. I think the cool thing with having radio support, at least back in the states at the moment with the record, is you see all these new faces in the crowd and I think more than anything what I’ve noticed is a diversity in the audience and a larger span, age wise, than I’ve ever had. You have people who have been with me for 15 years and you have high school aged kids who are just hearing these records for the first time and picking them up and coming out to the shows and I like to see that because I feel like that’s always been my dream for a show, playing to the mass rather than a niche market that looks like this or is this age so I think that to me has been the coolest thing.”

S] Is there anything outside of music that’s been influencing you lately?

A] “Music’s what I dig into the most. I’m a little bit of a TV junkie and certainly all of these amazing off network TV shows like ‘True Detective’ and ‘House of Cards’. A lot of those short season TV shows I’m really into. I spent my day off at the Tate the other day and that was incredible. I try as much as I can to dig into culture and be informed. But at the moment with all the running around it’s hard to get my hands on much else besides my baby and my piano. So I would say she and this new adventure as a Dad of a one year old is probably my biggest influence at the moment.”

S] What are your plans for when you get back to the states?

A] “A lot of festival and radio shows through the summer. I’m doing a lot of writing so I’ll be in Nashville on and off throughout the next six months working on new music, trying to jump on what ever’s going to be the next record. It’s almost not even enough to speak of, but a friend of mine and I are starting to kick around the idea of working on a musical so I’ve got a little bit of that going on. There’s always a few irons in the fire. This project has definitely led me to get excited about some other things I could get my hands into so it’s all on the docket for when I get home.”