A conversation with Steve Chandrasonic, the frontman of Asian Dub Foundation since their formation in London eighteen years ago, extends beyond the realm of music. 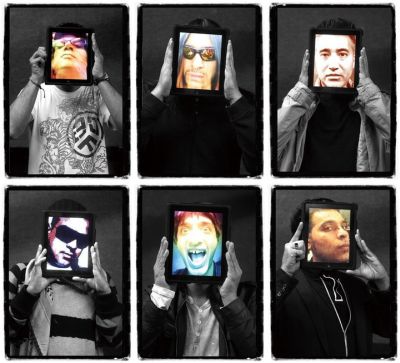 “I find the unknown to be my greatest inspiration.”

When we catch up with the guitarist, vocalist and writer, he’s watching an episode of ‘Dexter‘ and is happy to admit to us he’s an American television drama nerd. “The past decade it’s shifted, it used to be the shittest thing on earth,” he tells us. “In the past few years, it’s all been this amazing innovative and vital vibes going down from unexpected places.”

The unexpected is also a creative impetus for Chandrasonic. “I find the unknown to be the greatest inspiration; things I don’t know, things I haven’t seen before. For me, travel is great for that, and the more outlandish, the better.” He fondly recalls visits to Mexico City, and ADF’s first performance in India, but his most cherished experience was filming a TV show for Al Jazeera in the Sahara. “I’m not religious, but they have this idea in the desert that there’s nothing between you and God, there is no obstacle,” he comments. “Certainly, some of the cultures of the nomadic people, they have this idea with this huge space and geography they have, it’s f**king crazy.”

Chandrasonic has used place as a setting for his songs; whether it’s Mali or closer to home. ” Until recently, I was living in a really run-down tower block in London, but I wrote a lot. The track ‘A New London Eye’ on the last album; the lyrics are an observation looking out from the thirteenth floor out onto Peckham. Some of the lyrics, and the video, prefigure the riots. That was kind of spooky.”

Talk of recent world events brings us to discussing the intriguing cover art for ‘History Is Now’, designed by Steven Cook who has created the artwork for two of ADF’s previous albums, plays on the notion of a second Industrial Revolution. “It’s a kind of statement of now,” Chandrasonic comments. 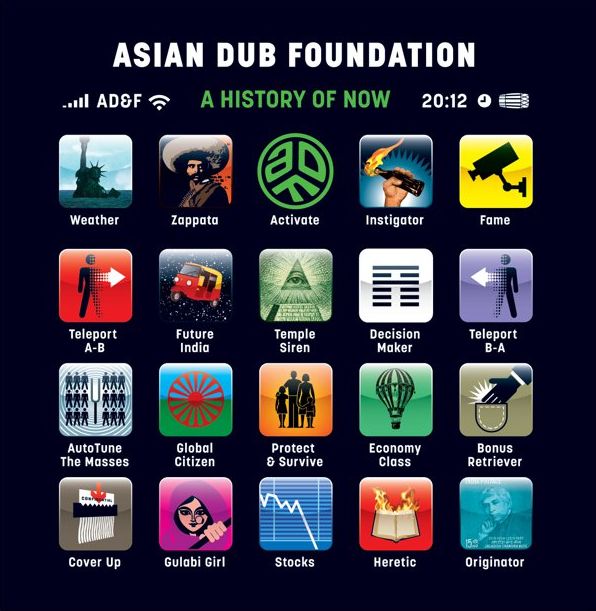 “I wanted to use the fact groups who’ve been around as long as we have tend to say, ‘We’re only interested in the latest album, I don’t want to think about what we’ve done before.’ I wanted to turn that on its head and use the fact while ADF has been around, it’s been another Industrial Revolution.” He continues, “I wanted to see all the emanations and manifestations of that, so there is a theme that runs through the album, not a particularly conscious one, just a general vibe about this second Industrial Revolution that we’ve lived through – it would be nice to comment on it a bit.”

The frontman goes on to discuss the significance of the use of the “apps” illustrated on the cover: “It’s such a symbol of today that the apps we have used are sort of a subtle shift in the meaning of them and what they can do. It’s like a mixture of Andy Warhol and Philip K Dick, I suppose; they act as a pop art symbol, but also, if you look at the content of the apps on the cover, they’re kind of frightening. If you go to the La Haine, you’ll see the meaning of them… some are slightly tongue-in-cheek, some are slightly serious.”

The subject matter of tracks on ‘History Is Now’ veers more on the serious side, with one track on the album, the instrumental ‘Spirit In The Machine’, bearing a strong significance to Chandrasonic. “It’s meant to sound like this shift in power to the East. My sadly-departed father would never, ever have thought in a million years that an Indian company would own Jaguar and Land Rover. Indian companies are buying up all these major symbols of British industry; it’s like some weird reverse colonisation, the sound of Indian and Chinese industry coming to trample over the West like the West trampling over them. I’m not saying it’s a good thing or a bad thing, it’s a massively noticeable shift of power.”

Chandrasonic believes the constancy in the current ADF line-up helped the band raise their game when it came to recording ‘History Is Now’. “The same band made this album as the band who made the album before; we did have a few line-up changes in this decade, but the band has been stable more recently,” he adds. “Musically, the band knew each other much better, and we knew what was possible because we’ve been playing for five years with this line-up; that was a good thing.” However, he also reveals ADF’s next album may provide a break from the politically-motivated dynamic manifest on the band’s catalogue of previous albums. “We’ve been trying to get away from feeling the need to have a mission statement,” he comments. “I think on the next one, I don’t think there will be, I think it will loosen up.”

Chandrasonic is excited about one particular mission he has learned about which has emerged from Asian Dub Foundation’s work – their impact on film culture and cinema production in the UK and internationally. He reveals the motivation behind Gandu, a cultural phenomenon which has recently emerged in London, came partly from one of ADF’s landmark performances. “The organiser called me in for a meeting and said, ‘One of the things that was a spur to me setting up Secret Cinema was what you did with the film ‘Enter The Void‘,’ where we rewrote the soundtrack and played it in front of the film”, he states. “That was really something; that made me really proud.”

A further cinematic cause for celebration has been Chandrasonic’s championing of the film ‘Gandu‘, recently shown at the London Film Festival. He describes the “first anti-Bollywood film” as the meeting point of ‘La Haine’ and ‘Enter The Void‘. “It’s basically about a Bengali guy whose mum is a prostitute and smokes crack, and he dreams and believes he’s going to be a rapper,” Chandrasonic explains. “The director [Q, aka Qaushiq Mukherjee] does all the rapping, and it’s fantastic. It does sounds a bit like ADF, but in a good way.”

He expresses concern, however, that the film’s setting will impact on its distribution and its reception in the UK. “This is a rock and roll film; it’s a psychedelic, punk film that happened to be made in Calcutta,” he remarks. “It has a universality about it. It could be up there with ‘Quadrophenia’ and ‘La Haine’ – but it won’t be seen that way. Some people might not get to see this film as it’ll be automatically dumped in the ‘Asian’ category.” However ‘Gandu’ is received in the UK, Chandrasonic’s patronage of film and director has lead to an above-board relationship between ADF and Mukherjee. The band will contribute to the soundtrack of the director’s next project; “It’s just a piece of music, but we’re spiritually quite close to it,” he adds.

This is merely one of a myriad of future projects and prospective ideas for Asian Dub Foundation. “We’ve started writing again, we’re rethinking the sounds,” Chandrasonic says. “We’ve made the last two albums with a live, raw and rootsy kind of vibe. We might go back into electronics again in a big way. We’re gonna loosen up the line-up as well; we played gigs with the full spec of people who contributed on the last album more recently, and that was enjoyable.”

Performance is an integral part of the band’s manifesto, offering a spark of vitality and untapping new audiences for their sound. Chandrasonic reflects, “The one thing that always seems to keep us going is the live shows. Even if I’m feeling we’re a bit past it, when we do a great live show, then that changes. At Larmer Tree Festival this year, most of our audience there was 17. The place just blew up! It was like the first gig we played in India at the end of last year,” he says. “After 17 years, you can go to new territories, play to young people or people who’ve never seen you before. You’re this mythical group, and you deliver, and the place is on fire; then you know you’re doing something right,” he proudly observes.