Backstage at Leeds’ Met University on another stop on their ‘Still Reckless’ tour, Asking Alexandria’s lead vocalist Danny Worsnop takes time to discuss just about everything from their opening slot for Guns ‘N’ Roses to branching out on his own. 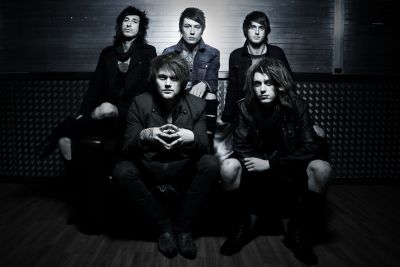 “We want the next Asking Alexandria album to be a gold record.”

The band (originally from York, North Yorkshire) may now have a bigger fan base across the pond, but Worsnop is unfazed by the band’s return to England and shows in lower-capacity venues. “I enjoy the intimate shows. None of the venues on this tour have really had a capacity over 2,000; we’ve been playing smaller, more scaled down shows and it’s a really interesting thing, coming straight from the tour we did in the US, where we were in arenas and there were thousands of people.” He concedes: “However big our crowds are in the US, the crowds here are always far more intense. It’s an awesome feeling.”

Talking big shows, Worsnop explains the curious events that led to the band supporting Guns ‘N’ Roses last year: “We found out that we were doing it at about 2.00am and had to get equipment together and get to the show as soon as we could. At the time we got the call, we were in Florida. Four hours later, we were on a plane to New Jersey. We got there, got all our equipment ready and within about eighteen hours of taking the phone call, we were on stage. It was a crazy day.”

“The reaction wasn’t great,” Worsnop concedes. “I did learn that Guns ‘N’ Roses fans aren’t necessarily Asking Alexandria fans!” In spite of that, he observes: “It was an incredible experience and I’d do it again in a heartbeat.”

Having reached such lofty heights and lived to tell the tale, Worsnop dispenses the following advice to unsigned bands in their small home city, and around the UK: “Get out, get your name in as many places as you can. You’ll never get anywhere if you just stay in one place. Don’t just sit in your hometown and build a following with local shows there. play in other places. Get as far away as you can from your home and play as many shows as you can, to as many new people as you can.”

Those endorsements carry a word of warning though: “Running a band like this is much more difficult than people think. We don’t just go on-stage and play music. This is twenty-four hours a day, seven days a week. We don’t get holidays. Rock and roll doesn’t sleep.”

Speaking of not sleeping, writing for the third Asking Alexandria record is already underway and Worsnop is very excited about it. “We’ve already starting writing and getting some stuff down. I’m excited about the approach we’re taking with this new record. It’s another progression and another step up the ladder for us.”

Worsnop is keen to stress that despite their non-stop work ethic, Asking Alexandria is cautious enough to give the writing process time to breathe. “It’s very difficult trying to top what we’ve already done. We’re aware that this next album has to be better than the previous two, because the second we don’t better ourselves, someone else will become better than us. We’re very proud to be on top of our game, and on top of the pack so far.”

We ask if the recent remix album (‘Stepped Up And Scratched’) featuring the likes of Celldweller and Big Chocolate re-interpreting AA material is any indication of the band’s new direction. “The dubstep thing? We’ve done that, laid it to rest and we’re going in a new direction. We are looking into having a DJ on the upcoming record, someone more along the lines of DJ Lethal from Limp Bizkit or Sid from Slipknot. Something scratch-based. It’s something we’ve never done before and we’d like to explore that.”

Alongside the process of moulding the new Asking Alexandria record, Worsnop is also prepping a solo album. He tells us that the approach is completely different to an Asking Alexandria record and as such, he’s drafted in musicians that wouldn’t fit with that band’s aesthetic. “There are some incredible musicians behind the solo record,” he explains, “A guy called Bruno Agra who used to play drums for Lady Gaga, and a guitarist called Jeff George who played guitar for Eminem.”

“We’ve been writing and just booked our first batch of shows for the solo stuff,” Worsnop continues. “I’m really excited to just get the CD out. We’ve got thirty-eight songs ready. We should probably stop writing or the first CD’s gonna be a box-set! We’re putting a lot of work into it. I don’t want it to be classed as a side-project. I want it to be its own entity all together.”

When broached on revealing how the final solo product will sound, Worsnop plays his cards pretty close to the chest. “However much I love the music that I write with Asking Alexandria, and however much fun I have making it and playing it. It’s not music I listen to. This album means that I get to create music that I truly love. The songs are a lot more personal.”

Following a relatively quick immersion into the world of rock and roll, it seems apparent Worsnop is knuckling down in certain aspects of its lifestyle.  He is quick to point out that it’s not just him undergoing this shift; “We’ve all grown. personally though, I’ve had my issues with substance abuse, It’s taken a long time, but now that I’ve dropped the drugs and the alcohol, on stage, I’m hitting notes I couldn’t dream of hitting six months ago. It’s an incredible feeling now, being the best I can be.”

When we ask whether his experiences will be reflected in the lyrics to either of his new albums with the band, or solo, the frontman is emphatic: “There’s nothing more appropriate to write about. I’ve gone through so much in the last couple of years, that it would horrible to not put it down and share it with the world. You could say that I’ve made mistakes, but I don’t regret them. If someone else can learn from them, then I’ve done nothing wrong.”

In sobriety, we ask what Asking Alexandria’s earlier songs mean to him now. “The songs still mean the same things to me. Every time I sing them, it takes me back to the mind-set I was in at the time we wrote them. They are emotive, which is why I think people connect with them, you can tell the lyrics actually mean something to the artist performing them.”

All this talk of growing up and getting clean makes us wonder if the band’s expectations or ambitions have changed at all; apparently not. “We always had the intention of being a very big band,” he points out. “Our expectations of what it meant to be a very big band were a bit low. At the time, we thought that selling out venues with a capacity of two thousand made you a very big band. In the grand scheme of things, that’s not even scratching the surface.”

Worsnop continues, “Now we’ve played bigger shows and surpassed our initial goal, our intention is still more or less the same. We’re still striving and pushing. I don’t think we’ll ever be happy; we’ll always be pushing to be bigger, to play to more people, to be a better band. I don’t think we’ll ever be able to sit back and say, ‘Okay, this is where we want to be’.”

Seen as we are talking of rebirth this early in the year, we were curious of any resolutions made by Worsnop or Asking Alexandria for 2012. “We made one as a band,” he adds. “We want the next album to be a gold record. If we work hard and do this record justice, I think we’re capable of it.”