Professional athlete. Actor. Entertainer. Master Debater. Karaokist. Comedian. These are just some of the talents showcased by Austin Aries. Here at Soundsphere HQ, we are big fans of the current TNA X Division champion Austin Aries. From his driven intensity and exceptional skill to his cocky demeanour and dirisive humour, Austin has circled various wrestling divisions, breaking records and grabbing titles as he goes. He is the one and only two time Ring of Honour World Champion, the longest reigning X Division champ in TNA, and one of the most intense wrestlers on the current TNA roster. So we were lucky to catch up with him after the companies recent visit to the UK for a series of shows, to talk about his attitude to wrestling, what makes him so driven, and his recent appearance alongside Alex Shelley in Get Cape, Wear Cape, Fly’s latest video for their new release, ‘The Real McCoy’. 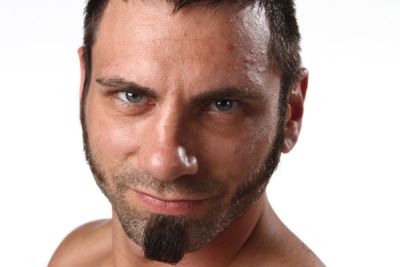 S] You were recently announced the longest reigning X Division champion in TNA history. How does it feel, at this point in your career, to be earning such a merit?

A] “For me, it’s part of the course. Everywhere I have gone, I have held titles and earned accolades, I have set records and that’s a big part of the way I work. In previous promotions I have set records there, and now I’m setting records here. Last night I sent a tweet live during my match, which is a first during a live PPV. I’m all about raising the bar. Now I’m the longest reigning X-Division champion, I cant see that coming to an end any time soon.”

S] Last year, there was a lot of rumours about you retiring. What has inspired you to keep motivated and keep getting back in the ring?

A] “When I was at that point, it was a big opportunity that TNA offered me, and I picked it up and just ran with it. One thing that’s always been important to me is I have never wanted to feel like a prisoner to the business, I’ve always liked to do things on my own terms. And that point I felt like I maybe wanted to transition, and do some other things, because I wasn’t given the opportunities I wanted within the business, to compete at the level I wanted to compete at. So when TNA contacted me and offered that opportunity I just went with it.”

S]  You recently appeared in Get Cape, Wear Cape, Fly’s new video. How did that come about?

A] “Honestly I just got an e-mail that asked for our inclusion in the video, and we were over there for the UK tour, so we dropped in and filmed our parts. It was good fun, and I’ve listened to the band, a few tracks I really liked. I felt glad that they wanted to use our talents for the video. It was a really good time. I really liked the band name, y’know I thought it was appropriate, and pretty funny they’d asked me to perform for them, since I have cape, wear cape and fly!”

S] How different is performing as a wrestler, from other work you have done?

A] “This wasn’t new to me, as I’ve done commercial work and other things in front of the camera. But yeah, you don’t have a director yelling ‘cut!’ in wrestling, but you get the opportunity to re-shoot to get things perfect when filming. It was a little less pressure to work in that way for this video.”

S] What kind of music do you personally enjoy?

A] “[Laughs] I listen to anything except country. I have a broad taste, I like anything that has a good message to it, at the same time, I like something with a good beat. For me, music is all about emotions and moods, so I like a wide range, depending on how I’m feeling. As long as it’s good music I appreciate it.”

S] Have you thought about branching into other forms of entertainment?

A] “I’ve always fancied myself as a ‘jack of all trades’. And obviously I’ve always been involved and have a passion for the entertainment business, there are a lot of different facets to that. So if opportunities present themselves, If they make sense I’ll explore them, whether inside wrestling or outside that, I always keep my options open.”

S] You’ve developed a huge fanbase in your time as a wrestler, specifically quite a cult following. How do you feel about that?

A] “As a cult wrestler, I built up a fanbase over twelve years, and now I’m on a bigger stage which instantly makes me a little more accessible. Fans of mine know what I bring to the table, I give it my all and do everything to entertain the fans. Whether I’m being cheered or booed, my performance always beckons a reaction.”

S] How do you feel about your popularity amongst UK fans?

A] “I’ve been over there for years, even before TNA, I’ve been in the UK quite a bit for other promotions. There are really passionate fans over there which I really appreciate, they’re not spoilt, so they appreciate getting to see top calibre wrestling. I love going over there, I love the energy they bring. As performers we feed off that, and as they give us more energy we give a little extra in our performance!”

S] Do you feel as though your still learning from the wrestling industry?

A] “It’s kind of a cliché but you know what they say, that you never stop learning, but I think it’s true, especially in this business where there is so much to learn from other competitors. Coming back to TNA has been a great opportunity as I work alongside people who have been doing this a long time, even longer than I have, at an even higher level. So wrestlers like Sting, Bully Ray, Ric Flair and Hulk Hogan; just by working alongside them you can’t help but learn even more. You’re always learning in this business, and if you’re not getting better your getting worse.”

S] Any advice you’ve been given that has resonated with you that you could give to fans?

S] What aspects of your career would you consider the most challenging?

A] “Staying organised is a big deal! And, having to adapt to the schedule of being on the road and still taking care of everything else. Also taking care of the business side is also a challenge, I see myself as a contractor and therefore a lot of the business falls down to me. Also, when you don’t have a structure around you, you have to set yourself one to maintain and make sure you get the things done that you have to do. We have to keep our bodies in shape, and also travel a lot and balancing all these things is often the biggest challenge.”