Packed with second album hype and the prospect of being a trio (after the acrimonious split from vocalist Tyondai Braxton); 2011 has been a busy year for Battles. Constant touring to support the release of their second album ‘Gloss Drop’ has given them the opportunity to trek around the world with new material and even collaborate with the likes of electro-rock leg-end Gary Numan. Soundspheremag managed to catch up with the band’s bassist and effects guy, Dave Konopka to find out more. 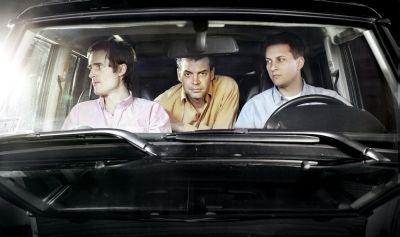 “We’ve learned to pick up the pieces”

Talking to Battles’ bassist, is it clear that ‘Gloss Drop’ is the product of a band who have overcome a monolithic shake-up to the original outfit and have flourished regardless retaining strong focus: “Over the course of the year, we just kind of improved and got better and better at playing the songs and becoming a new band as a three-piece,” Konopka recalls “I think that it’s obvious we worked really hard to get to this point and really the moral of the story is that ‘Gloss Drop’ and all of the setbacks that we’ve overcome…whether you hate the record or love it [as a listener], it’s a tremendous accomplishment for the three of us.”

One thing that this group has always been is innovative and interesting. The sound of Battles is more than just a trio of musicians working wholeheartedly on a project together, it is a creative progression that pushes the limits of what their instruments can do, and that type of creative condition is not without its challenges: “I’ve seen development over the years of my creative process and I am now more in tune with that. It feels good when I’m hitting the right kind of notes, and it feels really shi* when I’m staring at the blank page.” When we spoke to Gary Numan this summer, he was full of praise for the New York natives and spoke of his interest in collaborating with a group who really were producing something new and different. Numan provided vocals for ‘My Machines’, the second single from ‘Gloss Drop’ and even starred in the music video. Konopka responds with the glee of an admiring fan: “He was amazing, it was really great working with him, we asked him – just totally throwing it out there never expecting that he would be interested, and when he was we were totally psyched.” The band had nothing but a high regard for him in return also: “It made for an excellent song, he completely complimented the style of it in a way we’d never be able to do. We’re extremely grateful for the chance and opportunity to work with him.”

Plans for 2012 remain unknown for the band after curating a show in London on December 10, and it appears that Konopka and co. just want to take a good long rest after a year of solidly performing tracks from the album. “What are the three of us giving each other for Christmas?” laughs Konopka, “We’re giving each other space for Christmas! The gift of not seeing each other for a couple of weeks!” Ultimately, this incarnation of Battles has earned its grand reputation for creating top-notch progressive sounds and picked up vast knowledge while doing it around the globe. It is abundantly clear that they (Ian Williams, [guitar, keyboards], John Stanier [drums] and Konopka) have grown to understand their journey together and the pressures that may still come with that: “We’ve learned a lot about how to move forward, work hard at what we do and we’ve certainly learned to pick up the pieces.” Konopka assures us confidently. Whilst the next stage of the band’s evolution is not yet clear in their minds as of yet, we can be certain that they will indeed stay motivated and battle on (yep, we found a way to use the word…) for many albums to come.