Harriet Bevan is a busy lady. Not only is she studying a Masters of Arts degree in old London town, but she is the front woman of the increasingly popular Leeds goth troupe, Black Moth. Still celebrating the recent success of their debut album, ‘The Killing Jar’, you would think she would be taking a well earned break, but no. She is gearing herself up for the promising year ahead starting with a tour with Bristol rock band Turbowolf. 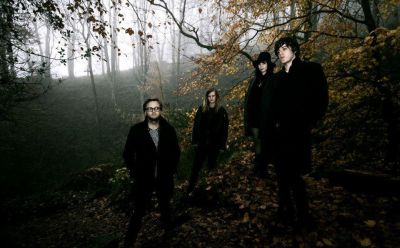 “I live a pretty dysfunctional existence”

Since she is touring the UK instead of attending two weeks of her Masters course (not that we endorse that type of thing…), you know that Black Moth means more to Harriet than anything else in the world, “I’ve got my interest in art and other things as well but you know the band always comes first, it is always been a priority.” She justifies her missing classes, “That’s exactly what you are in a band for, the best part is the touring and getting around.” Yet, Harriet is not only confining herself to UK shores, “I’m desperate to go back over to Europe as well. We had some of the best times of our lives over in Germany and Holland and I really want to take it over there.”

Harriet aims high, but still appears extremely humble, grateful to everyone who Black Moth is lucky enough to meet and work with. One guy in particular is Jim Sclavunos. Jim has not only been part of some of the most influential bands in history (Nick Cave & The Bad Seeds, Sonic Youth, The Cramps, Grinderman…the list is endless) but helped Black Moth with their debut album. Now that is something to tell the grandchildren. “We were a little bit dazzled by him to begin with but as we’ve got to know him, he’s just a really great guy; a really interesting creative bloke.” With over 34 years experience in the music industry, we’d think that maybe Jim would be less hands on, a sort of guru, but Harriet says, “He just puts so much into it; he has so much energy for any situation.”

And he’s not alone. Harriet is working her proverbial socks off. Balancing, a Masters degree, fronting Black Moth and a part-time job she barely has time to sleep, “[It’s] a pretty dysfunctional existence to be frank.” But Black Moth is her true calling, “The band has always been the most important thing in my life and I absolutely love doing it and it’s not even really an option not to do it, so everything just has to kind of fit around it.”

But her career has not caused her to forget her northern roots, “The music scene up there is just incredible, with the amount of amazing bands we’ve got, every weekend there’s incredible gigs on and there is such a supportive network of bands, promoters, artists and people who just work really hard to make it really special.”

We at Soundsphere are intrigued to know if Harriet thought the perception of moving to London to become a success in the creative industries is really true. She doesn’t agree. She says, “With this internet generation, there is no real dire need to be in a capital city. Just get there as often as possible as that is where a lot of the industry is based, you know, just play there.” Although she is not bad-mouthing the capital, “There are still great scenes in London, I’ve really enjoyed being down here and I’ve met some amazing bands, but I think there’s something to be said for living in a smaller, cheaper place with a tighter community and you have access to cheap rehearsal space.” Her advice to bands who wish to establish themselves is “At least establish yourself in a slightly smaller scene and then if you want move to London later for broadening your opportunities, which is not necessarily better, then that can be considered.”

We were also interested in what really inspires a creative mind such as Harriet’s. “I love film and I love literature and a lot of my inspiration comes from that.” So, creativity inspires creativity in Harriet’s case. “I like a lot of Gothic Horror, so I think that definitely comes through in the lyrics. Yeah and the Romanticism movement as well, I think it suits the tone of the music.” So less surprising than one might think, gothic horror inspires rock music!

However, there is more to Harriet’s lyrical inspiration than Dracula’s gory habits. Many of Black Moth’s top tracks have been inspired by more unusual things. ‘Banished But Blameless’ was brought about by a more high brow topic, “Ablata at alba is a palindrome that I came across once and it just really interested me, it’s Latin for secluded but pure, banished but blameless and literally just those words inspired me to think about what that means and the song just literally came from that.” However the track is not as historically charged as one might assume. Harriet uses this phrase to talk about much more modern problems, “I think growing up in mainstream society can make you think that if you don’t think in a certain way then there’s something wrong with you.”

Another major tune, ‘Blackbirds Fall’ is highly fitting for 2012. Based on one bizarre event in America where over 5000 blackbirds fell dead or dying from the sky over night. You may have read about it. “The footage of it is just absolutely incredible; literally just people trying to drive around side-stepping around loads and loads of died black birds.” Harriet finds all of this end-of-the-world stuff fascinating, “I’m quite interested in how every generation likes to think it’s going to witness the end of the world in a funny sort of way and how there is this strange fever for the apocalypse going on, especially it being 2012.”

The apocalyptic theme is continued in the band’s video. Filmed in Brighton, Harriet says “It was so much fun.” The video also stars another of Black Moth’s famous friends, James Hair (Bassist of psychedelic rock group Neils Children), who now has a rather differing profession. “He’s the guy who’s the mad pie-man in the video and he did sort of leave the music world to become a pie man that’s actually what he does by trade, that’s why he has all those incredible tools for the chopping scenes.” Harriet says James took a different meaning from the 5000 dead blackbirds, “He sort of evoked images of that nursery rhyme about four and twenty blackbirds baked in a pie, Sing a long a sixpence.” This really added a trippy feel to the video.

So hoping that we all survive the end of 2012, what lies in store for Black Moth? Although excited about promoting ‘The Killing Jar’ with Turbowolf this autumn, Harriet says “We are itching to get writing that second album now.” She says, “There’s ideas flying around and we’re really excited about that.” However, it’s not going to be easy, “The main challenge really is just writing a second album that is even better than the first.” Harriet is clearly very pleased with the praise Black Moth has received so far. And who can blame her?

2012 has truly been the year of the Black Moth and although members have been stretched across the UK by other commitments it is clear that the band is always priority number one. Harriet is one creative lady who cannot contain her talents to merely music but must spread it to art and even talks of starting a music magazine, “I’m plotting to start a music publication or magazine called Relic, which you are the first to hear about this, but it’s not finalised yet.” We at Soundsphere wish Harriet success with her Masters and other creative projects.

Black Moth begin their tour with Turbowolf next month. ‘The Killing Jar’ is available now.