The Soundsphere team watched Blacklisters demolish Beacons Festival last weekend, before catching a few words with the band themselves afterwards. Here’s what they learned. 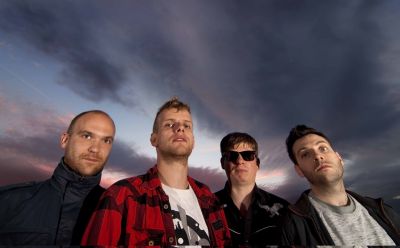 Blacklisters fester on Beacons Festival’s Noisey/Vice stage during their sound check, a throbbing pustule of concentrated hardcore, waiting to burst over the masochistic mob below. Frontman Billy stalks the audience, mic in mouth, growling and flirting, waiting to unleash his band’s distinctive strain of visceral, slurred punk upon his audience. The whole thing reeks of Leeds’ alternative underbelly.

As they launch into their set though, you instantly forget that Toots are this evening’s headline act. For the Soundsphere team, the evening certainly climaxes in the Vice tent. Guitars scream like alarms over prowling bass. The marriage of the two is reminiscent of Jesus Lizard and Black Flag. If the bass riffs of Black Flag’s ‘Six Pack’ were force-fed colossal amounts of krokodil and left to synchronise with the chaotic sirens of the descending emergency services that is. We even forget that we’re human beings during ‘Clubfoot by Kasabian’ – Blacklisters’ definitive two-finger salute to the mainstream. Every member of the crowd just becomes a prop for Billy as he invades the audience at his whim, writhing and thrusting atop a bed of stylishly tattooed forearms.

‘The idea is to force you to like it or not like it. I like that about our songs. There’s no hiding behind anything, forcing your hand.’

It’s hard to liken Blacklisters to any other band without comparing them to their peers in Leeds (Hawk Eyes, Castrovalva etc), many of whom are present in the Vice tent. The ‘Leeds lot’ are out in force. Shrugging off such geographically-ordered pigeon-holing, Blacklisters tell us ‘we’re essentially a blues band. We either listen to heavy visceral music… or we listen to Jonny cash, Toots and the Maytals and Fleetwood mac’ (Fleetwood mac starts playing far somewhere far off in the background, and it suddenly becomes apparent that Blacklisters are not only a band, they are a cosmic force).

Blacklisters finish their on-stage rampage with ‘Trick Fuck’, the latest single from their recent album BLKLSTRS, a song ‘about stupid but incredibly handsome men’ that plays to the dark image Blacklisters have forged for themselves. ‘People have a perception of us, and blatantly they’re going to want to make it homoerotic. erm. puking black goo and err. fellating bananas. Of course that’s what they want. And to be fair, I’m cool with that.’ So naturally, that’s exactly what appears in director Matt Green’s video for ‘Trick Fuck’.

‘Somebody who trickfucks you, you think you’re doing one thing but really you’re getting fucked over. Someone that we’d describe as a ‘trick fuck’ would have this brilliant veneer of looking excellent when really they’re fucking morons who put men in headlocks.’

We get the ominous feeling of being the victims of a trickfuck ourselves. We set out quite innocently to enjoy a set by a notoriously macabre Leeds hardcore band, and left with jaw ache (from being utterly compelled to grit our teeth throughout the set), ear ache and a hideous emptiness within that can only be sated with MORE Blacklisters. They assure us that they’re working on a new album.

‘We’ll get it finished by the end of this year and out half-way through the next.’

If like us you can’t wait that long, then take note that the leviathan force of Blacklisters will be surfacing on 23rd October at the Brudenell Social Club in Leeds.