We spoke to anthemic pop-punkers Blitz Kids about their new noise, their plans to upstage Young Guns and err, unleashing the farts. 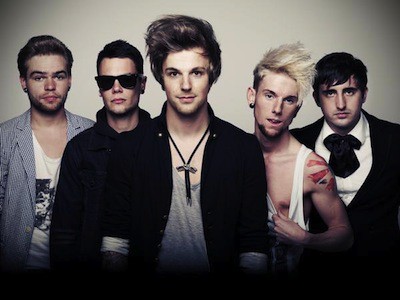 S] Hi, Hello! Could you introduce yourselves for us please?

Joe] “Well, not all of them. Most of the time I get most of them. I don’t usually get them all right though.”

S] How are you enjoying Slam Dunk so far?

Jono] “It’s been good, loads of interviews and we’ve already seen a load of friends that we haven’t seen in a long time, looking forward to catching up with them, getting some beers in, watching some bands and having a sick time!”

S] Are there any bands you’re really looking forward to today?

Joe] “We were looking forward to seeing Sleeping With Sirens, but we clash with them. We share the exact same slot.”

Jono] “But we went to see them the other night though, so it’s all okay!”

Joe] “Pierce The Veil, Memphis May Fire…anyone we can when we’re not onstage really.”

S] You’ve got dates with Young Guns in the future? Nervous/Excited?

Jono] “We have! In Ireland! The green Isle! Very excited and not nervous in any way, shape or form! We’ve only just played those venues with Lower than Atlantis, so we know them like the backs of our hands now. We’re gonna dominate! We’ll show up Young Guns at their own game.”

S] Looking back at the mini album, ‘Never Die’ how does the new material compare sonically?

S] You’ve had support slots with bands like We The Kings, Lower Than Atlantis and now you’ve got festivals coming up. That’s a pretty full dance card. Does that mean that playing live is more important to you than recording?

Jono] “We started writing and demoing for this album two years ago and we’ve been sitting on it for so long. It’s kind of like holding in a fart. It’s just been building and building and when you let it out, it’s so loud and it smells so good. We’re gonna tour everywhere. We’re just gonna waft that fart far and wide.”

S] What are your main influences at this stage?

Jono] “I think, I may concur with that. We’ve been taking in influences left, right and centre. It’s been a bit of a mish-mash.”

S] Will the new album reflect that? Will it be diverse or will there be a more cohesive sound?

Joe] “We’ve found our sound on this this album. ‘Never Die’ was us looking for our sound and this one is us, we’ve found it.”

S] Would you say that ‘On My Own’ was representative of the sound of the new record?

Joe] “The whole record is very diverse; it goes from very heavy to very light, very poppy, very dance-y. There are ballads on there, there are anthems. We wanted to release ‘On My Own’ first because we think everyone expected us to come back from America sounding really poppy, but we wanted to show that we hadn’t changed.”