We catch up with Liam Cormier, vocalist of Cancer Bats ahead of their April marathon run of dates in London to talk about the ideas present on new record, ‘Dead Set On Living’ and at the same time, we get some insight into Liam’s connection with fans, thoughts on performing covers as Bat Sabbath and attitude to touring. 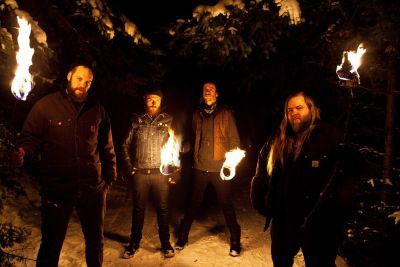 S] You guys are known for your unique punk sound, combining hardcore, heavy metal and southern rock, what made you decide on merging such genres?

L] “We’re all just fans of so many different styles that we can’t help but want to change it up. Not having any restrictions has always made it really fun for us.”

S]  With your unique sound in mind, what or who do you consider to be your main musical influences?

L] “When we first started the band, Scott [Middleton, guitar] and I were really influenced by other bands that were really changing things up and doing something different. Bands like These Arms Are Snakes, Harkonen, ETID, Mi Amore, Death From Above, Cursed were all doing these amazing new things and we really wanted to start something up that was pushing those ideas as well, but also trying to do something that we didn’t really hear being done.”

S] Cancer Bats are also known for your quirky and rather strange song and album titles, such as ‘Pneumonia Hawk’ and the unusual ‘Bears, Mayors, Scraps & Bones’. How do you come up with such individual titles? Is there a certain way in which you chose titles or do they just come to you out of the blue?

L] “We all love having a good time and not taking things too seriously. One of those things is having funny song titles when we’re working on songs; lots of times those joke song titles end up just sticking because they either fit the song or they’re too funny to let go. Harem of Scorpions, Zed’s Dead, Golden Tanks are all stupid inside jokes that just ended up lasting because they sound so cool in the end. [laughs]“

S]  The new album is called ‘Dead Set On Living’, what can fans expect to hear on this latest offering?

L] “I think any fan of the band will be super-stoked on this new album. We really wanted to make sure with this record that we didn’t stray to far from what we started out doing, which was making ‘banging party songs’ that we wanted to ‘rage’ to. In the end we’re so amazed that people have been so supportive of us over the years that we really didn’t want to betray that and progress too far from where we’ve come. I more just wanted to try and out do everything we’ve ever done and write the best CB record ever.”

S] Your first release off this new album is ‘Old Blood’, was there any particular reason or significance why this song was chosen?

L] “That song has been a band favourite since we first finished it. We would start every jam by playing it and finish every jam with it. Since we weren’t sick of it after playing it that many times we figured there had to be something good there.”

S] On previous albums you’ve collaborated with bands such as Alexisonfire. Are there any guests on your new album? Or is there anyone you want to work with in the future?

L] “We have some rad guests on the album this time around. Rob Urbinati from Toronto thrash metal kings Sacrifice sings on the song ‘Rats’ and our good friends Dez from Devil Driver and Kate from An Horse sing on the song ‘Bastards’!

S] You grabbed more of the rock limelight when you covered the Beastie Boys track ‘Sabotage’. Are there any more covers in the pipeline? Or are there any songs that you would love to put your own spin on?

L] “We’ve been crashing the covers scene lately with our Bat Sabbath sets. We even did a whole tour of it in Canada! Covers are fun and it rules playing the songs that you love with other people wasted in a bar who love them too.”

S] Your upcoming tour takes you from the States to the UK and then on to Europe, what are your favourite aspects of performing live?

L] “I like that every night is different and exciting in its own way. I feel like that’s the best part about doing this and why it’s all still so fresh.”

S] Liam, your vocals are powerful and gritty and many people admire your stamina when you perform. How do you prepare for a live show? Do you do any vocal exercises, any scales and arpeggios?

L] “I’ve never been classically trained in any way. I do stretches and I hum a bit before shows. The biggest trick is lots of sleep and lots of water.”

S] What made you decide on the epic task of blessing UK fans with six shows in one day?

L] “For us there’s no better place to see a hardcore show than in a small packed club where everyone’s sweating and having a good time. No barricades or anything like that just everyone partying together. But when you only have one day to do it and lots of rad kids you want to party with, you have to fit in a couple more shows.”

S] You guys have a really close connection with fans, making vlogs and touring many small venues. Do you feel it is important to create a good relationship with fans? And how does it feel knowing you have such a loyal fanbase?

L] “Our fans are the best and it has always been important to me to be a part of that. In the end that’s what separates the hardcore community from so many others is that we are all in it together and that the whole thing is more about a hang out and good time than just standing in the audience or sitting in a chair for a whole show. I feel very lucky to have been accepted in to so many tight scenes all over the world and I can’t wait to party with all of them on this next bunch of tours.”