In our time at Slam Dunk Festival in Leeds on May 24 we got the chance to sit down and talk to Luke Prebble and Mike Sparks of Hampshire band, Canterbury. We talk to the guys about some of their influences, experiences on tour and their most recent album, ‘Dark Days’. 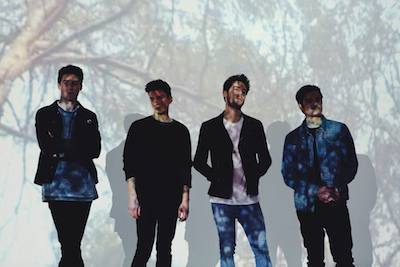 S] Hey guys! How’s the day at Slam Dunk been going so far?

L] “It’s been good, abnormally short for a festival experience. We’re on pretty early so we got here way before doors even thought about being open. The uni chairs and tables were still being cleared out from the main stage room where we’re playing and breakfast had just been served.”

S] Have you been touring for a while now?

L] “We released our third album, ‘Dark Days’ at the start of this year, played a few shows around the release of that and then played a full headline tour that ended last month. So for the last few weeks we haven’t been doing that much and then Slam Dunk’s kind of kicking off a nice busy summer for us, although it doesn’t feel like summer right now.”

M] “It’s the doors of summer because in classic British fashion, it’s just pissing it down.”

S] Have you got a very busy festival season planned?

M] “Busier than it’s been before, we’ve got some little ones with these festivals popping up all over the place now. But we’ve got some real good festivals like Two Thousand Trees, which we’ve never been to, but it’s won all these awards; ‘best little festival, best this and that’.”

L] “And I’m excited to see all these trees. It’s a wonder people can see the stage.”

M] “But we’ve got things like that and then we’re actually doing Sonisphere as well which is a nice bigger one for us. We’ve got some cool stuff coming up this summer.”

S] What influences your writing style and the writing process?

M] “I imagine a majority of song writers would say that the influence can come from a feeling you get or a place that you’re in or memories and places, people you meet. And then, only then comes the music. Inspiration from how you’re feeling, how you then turn that into a song maybe doesn’t come from music, it comes from life. A lot of what influences us is the life of our band and as friends together, experiencing the same things and having the fun that we’re having but also having the turmoil that comes from being in a band and the desire to achieve success and maybe not an easy road to it. I feel like that’s kind of an influence for us because there are three song writers in the band. That mixed with just personal life experiences and then some deep stuff from us. I think at the same time it’s not too ‘that only applies to that guy that’s singing’, we try to apply the sense that people can relate to it. As one grows up and gets a bit older you no longer have to write stories. You can actually write your own life. Maybe a slightly ‘artistic license’ version of it.”

S] If you could perform with any one musician or band from history, who would it be?

L] “For me, personally, it would just have to be The Beatles. It’s the corniest answer in the world, but I would just want to sit down with them after the show and be like ‘who wrote that? Who wrote this one?’”

M] “I can imagine being in six part harmony with The Eagles, plus they’re all still alive so it’s not out of the realms of possibility. I mean it is pretty impossible, but it could happen. It would also be pretty cool to share the stage with Bob Marley, not in terms of musical relevance, but as an inspirational human being.”

L] “Fleetwood Mac. That would be great. We emailed our agent and we found out that Fleetwood Mac were touring and we said ‘if you could do anything for us, just get us on that tour’. We’re still waiting on the call back. The tour’s happened already, but I’m still hoping.”

S] What are some of the best and worst experiences you’ve had on tour?

M] “The best experience on tour this time around would probably be the London show we played. It was the biggest headline show we played and that’s our ‘hometown’, one of us only lives there, but we come from the South of London. It was out of this world though, it was exactly what you dream of happening, it was a dream come true. It was like five hundred people singing back three albums worth of material and you can ride that wave for an awful long time.”

M] “It ran almost too smoothly. We’re still waiting for something to happen even though it’s been done a month.”

L] “In Bristol we played eight shows in a row and my voice really hurt and I think the crowd could hear it.”

M] “There are a huge amount of downsides to touring. If you can call it a job, it is the best job in the world. That’s if you love waking up somewhere different every day and you love getting to play an hour and fifteen minutes of music in front of people that like your music every day. There aren’t many more boxes you want to tick in terms of satisfaction. But then you start missing people and those are the downsides to touring and then you miss your friends and family. But if you’re doing something that you love and you’re missing people, it’s a nice emotion. That’s a good thing to miss somebody, I always feel. That didn’t really apply, because we were only away for about ten days. That’s really what I’m getting at, we weren’t touring long enough for there to be downsides.”

S] What are your plans for after summer?

L] “I don’t know. We’re in the middle of processing what to do really. We’re going to release a couple of singles maybe from the record. We’re just kind of riding with it. We weren’t really sure how this album was going to go in terms of it being the third album and we’re still relatively doing it off our own back. We’re all up for whatever’s going to happen. We really want to get over to Europe and go to a few places we’ve never been before. We definitely don’t want to leave it to long before we get back on the road and play some more shows. If we can keep putting music out there then we’re happy.”