The ultimate pure rock four-piece from Germantown, Maryland release their next epic ‘Earth Rocker’ in March, so bassist Dan Maines and our editor Dom Smith had a chat over the phone to talk about that, dealing with nostalgia, how the band has progressed and what the best songs to be introduced to the Clutch experience (for a first-timer might be… 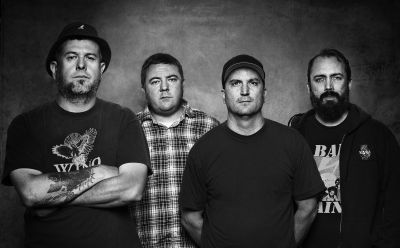 “We’re really excited about the new record, people should expect to hear a very upbeat collection of songs. It’s a straight-ahead rock album.” Dan is of course talking about his band’s new offering, ‘Earth Rocker’. This is the band’s first studio album since 2009 and it’s making an entrance onto the scene as storming as the music it carries.

The conversation continues towards the subject of the record’s cover art and then in turn to its production. Friend of the band Nick Lakiotes, who has been involved in the creation of artwork on past albums, worked on the image with the band and Dan believes the result has a real iconic feel. “A lot of the concepts originated from Neil [Fallon, singer] which is great because Nick and him see eye-to-eye.” The bassist says that they managed to end up with a good representation of the band themselves in the cover art.

To carry on the theme of working with people who have helped them rise to success, the record’s production work was done with Machine [Crossfaith, Chiodos]. The comfortable environment that the band find when working with them lets them know what to expect, not to mention that the guy seriously knows what he’s doing and the confidence they have in him means he’s easily the “best guy to tackle the songs”.

Since, in the industry, there has been much talk that this record, ‘Earth Rocker’, is their best yet (of course…) – we ask Dan if Clutch would consider playing all the songs out live? “As far as enthusiasm goes, we’re very anxious to play the songs from this record. As albums get older your affinity for them starts to fade away a bit. We write set-lists, agree on songs and some don’t make the list. But this album, being so fresh in its nature, we are all very excited about every song and hope these feelings stay.”

With regards to playing the album live in its entirety, Dan explains why it’s not something they’d choose to do: “We did that a few years ago, playing the self-titled album ‘Clutch’ for a DVD. It’s a fun experience but not something we’d take on tour because, to be honest, when you have a set that you’re gonna be playing for the next twelve songs and the audience knows too, it takes away a certain aspect of surprise for the band as well as the audience. It’s just not how we do our shows, we need spontaneity.”

Next, we cover the best songs from the new record; our Dom chooses a couple of his favourite tracks for Dan to talk about.

On the track ‘Earth Rocker’, Dan comments: “It went through some pretty extensive metamorphoses between the first time we played it, (six months ago), and when we went into studio to record it. Playing it live, we just naturally began to play it faster and faster. That song and the last one of the album really set the tone for the whole thing. ‘Earth Rocker’ is a real fun song to play.”

On the track ‘Cyborg Betty’ (incidentally, Dom’s favourite – he references Thin Lizzy and Motorhead as clear influences when asking about it…) Dan comments: “Well, you nailed it bringing up bands like Thin Lizzy and Motorhead. TL influenced it consciously; that style crept its way into the songwriting process. It started with the main riff [in the song] and we’d typically say, ‘we need a riff to go over that one’ but instead we put some chords down instead which is a very TL approach. The vocals on that track are insane!”

So, Clutch have been together and making brilliant crunching rock music for 25 years in 2015 and their first album ‘Transnational Speedway League’ is 20-years-old this year so the talk of potential anniversary celebrations briefly takes precedence over other topics. Unfortunately, Clutch aren’t a nostalgic band and haven’t put much thought into celebrating their milestones but will probably reintroduce a few tracks from their inaugural album into their set-list. Dom inquires as to how the band has progressed through their many years together.

“We have all grown as musicians. There is a level of confidence that our music displays now because of the years we’ve spent together. We have been playing together so long it’s like second nature. The four of us know more or less how the other person is going to…well, it’s not something you have to think about, it’s easy to us. We haven’t set any musical goals or guidelines as to what music we’re gonna write. We let it take its own course. This record does a nice job of putting all our previous elements into the one package.”

A brief chat is had on the subject of Clutch’s side-project The Bakerhouse Project and Dan reveals that while the original group have something on, TBP must unfortunately take a back seat but they have been known to combine a show of the two acts together – definitely something to witness! That could happen this year in fact.

Finally, Dan is prompted to choose a few tracks with which he would musically initiate any hypothetical band members.

Thank you to Dan for the interview and to the whole band for another thumping record.