We’re really proud to unleash this interview with Code Orange into the world. Guitarist Reba Meyers talks us through the inspirations and ideas behind new record, ‘Forever’. 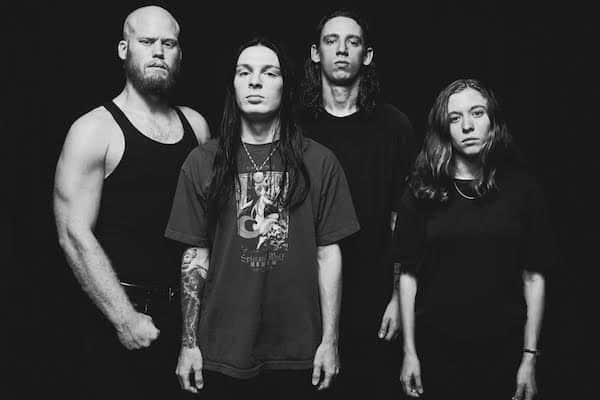 What is your mission statement with ‘Forever’?

With Forever, we want to show what Code Orange is really capable of. We made the darkest, most painful record that really reaches to all corners of our band’s essence and inspiration.  Each song fits into a full puzzle with the overarching statement that Code Orange is forever; we are new and fresh and passionate about what we create, and we are here to stay.

What keeps you passionate outside of music… think people, places and even movies, for example?

Honestly, musicians of all kinds will always be my main inspiration for passion, and that topic is so broad that it’s plenty for me to delve into without having to go look for others elsewhere. I’ve been immersed in all kinds of music my whole life and bands, artists, producers, recording engineers, movie soundtrack composers, and all kinds of people involved behind the scenes are all huge inspirations to my work.

When I have free time to read magazines with awesome interviews like tape-op and listen to podcasts or watch shows like Pensado’s Place about music and recording music, and people who devote their entire lives to being creative in all places in the music industry, I take full advantage to really try and listen and learn from them. Music is where my passion is, and it is a cycle that feeds itself. I want to know all I can about music, and yes of course I watch movies and try to travel and see new sites if I can between tours to give my mind rest, but I’d always rather be immersed in music. Code Orange itself, and my bandmates alone are plenty inspiration to me as it is! They each bring so so much of themselves to this that I will always aspire to match. Them and all of this never burns me out.

What are some plans for 2017 that you can tell us about?

Tour tour tour tour tour! Just as we did after our last album, I Am King came out, we are going to push ourselves as far as we can, and do all kinds of different tours and put our absolute best selves and best performances to thinners and potential new thinners out there. We’re hopefully going to go everywhere! We have more US plans and Europe plans as of now that we’ll announce soon, and more to come as the year goes on as soon as this record is out.

What would you say the biggest challenges for the band are, as we approach 2017?

Touring for months can get tiring, and we just have to make sure we meet that challenge, and put our 100 per cent best foot forward as a band, every single night and every single single show no matter the circumstance!  And when off tour, the challenge is always to prepare ourselves to the best of our abilities, and push each other. Every single person in this band has their mind and body completely devoted to this, and we will always being to meet challenges when we are given them.

The video for ‘Kill The Creator’ was really cool – what were the inspirations and ideas behind that one?

Thank you! For that video, we went a different route than we usually do but I think it turned out very different and cool as you said!  The original idea was to create more of a visual to move and go along with the song, rather than a video to really draw the attention and create a story. Our other guitar player Eric has been inspired a lot recently by 3D motion graphics, and he came across Brandon Allen Bolmer who creates dark and fucked-up 3D motion art, and we all thought he’d be an interesting fit. We were actually all a little nervous about trying something so new and different like that, and people definitely seemed to have different types of reactions about it, but we were all very satisfied. We wanted to create a torturing, deranged landscape that felt as explosive, fast-paced, and heavy as the music does, and I think that exact visual was successfully created.

Is there a track from the new record that people won’t have heard yet that you feel will challenge people’s perceptions of what the band is about?

It’s hard for me to pick a track as I really believe they each have their own unique character and characters that will challenge people’s perceptions of us.  We don’t make any filler and every single song has its own vital purpose on ‘Forever’.  As far as maybe the most unexpected, I’d say the last two songs on the record.

Unlike some records I hear, we absolutely did not give up at the end, but instead put maybe the most different tracks for us here to show listeners how far we can go within the Code Orange spectrum. Hurt Goes On and dream2 are much more exposing songs that focus on specific strengths that we touch on earlier in the record, but that don’t come completely full circle until the end. They’re arguably the darkest two tracks that each have an individual way of putting that across that we haven’t done in full form in the past. I am very ready for people to hear it all.

How do you look back on the success, and the time of ‘I Am King’ now?

I look back on it positively, but also I try to just focus on pushing forward. I love I Am King, and I feel it was successful for that mindset we were in at the time, but Forever is now, and Forever is the future of Code Orange and it will bring us so much further than we ever have been. I am very grateful for the opportunities we got when we put that record out, and I am proud that I Am King is a piece of the foundation for what we have created now. But now, with that backbone we grew, solidified, and expanded on during I Am King, we are taking it to the next level with Forever.