The term “up and coming” gets slapped on far too many emerging bands with the slightest hope of a record sale but for Graham Dickson, and his band of merry Crystal Fighters it’s all too fitting. They’re kind of taking over the universe…with good vibes. 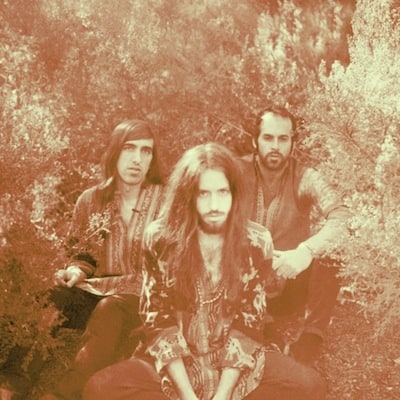 “We all find inspiration from the natural world” – Graham Dickson

Despite having graced dance and indie tents everywhere with only two albums so far, the impact this sound has had is astonishing, like a force of nature themselves, they’ve whipped up the global community they call home into a crazed culturally rich dance frenzy that grows day by day. Now, with the concentration of soul and feel good energy the band calls ‘Cave Rave’ out on the market, we got the chance to delve into their lives and litanies to discover what makes these sway masters tick.

Properly uncategorisable in their unique blend of global compilation, we are interested to find out, what influences the band’s genre-ambiguous sound. “I love nature,” says guitarist Graham Dickson, “I love moving really fast, through nature and I think we all kind of find inspiration from the natural world.”

When your music and your lifestyle are fundamentally tied together, stemming from the same passionate core, it’s inevitable that influences are going to seep out from one to the other. As he says, his music has allowed him to “assess myself as a citizen of the world” and from that Crystal Fighters have been able to “meet local musicians”, gain influence and inspiration as they go. Their music has allowed them to “kind of be welcome…in a way we wouldn’t necessarily be welcome” (unless they were playing) on a personal level by all types of people, and that “inside view on cultures” has afforded Dickson the chance to “take a step back from himself” to gain new objectives and progress in his own direction.

In a universe where darkness can often impede on everything (how depressing…), we wanted to know what ray of sunshine has kept this band inspired to spread their message of positivity and keep it up beat no matter what. We are told that the band are “just really, really happy to be able to play music”, so much that “the biggest challenges are so minor in the scheme of things”. The people’s reaction keeps Graham going as he feels, “we are appreciating the positivity of the music” and for him the greatest challenge to come is to “make sure we don’t become stagnant”, and make sure they’re constantly evolving”.

After running out to the world, shiny new record in hand, it was clear that a cast off from shore into the churning sea of cultural diversity had accumulated a whole host of divergent and beguiling concepts within the band’s minds and ideology while round the globe. We are eager to uncover was how Dickson looked back on when the band’s debut album (‘Star Of Love’) was released in 2010. “I love the first album,” he begins, “I think there’s a rawness to it that the second album doesn’t have and we still play them (first album songs) pretty similar to how we played them initially, just for that “throw back, nostalgic feeling”.

With such a blinding tune as ‘Wave’ to open an album, our instrumental intuition told us there must be a reason for such a pumping opening. Graham shares with us that the plan was to “start in a more mellow way, but with a pretty important message”. The band wanted to “set the foundation” for the album. “We are all just riding the wave of life, you know?” Later song ‘You & I’, meanwhile is about “being in the moment and being in love in the moment and nothing else exists at all”.

When you listen to Crystal Fighters, no immediate genre springs to mind and perhaps that is what allowed them to capture the public and be placed up high with a reverence of diversity. Knowing that Justin Meldal-Johnsen from Nine Inch Nails had worked with the band as a producer on the record, we were curious about how he found trying to work with such a notoriously ambiguous act as Crystal Fighters. “He took it on as a challenge,” explains Dickson, they began talking over Skype during the pre-production and because, as Graham says “Justin is experienced playing music and producing other great bands, and also working on electronic music,” he says, “It seemed like once we got there and began working together it all started to make sense.”

Crystal fighters are looking at making a return in 2014 with more festivals, bigger and better performances, and maybe even a new album on the cards. ‘Cave Rave’ is a wonderfully rich melting pot of collaboration, where each culture had an ingredient or two to share. It definitely shouldn’t be missed and any opportunity to see these masters of the dance groove live, would be an added bonus.