We had the opportunity to hang out with Cypher16 at this year’s Bloodstock Festival. Baking in the sun on the greenest patch of grass we could find, we talked to guitarist and vocalist Jack Doolan and guitarist Will Cass about the challenges of being a young ambitious band, the new EP, and their plans for the rest of the year. 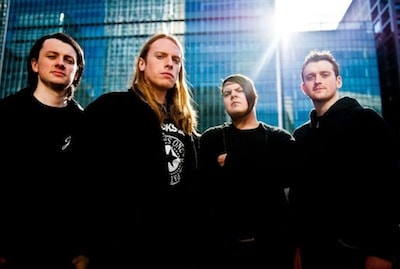 J] “Yeah, absolutely. It’s our first time. Just came from Gojira which was as usual a masterclass, so that was fun.”

S) Any band you’re looking forward to in particular?

J] “Obviously Lamb Of God, Slayer, Anthrax, Exodus. And Devildriver will be good!”

S) Bit of a serious question, but you guys played on the Sophie Lancaster stage yesterday. How do you feel about the themes surrounding that?

S] Bloodstock is an incredible metal festival. What makes metal a strong force for you?

J] “Fundamentally metal is a very primal kind of music. With Gojira, you can’t beat the sound of a low tuned distorted electric guitar, there’s something visceral about it.  I like what you say about the primal aspect of it. I think what it is, it’s about rhythm, and bands like Gojira do so well because they have low tuned guitars, and the lower tuned the guitar the more it sounds like a percussive instrument. And Gojira do so well because it’s less about technicality and more about the groove, so they’re basically a heavy rhythm band.”

S] They have simple melodies as well, that’s the other thing.

J] “I don’t think it’s about the metal aspect, it’s about playing heavy music. That’s what I’m really into anyway.”

S] You were very young when the band begun. What challenges did that bring?

J] “I was about fifteen when I came up with the idea for it, and we didn’t start touring until about 2008 and we did our first international tour in 2009 when we were nineteen. This offer had come out of the blue to play a festival with Mudvayne. We lost an awful lot of money but we got to go on tour in the US and play with Mudvayne. I remember there were ten of us in a camper van, and it was just such a ridiculous thing to be doing, but we were doing it.”

S] Sounds really fun! You get to visit a lot of interesting places.

J] “Yeah, we’ve obviously been to a lot of places around the world, which is amazing.”

S] You’ve created your own distinct style with Cypher16. Where does the influence come from and how do you feed that into the writing process?

J] “I love how we’re talking about Gojira every other sentence, but if you listen to older Gojira albums you can see that their main influence is Morbid Angel, to the point where people would accuse them of ripping them off massively, some of their death metal stuff is frankly identical to a lot of Morbid Angel stuff, but they were obviously really into that sort of thing and they made it into their own style, and now Gojira are the ones with the new amazing style. And they’re still learning as well. So you start off copying your favourite bands and then as you get older you make those influences something new – which is you.”

S] The new EP ‘Determine’ came out this year. What were you aiming for going in?

J] “We knew more about how to write a good song and keep it catchy this time around. We progressed on from the last EP.”

W] “There’s definitely an identity with the two EPs. With ‘Metaphorical’ and ‘Determined’, there’s maturity from one EP to the next, and the songs really hit home, it’s right from the word go there’s no beating about the bush at all. But the sound and the layout, there’s a lot of similarity between the two.”

S] Any advice you would give to new bands?

J] “When you write your first few songs or think you’ve got something good, record it properly, spend the money, make a good product. If you write a great song but don’t record it properly, people dismiss it instantly. People expect a certain standard, even from new bands, and if the production’s not right, or the cover doesn’t look good, you’ll give it to people and they’ll instantly dismiss you before they’ve even given it a chance. So take your time, spend the money and get it right the first time, because you’ll only have to go in and redo it. Once you’ve got a good product, then you can start sending it out and there’s always people who will like it.”

S] Certainly. And there’s always time to do that, everyone, not only in music but any ambition, seems to act like it has to happen today or not at all, when really there’s so much time.

J] “Yeah, there is man, definitely. You look back and think well actually that extra six months was a good idea. Because once it’s out we can’t take it back.”

S] What are your plans for the rest of the year and onwards?

W] “We’ve got a short run with Sacred Mother Tongue.”

J] “Also, We’re gonna do at least one show with Dead By April, and then we’re just confirming festivals for next year. Then we’re gonna start tracking the album finally because we think we’re finally ready to do it, hopefully before the end of this year. And if we can squeeze it in we’ll go to India again, ‘cos that’s always a lot of fun, and we’ve done it five times now.”