In our latest interview, we chat to Nightmare from Deathstars about the band’s forthcoming album, ‘The Perfect Cult’ (out on June 16). 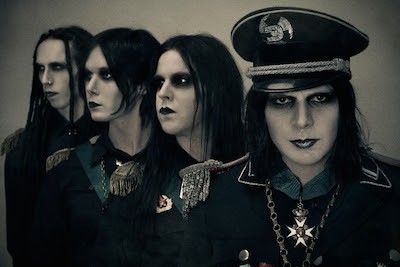 S] Talk to us about the inspirations and ideas behind ‘The Perfect Cult’.

N] “The title comes from the track with the same name which kind of sums up a little bit about an underlying theme which is present more or less to some extent in all of the songs even though they all have different stories and angles. It’s a theme of desperation to find meaning in things and in the end you end up believing in nothing. How believing in nothing turns to worshipping nothingness and how that turns into self-destructiveness because you grow emotionally numb. So it is actually a sarcastic title because it is everything but perfect.It’s an album that was very important for us to make as a band, we needed to take a step in our own direction without anyone telling us what to do. We needed to go with that feeling that we have inside that drives us to write music and also we needed to re-connect with the reasons to why we write music.”

S] What keeps you guys passionate about creating, outside of music at this stage in your careers – think people and places for example?

N] “I guess you can divide it into stages. In the writing process it’s usually a spark of inspiration that comes flying or you decide to sit down and work on something random until new ideas pop up. I mean, if you don’t feel inspired you have to have really strong discipline to keep you going on. In the programming and production process you have to have rock hard discipline and nothing else. Especially since I’m the producer doing all the hours of endless tweaking to perfection. At the end of the day it’s also a bit ‘Dr. Jekyll And Mr. Hyde’ to switch between the two stages and reboot your brain to start over as if you’ve never heard the songs before. So to sum it up: In the creative and writing process I usually take inspiration from experiences in life that ignites that spark in my mind, but in the production process it’s just plain stubbornness that get’s me through it.”

S] How do you look back on the success of ‘Night Electric Night’ now?

N] “Well, it is and was a good album. Because it was stressed on by management, I have no deep connection with it which makes it strange for me. It feels unfinished and a lot of it feels a bit forced. I prefer to have a strong connection to the music I make because i want it to mean something and not just be fast-food for the ears. Rather a slow cooked meal for the soul.”

S] Talk to us about what inspired the video and concept for the song, ‘All The Devil’s Toys’?

N] “’All the Devil’s Toys’ is a pretty straight forward song about enjoying the pleasures of flesh and living life without morals. About teasing the listener to a place where there are no laws, where innocence doesn’t exist and where it’s fu**ing cool to be. The darkest playground, kind of. Visually it paints a picture of acid rain, bloody money, oil on cracked highways, the devil’s toys – symbolic for morally questionable things to do – charlatans and libertines that run among burning dollhouses and people drowning in mercury. The video is the directors – Ivan Colic from iCode – interpretation of the lyrics and description of the song. We really liked the ideas he presented and decided to go with his lead and it turned out great.”

S] Is there another track from the new record that you feel like defines where you are at as a band right now, both sonically and as artists?

N] “They all do in some way or another, they are all good reflections of where we are as a band right now. We have always had a wide spectrum from heavy or even slow songs to faster songs and on every album we want to include a little bit of everything to give a complete picture of what we are doing.”

S] How are you looking forward to visiting the UK again and performing some of these tracks?

N] “We are coming back to the UK in November and we are all really looking forward to it. We’ve got six shows planned and we will bring the best show we’ve ever had. Don’t miss it!”