We caught up with DSHS’s drummer Leks Wood and their retiring vocalist Ed Gibbs at Slam Dunk where we talked about all sorts of things including, goodbyes, our favourite screamers and inevitably, physical releases versus downloads. 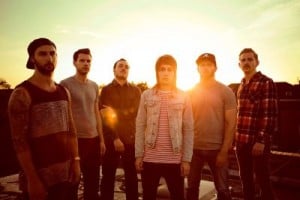 S] Ed, You’re leaving the band after Slam Dunk! How do you feel about it?

E] “It’s been quite sad really, usually festival days are a lot of pi**ing around, but now it’s just tinged with sadness. I’m gonna have a great time and it’s all very positive, that’s just how it is.”

S] Have you managed to spend any time as a band with the new vocalist, Paul Green?

L] “We did some dates with him in France and Germany as kind of a road test. He hadn’t really sung live for the better part of two years, so it was just to see how his voice would cope night after night. He did brilliantly, obviously. It’ll be interesting to see what he comes up with when we get to the writing stage.”

S] Do you anticipate a change in the dynamic of the band?

L] “It will change to a degree, but not so much that people won’t recognise us as DSHS. That was one of the important things that we talked about when we recruited him. Especially with our back-catalogue. I don’t think our sound will change completely.”

S] Who are your influences? You make heavy, metallic noise that’s reminiscent of the classic Trustkill Records bands like Hopesfall or Poison The Well.

E] “Yeah, we’re all big fans of Poison The Well. They’re one of my favourite bands. Their vocalist, [Jeffrey Moreira] has one of the best screams on the planet.”

L] “It’s one of the ballsiest screams ever it’s like: ‘everything else can fu** off!'”

E] “In terms of influences though, I don’t think we’ve pulled in any new influences since we started. We started with bands like Deftones, Will Haven, then over the past nine years we’ve changed quite a lot. I know it sounds lame, but I think now we just sound like ourselves.”

S] How do you intend to move forward following your last album, ‘Empire Of Light’?

L] “We had a rough plan of releasing three sets of two songs, and having an artwork concept that ties the three singles together and then maybe releasing all of those songs, plus a few extras as an album next year. It’s important to have nice artwork on nice quality materials, because that then works as another incentive for people to go out and buy the physical product. Especially when vinyl’s involved. Another thing we’re looking at is getting ‘Empire Of Light’ released on vinyl.”

E] “Sound-wise though, I know we’ve never set out with a particular sound in mind, we’ve just written songs and they turn out how they turn out. It’s not worth thinking about it too hard because then it doesn’t sound as natural as it could.”

E] “It’s always about the music first and foremost and less about ‘product’.”

L] “There is the argument that you’ve spent so much time perfecting this piece of music that you want to package it properly, but that’s very much an afterthought. The approach is more: write songs you’re happy with, get them to the point where you want to get them in as many people’s ears as possible, then find the medium to do that.”

E] “We’ve always taken care with the packaging of our albums, we’ve always felt that it works together and matches up, with some bands it’s all image and no content. There’s nothing wrong with packaging your album in an absolutely beautiful way, I’ll never complain about that. It’s just gotta be a good album as well!”

L] “There’s a festival in Germany, called With Full Force, which is hopefully a main stage billing, which will be incredible for us. We’ve got Summer Jam confirmed, then maybe this series of three singles.”

E] “I think it’s a shrewd way of doing it, because music is wasted on albums these days. People just don’t have the attention span. In some ways it’s so sad to put so much time, effort and love into a collection of ten songs and fifty minutes of music and then people go and download the album and… you look at stats on things like Last.fm and it doesn’t matter who the band is, after a certain amount of songs the number of plays just drops off because people just don’t have the time.”

E] “I just think people in general don’t have the attention span to get through a whole album these days, so I guess it’s quite shrewd to release it in bite-sized chunks, like: ‘you can make it through two songs! You can do it!’”

L] “…Then when the album comes out, you recognise those two songs.”

S] How are you going to spend the rest of your time here at Slam Dunk?

L] “I wanted to see Deaf Havana, but our sets overlap.”