Here, we chat to Rob Damiani of Don Broco about the band’s forthcoming album, ‘Priorities’ alongside the band’s various inspirations for the new material, and thoughts on playing shows up North. 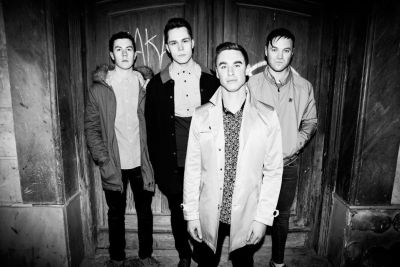 S] Where did the ideas form for the brand new ‘Priorities’ video – it looks like a load of fun!?

R] “It was! Well we wanted to get across the general meaning of the song about a dude ditching his mates for a girl, but without making it too literal cause that would have been boring. Initially, we thought a Tarantino or Guy Ritchie feel to it would be cool, and from that had the idea of making it into a robbery where ‘the mate’ lets us down due to being too him being too interested in his ‘bird’. In the vid he gets double-crossed though, and we leave with the loot, so Broco win!”

S] How does ‘Priorities’ the album push forward and expand on what you did with ‘Big Fat Smile’, sonically?

R] “We got to do some pre-production this time around so had the chance to experiment with different instruments in the studio. Thanks to this we’ve achieved a much more varied sounding bunch of songs. While some tunes are big riffers, there’s a couple of tracks that really chill things out, and some that are more acoustically driven. It also just generally sounds bigger. If you liked ‘Big Fat Smile’ you’ll love ‘Priorities’.”

S] What about thematically – what is driving you forward on the new album?

R] “Lyrics-wise, I write about experiences me and my friends have had, whether it’s through telling stories or a commentary on a particular situation. We decided to call the album ‘Priorities’ because the songs are mostly about all the varied and tricky choices you have to make in life, what you prioritise as important.”

S] How do you look back on tracks like ‘Dreamboy’ from that record, now?

R] “We’re still a big fan of that tune and it’s a lot of fun to play live. That song is pretty much straight up rock and pop while still sounding like Don Broco and song writing wise it was a huge step forward for us at the time. The new songs on ‘Priorities’ are so much better though!”

S] Is there a song, aside from the new single, that you feel best defines the state of Don Broco as a band, right now?

R] “From songs that people have heard I’d say ‘Metalface’ is a good representation in terms of general vibe. Though to really get where we’re coming from right now you’ve gotta hear the new album! Which will be kind of tough until it’s out on August 13! From the album though, I’d probably say either the songs ‘Hold On’ or ‘Whole Truth’.”

S] As a band who have achieved so much success over the last year – what are some of the biggest challenges you face right now?

R] “The biggest pressure on us was actually writing the album itself so now that’s over we’re pretty chilled to be fair! We did everything ourselves last year with no backing or support which we’re massively proud of, but now we’re with a major [Sony], we’re looking at massively turning things up a notch, hopefully doing everything we did last year and more!”

S] How do you enjoy performing at venues up North – do you have any favourite stops?

R] “We love playing up North, in general I think crowds are we more up for going mental at shows which is what we’re all about! Manchester and Newcastle are our current faves though our last few shows in Leeds have been quality, so really looking forward to Slam Dunk Festival this weekend.”

S] How was The Used tour – any stand out experiences?

R] “All the shows were amazing! Think the moment that will last forever in my memory was in Birmingham when Bert announced on-stage he was going to have his way with everyone in the room then pointed at me side of stage and added ‘especially you’. Freaked me out just a bit though, proper funny!”

S] Have they taught you anything, or have you taught them anything?

R] “I don’t know if we taught them anything! Watching them play every night though it really hit home just how many great songs they have. Though it’s years since they released their first few records the tunes are still pure quality and everyone was singing along to every word. It sounds kind of obvious but if you want any kind of shot at becoming a successful band you need good songs!”

S] If you guys could perform a duet live on-stage with the guys in The Used (much like Bert has done with Gerard Way for ‘Under Pressure’), which cover song would you perform and why?

R] “It would have to be Daniel Bedingfield‘s ‘If You’re Not The One’. I’d take the first verse and chorus, Bert could have the second batch and then we’d come together on the mid 8 and final chorus. Epic. Daniel actually came down to one of our London shows last year and joined us on-stage for an impromptu duet on our song ‘I’m Good’. I wished we could have done ‘If you’re Not The One’ then I genuinely love that song!”

R] “An axe, swords and other cutting type weapons are great for decapitations and finishing the zombies off properly, but if you’re surrounded by too many and need to get away quick, there’s the danger of the blade getting stuck if it’s not a clean chop. Baseball and cricket bats don’t have this problem as they can be used to fend them off and go for a quick bash so you can run for it. With an axe you have the best of both type of weapon, using the axe-head if you have time for the full kill, or holding it the other way round to go for the strike and run.”