Who doesn’t love the fuckin’ Dropkick Murphys, man? In advance of the release of the band’s new record, ’11 Stories Of Pain And Glory’, and err…Christmas, we chat to drummer Matt Kelly about the band’s latest inspirations and more. 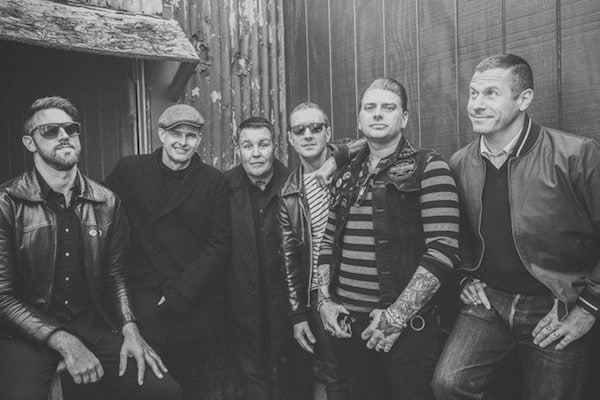 On the positive end of things, our families, friends, and good times. On the negative end, our country divided and torn to shreds, the opioid crisis in New England and beyond, and the Boston Bruins…

S] ‘The Lonesome Boatman’ is a proper anthem! Can you talk us through the development of that track?

Thanks!!! That was us taking the original creepy beginning, and beefing it up with roast wild boar and hornfuls of mead, and an ATTACK!!! mentality. It took about a day of deliberation and experimentation to get it right, but when we played it back, it was just ‘WHOOSH!!!!’ I absolutely love the way that song came out, and can’t wait to – I hope – open the set with it on the upcoming tour.

S] Likewise, ‘We’ll Meet Again’ is a proper feel-good/bittersweet ending as well, a nice finish – can you talk us through that one, and it’s development?

Thanks very much! I think talking about the concept of the song took longer than the actual writing of it. That song took about fifteen minutes to put together— music and lyrics. It was the end of a long day of writing in the practice space and a couple of us were dicking around on our respective instruments.

It just happened. Lyrical content had to be honed a little bit and little parts had to be snipped and pruned, but if you heard the recording of our first run through it fifteen minutes after we wrote it, it would be almost identical but for some lyrical ‘blah blah blahs’ to fill in a couple gaps.

S] How do you look back at the success of the band over the years, and what is your attitude to success these days?

I think it took a lot of touring and walking the walk as far as what we say to what we do, and a boatload of loyal supporters. Our attitude is gratitude. Sure we might write some catchy tunes, but without the people who have been following, listening to, and supporting us for the last twenty years, we’d still be in that barbershop playing Clash covers. Our success is contingent on our fans’ support, and without them we’d be nothing.

I don’t think anybody in the band has let success get the best of him. There are always better musicians, better songwriters, and better people doing better things… so why let it get to your head? Keep the fire of your passions burning, whether it’s merely smouldering embers or a raging inferno.

S] How will you guys be spending Christmas and the New Year?

I can’t speak for everybody in the band except for the fact that we’re not playing on either of those occasions. For me, Christmas will be spent right here at home at Kelly Towers with my family! Out to dinner and then Midnight Mass on Christmas Eve, and later on Christmas Day we’ll open gifts. I have an almost-three-year-old who is looking forward to Santa’s bounty. Then a big Christmas dinner here, and St. Stephen’s Day dinner at my sister’s with the rest of the family.

New Year’s Eve has never been a big party time for my wife and I… If any of our friends has a time we might stop by, but we usually lay low on that night.