It is a rare day in April that gives us sunshine, but with Drowning Pool in town, it seems even the weather was making their visit as pleasant as possible. We had a chat with drummer Mike Luce and new singer Jasen Moreno, to see how the boys have been doing. Cue battered fish and mention of a certain purple dinosaur… 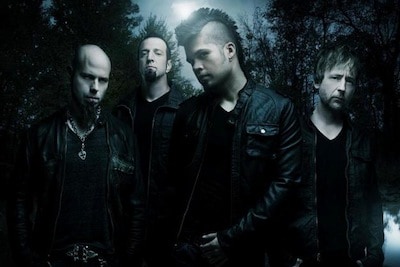 “You’ve got to keep going, roll with the punches and move on”

It’s brilliant having you guys in our city and obviously, Fibbers isn’t a huge venue. How do you guys feel about the smaller venues? Any favourites? Jasen begins by revealing that not only is this his first tour with DP, but it’s his first time out of the United States – massive welcome, Jasen! The new kid in town says that this is going to be very special to him and that all the venues will be favourites.

Instead of feeling the pressure of having three pairs of previous singers’ shoes to fill, he states that he has a “healthy respect and a great love” for the history and previous line-ups of the band he now fronts. “The best I can do is all I can do. I just do it for the fans.” And as fans, we certainly agree with that.

Cautious about bringing up any sore spots, we ask if after original vocalist Dave [Williams] died, there were any doubt for the future of the band. Mike starts by commenting on how lucky they all are and have been since the band started. “You never think that you’ll one day have to play without him. Never crossed our minds that he would be taken from the earth how he was. To quell any rumours or false reports; hyper cardiomyopathy of the left ventricle – that’s what killed him. There was no drug overdose.” The drummer explains how “you’ve got to keep going, roll with the punches and move on”. Indeed.

Keeping up the theme of potentially raw issues, our next question is how did the band react to the misinterpretations surrounding their song ‘Bodies’. Jasen tells how he, as an outsider at the time, understood it all. Stating that everyone is different and will interpret songs differently, his reasoning is sound and well founded. “If you’re crazy, you’re crazy. In times of tragedy, people want scapegoats. All we know is that this song was written about a moshpit, not violence.” Mike chimes in, “You don’t write a song for that! It was never written for any of that. The whole interrogation thing in Guantanamo Bay? Yeah, we heard it was played there at intense high volume, but then so was the Barney the Dinosaur theme tune!” It’s agreed that the band will still stand behind the song widely regarded as their most famous. They play it at the end of their set though, “We don’t want to blow the load to early, ya’ know?”

We discuss how the members have progressed throughout the years. Mike decides to comment on how the tools available (Pro-Tools, digital software) in making music these days have progressed, and how they can create new things. “CJ has always been chock full of riffs and Stevie’s a great writer too.” He compares Jasen’s writing style to that of previous singers and has described his effect on the band as, “Morena-mania”.

Before leaving The Habit for the band’s souncheck, the consensus from the veteran drummer and new singer on favourite track from the new album is ‘Anytime Anyplace’, a choice with which we definitely agree.

Soundcheck done and fish and chips in hand, I catch up with Mike outside the venue for a few more questions. So, who is the best artist he has personally worked with? He says it’s a tough one. “We worked with Nikki Sixx, that was kind of surreal. When you grow up being such a huge fan and then you’re in the studio, banging ideas off each other, playing drums and he’s giving you the nod of approval – he’s arguably the best drummer in the world so that was pretty huge for me.”

The second part of the interview is rounded off with a discussion on their upcoming 20 year anniversary – any plans? Mike just says that after everything that has happened, if the band can bring out another album and tour, (by which time, 2016 would be at least very near) then that would be happy. “We deal in terms of album and tour cycle, so if we can do that, after everything we’ve been through, that’d be remarkable.”

A handshake isn’t had, as Mike still has the grease from his chippy dinner on them. Savour it, mate, they were the best in York!