On the eve of his headline performance at York premier goth festival DV8Fest at the Barbican this past weekend, on July 22, Soundsphere were lucky enough to chat to the electronic pioneer, Gary Numan about performing at the festival, his collaboration with New York’s Battles and new material. 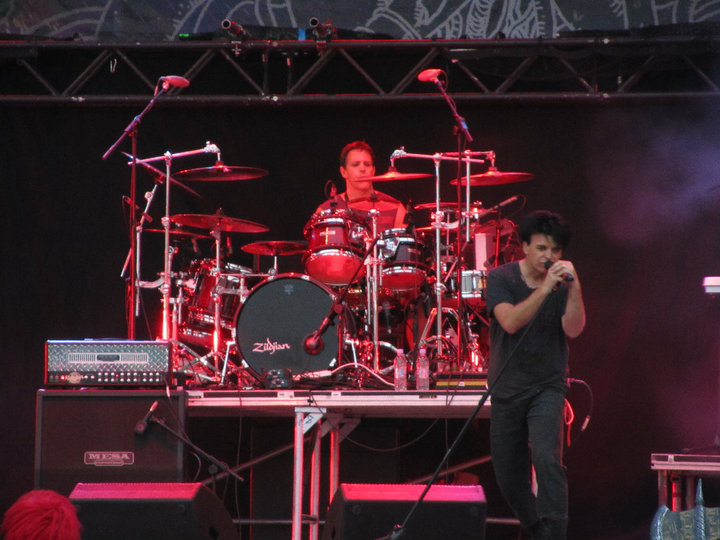 For Numan, the man who essentially propelled music into an electronic fever in the ‘80s, festivals are the perfect opportunity to both play to his long-standing fans and to also broaden his appeal to wider generations: “You play a festival and chances are, 90 per cent of the people there are not hardcore Gary Numan fans – they get to hear a wide variety of music, and that’s the brilliant thing about them.” A fan and regular of the festival circuit, DV8fest promised to be a new prospect for Numan also: “The more alternative ones [festivals] like DV8 which are more spread around town in different venues, I haven’t really done that before so for me it’s a different experience.”

Of course, all these live performances are an opportunity to play his upcoming material, both for his album ‘Dead Son Rising’ due in September and ‘Splinter’ an album of completely new material out in the near future. However, Numan is keen to explain that the set-list of a gig or a festival performance remains pretty much un-changed: “We tend to do the same thing, irrespective of where we play – it doesn’t really matter if we’re in York, whether we’re at Sonisphere or whether we’re at Primavera in Spain – this is what we do and this is who we are.”

For the upcoming album, ‘Dead Son Rising’ Numan describes how this collaboration with long-time creative partner Ade Fenton birthed a new side to the Numan sound, one that is expected to be different from ‘Splinter’ which is described as being music that “attempts to rip your face off!” ‘Dead Son Rising’ however is a more electic offering: “We been able to go off and do some softer songs in amongst all the heavy stuff and a couple of songs about relationships, which is not a subject I would ever f***ing touch normally! But with this album to able to do that, has actually been really fun and alot more interesting to write things.”

Numan has forever been hailed as a musical inspiration by everyone from Dave Grohl of the Foo Fighters, Marilyn Manson to Trent Reznor of Nine Inch Nails with whom he has worked, and preformed with in the past. His fusion of electronic and industrial sounds have widened his fanbase and it is what allows him to fit right in as a headliner of a goth festival and still be celebrated as a mainstream pop artist. With over three decades of activity, Numan can easily spot how musical trends can begin to repeat themselves: “This idea that you can progress music by recreating what’s already been seems to be flawed in my opinion – there’s no harm in it but I think because of my age and history that it doesn’t appeal to me particularly.” He maintains that, “There’s always bands that I am impressed by,” and with this in mind, Numan has worked with New York band Battles and featured on their single ‘My Machines’ which appears on their new album [‘Gloss Drop’] and for which he will begin shooting a video in LA on Monday.

Being a father of three young children has also had an effect on Numan’s outlook and where to look for inspiration, sometimes unintentionally: “It’s a very difficult thing to explain but it fills you with a certain sense of trepidation and worry – and that kind of stress and worry tends to feed its way back into what you write and the attitude with which you write. I think it does find its way back into the process.”

With a career as long and diverse as Gary’s, the trick is to never become predictable or banal: “When you’ve been doing it for a very very long time, it becomes harder, you have to be very careful that you don’t allow yourself to slip into ways of doing things and you must not become predictable. If you sit at the piano and go ‘I’ll do this first, and then I’ll do that bit and that bit…’ then it starts to follow a pattern and that’s kind of the kiss of death.” Numan’s passion for making electronic music and constantly pushing boundaries is unquestionable, his upbeat attitude towards life is affecting, and while many will focus on his dark lyrics and the heavy sounds that dominate his output nowadays, it’s true to say that music is a great outlet for this iconic artist and his ever-developing creative flow, showcasing a range of emotions. Numan is a pure and true musician, and so with that in mind, any readers should probably pay attention to his advice.