For the entire of his career, (that’s about twenty years, folks) Ginger Wildheart has waited for the day when he and his music could be independent from a record company. This is something that he is so passionate about that Ginger’s neck now proudly sports a ‘555′ tattoo which even his own mother would approve of (he reckons). His latest album was entirely funded by fans, by you guys, whose entire efforts meant that the end total was 555% of the original target, thus making a label defunct. The fans got to choose which of the songs made it onto the triple album named ‘555′, available only to the people that donated. The rest of us will only get to buy a single album (named ‘100%’) made up of twelve songs, embodying the “music made for the people by the people” mantra that Ginger employs in his Pledge music manifesto. Ginger tells us that “there are songs that I wish could have gone on the album, but the deal was always gonna be that the fans were gonna choose the songs”. 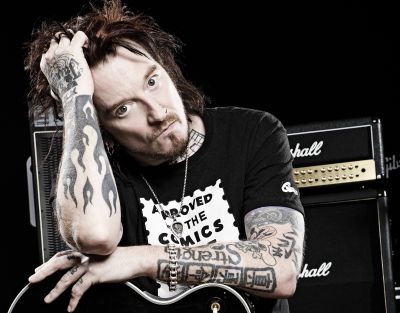 “If you come up with a really stupid idea, your fans will tell you”

Ginger is really enthusiastic about what PledgeMusic has to offer. It’s a platform that “allows you to communicate directly with your people. There are no negatives; it’s just cutting out the middle men. You own all the rights to your material. It means you are communicating with the people that you’re writing music for”. Ginger is already telling every musician he knows about Pledge, especially those who just want to write songs and record them. “The freedom really is liberating” he says, “I want to do so many things with Pledge; books, concerts. The beautiful thing about Pledge is: if the people don’t want it, you don’t get green-lit. If you come up with a really stupid idea, your fans will tell you that it’s a really stupid idea.”

Remarking on Twitter among other social network sites, Ginger exudes excitement on what it means for a musician to be able to talk to the fans, on what they like or don’t; “Communicating with your fans is the most important thing for an artist. Breaking down that wall is important for music to grow and get healthy. I’ve worked hard to establish a fanbase, but to maintain one, and to get new people listening, you’ve got to get involved yourself.”

A prolific singer/songwriter/guitarist, Ginger lets us into his secret. One of the songs on 100%, ‘Internal Radio’s hook was written by his young son, and is credited as one of the writers, must be in his genes. A song about how there is always a song in Ginger (and his son’s) head, “My son is the internal jukebox that I can never get rid of, which is sometimes a hindrance when you’re trying to sleep, and obviously a blessing when you need to write thirty songs for a triple album”. Another stand out track from the album, ‘You’re the One…’, is a more intimate song. Ginger tells us that it was written a long time ago when he had just become sober in New York; “I was coming to terms with things that you don’t normally think about. It’s really important to your relationship to make your partner feel special, like she is the one.” ‘You’re The One, You’re The One, Yeah, I Know You’re The One, You’re The One (Yeah, I Know You’re The One)’ is the full title, which is the entire chorus, and Ginger’s favourite song title of the album.

Ginger Wildheart and Friends, the band that Ginger has “inadvertently been looking for his whole life”. A band that are so enjoyable to play live with that Ginger’s love of playing gigs has been revitalised. Having convinced himself that he had retired and just as he convinces himself that didn’t want to play shows anymore, Ginger ends up with the best band he’s ever played with, a group whom he actually misses when they’re not around. So, what started as a couple of warm up shows turned into five shows that he now wants to extend again. Bubbling over with love, Ginger showers his band with praise. Chris Catalyst has “got such an amazing voice. The harmonies are always in tune when we play live. He really is a fantastic singer. Rich Jones is a really good team player. A great positive energy. Denzil at the back is fucking insane, he plays the drums like three drummers combined. Victoria has an amazing voice, her energy is really infectious. It’s also great to have a girl around, ‘coz everyone behaves themselves. And I don’t like to do anything without Jon Poole, I just hope that he’s there for whatever I get involved in for the rest of my life.”

Moving on to discuss his own career, Ginger reflects on what it means to still be one of the front-runners in UK alternative music in 2012: “If I was to look back at my career, the main theme would be that I’ve made a lot of mistakes. Luckily I haven’t made the same mistakes again, so I can chalk most of them down as lessons,” he adds. “A few things make no sense, right now, but that’s not to say they won’t be the catalyst to something amazing in the future that might never have happened without something screwing up. That’s happened so many times I don’t even think about how big a mistake is until I’ve had chance to view it from a distance. So I just keep moving.”

One thing that we appreciate Ginger for (and we believe he is appreciated for around the globe) is his honesty; that grit and determination that makes him so widely respected, and highly regarded. Taking that into consideration as we complete our chat, we talk to the man about what inspires him most at this time outside of the great musical pool that he’s still diving into head first into every day with exactly the same passion and exuberance that he had back in the early 90s. He says, simply: “What inspires me now is just being able to be of service. To my family mostly, but also to the people who buy my music and the people I can help with my experiences,” he says. “I know this might seem like it is within music, but being of service goes much deeper than being an entertainer. It’s about sharing yourself with others and helping as much as you can. I really believe that is what we should all strive to do, in order to feel truly worthwhile.” Damn right, mate.