Interview: Glamour Of The Kill

Home » Interview: Glamour Of The Kill

Time for more York-related awesomeness. Anything that links back to your city is awesome in the individual eye, of course, but that sentiment is now shared worldwide about Glamour of the Kill, York’s upcoming staple band. Today we talk to Chris Gomerson, guitarist and vocalist of the band about The Alternative, Savages, and Trisha. 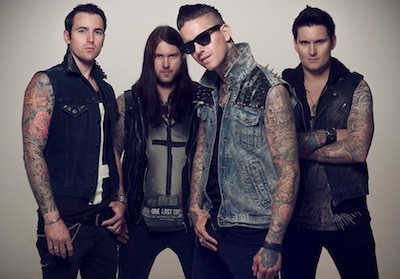 S] How are your travels treating you?

C] “Awesome thank you! We’re really excited to be travelling around.”

S] There’s a lot more heaviness with ‘Savages’. Did you make that change deliberately?

C] “We just write things as they come. We don’t aim for something as such, it’s very strange. Writing for us is really organic. We bash out riffs and if we like ‘em, they stay.”

S] There’s some relatable themes on there, like the ‘what the fuck happened last night?’ concept of ‘Live For The Weekend’. Is it important for you to relate to the audience in this way?

C] “Some of our stuff is every day life kinda party tunes. We drink a lot. We don’t really have a running theme throughout our albums, it’s varied themes, we pick one, and we run with it.”

S] ‘Second Chance’ is a cool music video. How do you guys go about putting your music and lyrics to the screen?

C] “We like to have a lot of input in our videos. We’ll sit down with the director and hammer out a treatment for it, and make sure it’s something they’re really into. It’s cool man. I know that a lot of people just rely on the director, but we like to get involved.”

S] You guys were pretty extensive with EPs in the early days, and got your foot in the door that way. Has your mindset changed since that time?

C] “I wouldn’t say I feel older and wiser because I haven’t got wiser, I’m still making the same stupid mistakes. But you learn more about your music and your style, figure out which direction you wanna go in. With ‘Savages’ we’ve really found what we wanna be doing.”

S] Your music is very interactive! Is that a deliberate thing with your music?

C] “We don’t write stuff as such with crowd participation in mind, it just seems to work out very favourably with that. We like to write sing-a-long choruses, woahs and stuff like that. As long as there’s a nice balance where we can have circle pits here, and melodic bits there, it’s a nice mixture.”

S] Your band is more proof of York’s awesome music scene. What would you say to the new bands?

C] “Do everything you can. Every day you’ve gotta think ‘What can I do to grow this band’? Every day.”

S] It’s a tough industry. What keeps you motivated?

C] “The alternative, which is to be in a job I don’t wanna be doing. If you’re not gonna put the effort into this, then go do something else.”

S] Absolutely. Do you have any personal influences that feed into your guitar style?

C] “Not really. I’ve been brought up on a really crazy mix of music: Elton John, Queen, Gloria Estefan, Billy Joel, Garth Brooks. There’s not one area of music that I’ll listen to more than another. Personally, I like dance music as well. I listen to everything across the board. It’s a fu**ed up iPod.”

S] What do you do to wind down?

S] What are you up to this year?

C] “We’re flying over to the US to tour with Pop Evil and Escape the Fate, then we’ll be playing Sonisphere, and writing a new album over the summer, and get something locked in before the end of the year.”