In our latest interview, we talk to Thom and Ash, the lads that make up God Damn, the fascinating rock outfit who put music out so that the “degenerates” who follow them can sate their gluttonous tendencies. Below we talk about their growing success, the new album, and how Eraserhead inspired them. The band, that is. 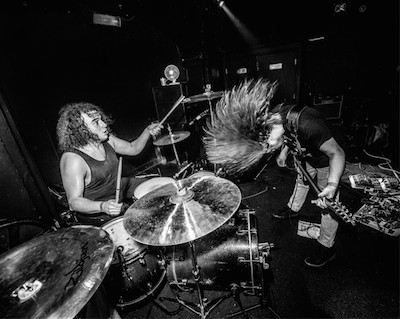 S] You’ve got a lot of acclaim lately. What are you up to at the moment?

A] “We’ve got the single coming out on the April 21, and we’ve just been in to Metropolis Studio at the beginning of March to record our first album, which is due end of this year, beginning of next.”

S] Is there a track that readily defines God Damn’s music?

T] “There’s a song on the album that really defines us, called ‘Vultures’, which is kind of anti capitalist and deals with a lot of gripes that we have, but it’s got fast riffs, a melodic bit – melodic can be a dangerous word when it comes to rock bands, ‘cos it can mean some really terrible music – but it’s melodic in the oddest sense.”

S] You’ve got a lot of bands supporting you. What’s it like to have this growing level of success now?

T] We’ve been around for a long long time, and we’ll carry on with it, but we’ve met some really great people through this band, and people with similar interests, and they’ve always been very supportive of bands. We’ve just seemed to gather momentum lately, so that’s really cool. But I’m not gonna lie, we’ve busted a fu**ing ball for this. Things might have come together quicker if we were better at sucking dick, but we’re not the sort of people who say ‘We should talk to this person, or get in with this band’. We hate that kind of thing. It’s just been natural, we’re nice to people who are nice to us, and people who understand the music.”

S] How have your inspirations changed over time? What motivates you guys to keep going?

T] “We love it. We’re pretty thick-skinned, and we deal with it. This is our therapy.”

S] What sort of stuff inspires you?

T] “Talking to people I love and friends I love. People’s opinions rub off on me, or I’ll disagree with certain opinions. It’s all in front of your face.”

S] What are the biggest challenges now?

A] “I’ll tell you what the biggest challenge is. The audience understand what we’re all about, but you always ask yourself, do people get us?”

T] “People think we’re a straight up satanic thrash band. The band name is a gift and a curse, and we have issues with getting regular air play and getting playlisted on certain things.”

S] The video for ‘Shoe Prints in the Dust’ comes out soon. What inspired that track and the video?

T] “The video has a bit of a pop at hip-hop culture, and what children are exposed to, which is a bit of hot topic now. It’s a jab at that, and there’s the anti-capitalist thing which we touch on a lot. I wouldn’t go out and say that we are a Rage Against the Machine sort of band, but we do touch on capitalist and cultural issues that we face in a very gluttonous world.”

S] This is more of a personal thing for Soundsphere, but are there any plans to release ‘In Heaven’. the Eraserhead theme, at any point?

T] “That’s when we first started the band. Probably one of the first songs we recorded. How it happened, was I was talking to the guitarist and he suggested we do something really off the wall, and he showed me a clip from Eraserhead, and then I watched the entire film. It’s just an amazing core progression with creepy songs. Whether you believe in a heaven or a hell or whatever, you can take it in a million different ways, just that lyric alone.”

T] “Last time we played Sheffield was really cool. We’ve got a festival coming up too. We’re mates with Rob from Wet Nuns. He got me this really nice liquorice tea. Next time I come to Yorkshire I’ll get myself more interesting tea.”