Grant Nicholas, most famous as Feeder’s frontman, took time out of his recent solo tour to chat to Soundsphere. 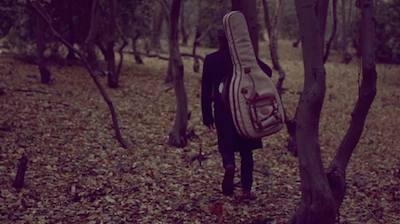 S] You’re playing some interesting cities. How important is it for you to be able to do these smaller shows?

G] “Sometimes it’s harder to sell tickets to smaller places. But I mean we’ve had some good shows in the past in York and it’s a lovely place as well. I like York. It’s just nice to go and reach different areas. I’ve got a different fan base in Feeder, it’s just a different project, and it’s almost like starting again. It’s been fun going back to some of the smaller venues. They’ve been pretty mixed sizes. The biggest I’ve done has been around 800 and the smallest has been 150 to 200, so it’s been pretty mad. But it’s been great. My first time in Europe as well, I haven’t done any shows with Feeder there for three years. I was pleased to see that loads of people came to the shows because you never quite know how it’s going to work out but it was really successful. It’s just sort of like a second look at it because I was touring last year, when the album came out, and it went so well that I kind of want to do some more. So we put in part two of the tour and I’ve also recorded a new mini album to go with ‘Yorktown Heights’.”

S] What are the major challenges for you in terms of starting again?

G] “Feeder’s not over, I’m still going to continue doing that, it’s just I want people to know that this is a serious project. I don’t want people to think this is some kind of hobby “oh let’s just sell a record” thing like a lot of artists do. This is something which I want to continue and do more of but I’m also going to be doing some more Feeder stuff.

The only thing, in smaller venues you have one crew, a little van, you’re on a tight budget. Obviously the venues are small, so the gigs are small, and I’ve got to pay my band as well. It’s financially quite tough, as it is for any band out there, but at the same time this has just been really enjoyable. Very relaxed. A whole different sound and vibe to the Feeder stuff but in some ways that’s perhaps a good thing. I mean, there’s no point in me doing what I do with Feeder.”

S] Is there a track that you feel defines where you are at as an artist right now?

G] “‘Black Clouds’ was written right at the end of the ‘Yorktown Heights’ album and it was one way to finish it. It didn’t have any drums on it, it just had like a loop. So it was a track I always liked. It’s a little bit darker than some of the other tracks but it’s kind of still uplifting at the same time. I was almost trying to write something that has a soundtrack feel. If you put on some heavy guitars and that, it could almost be a Feeder track. There’s bound to be some similarities along the way because it is the same person writing them. But I have tried to do things differently, it’s all pretty much acoustic and there’s a bit of electric here and there but not a lot. It’s a whole different approach. I kind of wanted the songs to be a bit simpler, a bit more old school in their approach.”

S] In terms of your own self as an artist, how far do you feel you have progressed as an artist?

G] “You know what? I’ve always loved the acoustic songs. In fact, I think I got signed on the back of one of my acoustic tracks. The head of the label just thought “This guy can write acoustic as well. It’s the sort of band that could maybe evolve.” And I think Feeder has evolved. We still love to rock out but I have always had that acoustic side. I still feel really inspired even after 20 years of being in the business. It’s just nice to have a different show really. I’m a songwriter that sings. I didn’t plan on being a singer, it just happened. I just wanted to be a guitar player in a band, write songs, and I just ended up being the front man. But I’m basically a songwriter, that’s what I love doing. I particularly like doing this at the moment, it’s so different but really enjoyable and inspiring. The different thing when you do a solo record, you can put some things that are a little bit closer to your heart. You can write about things that make you adult, like family. I’ve got two kids now. That does change the way you feel but having kids can keep you a little bit younger, a little bit more youthful as well. I probably thought a lot more about the lyrics on this record, because the vocal is very up front. I’m not saying the vocal isn’t important on Feeder tracks but when it started off it was also about the guitar sound and the energy of the band. This is purely about the songs, so the vocal has got to be right, the lyrics have got to be right. I’ve probably worked a bit harder on that and maybe when I go back to do some more Feeder stuff I’ll approach it in a slightly different way. Who knows?”

S] What sort of stuff inspires you outside of music?

G] “People, life, relationship stuff. Sometimes a song can just come from a headline in a newspaper. I write songs about, you know, some of my friends have been through some pretty tough times. I have used that, I have written stuff about my kids, I have written about my family, relationship stuff, past relationship stuff. It’s just a mixed bag really. I think some people say “oh some of these songs are depressing and sad” but I don’t think that, I think some of it is but the rest is pretty uplifting. Even if they are lyrically a bit dark and crazy, there’s a little ray of hope in there. Try and do that naturally. Because I write melodies as well I think the melody can make it feel less dark. It’s a combination of the melody and the lyrics, if you get that right, that’s always the challenge of any songwriter. But I like to write songs and that’s what I do and I’m just so lucky I still feel inspired to do that. It’s hard work and the music industry isn’t what it used to be, let me tell you, but it’s still something which I love doing and which I need to do.”

S] What could people expect from this tour when you are playing in these smaller venues?

G] “This is very different. Feeder is a band; it’s not just about the songs but it’s about the chemistry of the band. We always had great drums in Feeder as well. It’s got a lot of energy, it’s got some edgy moments, it’s a little bit punky here and there. This is a bit more about the purity of the songs, it’s definitely much more acoustic, although I’ve still got a band vibe around it. It’s not just me, I’ve got a four-piece band. Some of the songs are stripped back, really really intimate. It’s almost like I’m singing in the kitchen on some songs. It’s that intimate. It’s got a bit of a lounge-y thing about it in some places. Little bits of everything; it’s got bits of folk influences, it’s got bits of country, it’s got bits of classic song writing stuff. All the artists that inspired me growing up. It’s a really mellow show but it’s still quite diverse. Some of the songs are really simple and then other ones are a little bit more uplifting and anthemic but in a sense of the more acoustic sound I’ve got going. It’s a little bit quirky as well because of all the sounds. There’s a lot of keyboards on these records, I like to experiment with a lot of that. That’s all part of the live show as well so it’s got a little twist of electronic little moments as well. It’s not totally retro acoustic. But we’re super mellow. We don’t have many lights. It really is about the music and hopefully people seeing a bit more of me as a performer. I think I’m a little bit more relaxed with this in some way. A little bit more loose and a little bit more organic in some way. What I would say is the tour has been really interesting. It is quite a laugh because people get to know a bit more about me and when it connects, every show is different, but when that happens it’s quite nice because I think people feel like they’re part of the show then.”

S] What will you look back on when you finish your career as some of your best memories?

G] “I don’t know because we’ve obviously been working but I’ve not really been told to think about what I’ve achieved. Maybe I don’t really want to think too much about it because I’ve still got more to do. I’m just pleased that we stuck at it. We were never really particularly championed in the press, I know the rock press were pretty good to us, but you know, in general. I think we’ve been a little bit sort of put to the back because people could never really label us. But I suppose, on a positive side to that, maybe that’s the reason why we’re still here. Often bands that are labelled as part of trends come and go. I think it’s hopefully the strength of the live band and the songs that have been written over the years are the reason why we’re still here. We’ve got a great fan base and it’s very diverse because we’ve still got some really young fans that still come to our shows, or are just finding out about us, but then we’ve got some old-school die-hards as well. So I think “we’re still here, we obviously did something right.” There aren’t many bands like Feeder really, there aren’t many of us left that have been around that long. There’s part of me that thinks Feeder should have been a bigger band but we’re not the only band who feels like that. We’ve still got more to do, so you never know.”