Hoobastank frontman Doug Robb chats to Dom Smith of Soundsphere about the band’s upcoming new material, and the UK tour with P.O.D and Alien Ant Farm. 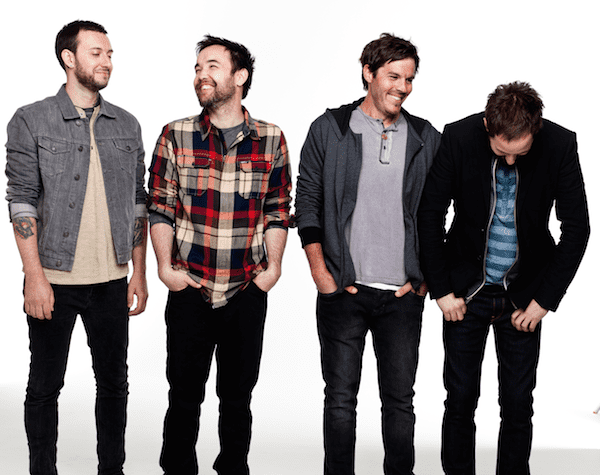 S] So, you’ve been prepping for the UK tour and a bunch of really cool stuff. Tell me about your days at the minute, is it all winding up to the UK tour and coming over here I guess?

D] “Yeah, we are really excited. Getting a lot of input as to what songs we should be playing and we’ve started rehearsing, get the ball rolling again. We have some shows, I call them one-off shows. A local one in Los Angeles, kind of get a little stage time; and then I’m ready to go.”

S] What made you decide to come back and do the tour this way?

D] “It’s not like we haven’t thought about coming back to the UK for a long time, I think it’s something that honestly comes up every year, like clockwork. But some stuff, it never pans out, whether it’s because other shows pop up in other parts of the world or something happens where it doesn’t make sense for us to do it. You know, one year turns into two, turns into four and the next thing you know it’s a decade. And then we go, ‘why haven’t we done that there? That’s crazy.’ So this time around our booking agent just kind of threw it out there, like what about going back to some of these bands, the tour is worth it; probably evoke a similar type of nostalgia to our fans. We were like, absolutely, if they’re willing to do it lets do it, it happens. I feel like everyone else in bands are in the same boat, like going back by ourselves would be great but going back with all three of us would be brilliant – I’m just glad it worked out.”

S] I wanted to ask you, what kind of stuff has inspires you now in comparison to when you first started? How would you say you changed and developed as a person and a musician since you started out in music up until now?

D] “I’m just thinking to myself here, but the best music is written when you’re free of constraints and stuff like that. For me, I would say ignorance is bliss. My sole focus is the sheer excitement and joy of writing and performing music you know? But I think, fast-forward 20 years, I guess you analyse everything you do from a different perspective and I think honestly for every musician that’s how you go about it, but a tricky balancing act is to try remain pure as a musician and writing literally just for fun, rather than trying to chase any type of commercial stuff. It’s an interesting line to walk to go, you know, I know this formula may work commercially but this is what feels right, to go with what feels right rather than kind of chase up and down; it’s just a different way to approach music.”

S] Now I want to talk to you about outside of music, outside of the industry, what has inspired you? You have mentioned you have got family, what kind of things motivate you outside of music? This is in contrast to when you were starting out, like I say in 94’ when you guys kicked off?

D] “Yeah ’94, we got together in ’95 for a bunch of shows, so yeah it’s been 20 years. I think, like anything, it’s not a conscious shift focus as far as why we play music or what inspires us, it just kind of happens naturally like anything else in life. Honestly, it’s all about this creative thing you’re doing that’s so exciting – it’s really all about that, just fun and excitement. You have aspects of music, it’s just what it is. But I think now-a-days, I don’t think there’s one particular reason why it’s changed, there’s a million reasons like age and experience and all that, yeah it’s still a lot of fun to create music and playing at your depths – at the core that’s still what it’s about, just a lot of stuff surrounding it now.
My family, yeah, I get a lot of emotional and lyrical inspiration from being a dad and being a husband. Also because I’m older, I see the world differently and I see pop culture differently and where we fit in it. It’s almost like before I was writing from the inside and looking out, and now I’m kind of writing from the outside and looking in.”

S] So, you’ve got more perspective I guess?

D] “For sure, I definitely have. My priorities are a lot different to what they were 15 years ago.”

S] How do you look back on the monumental success of those records and those songs that kind of launched you to becoming this world-renowned band? How would you define your success?

D] “Success is different for everyone because often of different categories, some of being music that I enjoy. Personally, I don’t really listen to our music outside of rehearsals and performing it – it almost never happens. But there are a few songs that if I do listen to them I will listen to it the whole way through and none of them were ever singles or record popular. Because of this, some of them were my favourite songs so they were successful on that level. Obviously some of the singles we’ve released were very commercially successful and accepted. Looking back on it, I think, ‘that’s great!’ I’m glad that we worked on something that everybody really liked. I don’t know if that defines success, but at the end of the day ironically I think some of our most difficult times were as people, within the band, it came at our most successful commercially and there was a lot of stuff that comes flying at you, that personally when you’re younger, can be difficult to deal with. But success comes from just being happy, be glad you’re doing what you like to be doing and be happy regardless of whether other people are buying it or not.”

S] What are the songs that you do listen to and can look back on that even may have defined you? Are there a couple of examples?

D] “I feel like with literally every song there’s stories and memories that will pop up simply because you’ve had to write each one, and whether the memories or stories are significant, like ‘oh my gosh, I’ve never performed this song in front of 100,000 people at a festival’, or whether when we first wrote the song and I didn’t like a certain line, there’s always some memory associated with each song. There’s a song on our third album called ‘The First of Me’ that we still perform a lot, and because of that reason we really enjoy the song and we really like how it turned out and the message of it. I hear it a lot because of rehearsals and for the most part we play it live, as it was a single, but yeah the band look collectively upon it fondly. There’s a song on our latest album called ‘Slow Down’ that fits exactly the same type of criteria. It was a single yet the band really likes to play it and like to listen to it, I could kind of listen to it over and over because I really enjoyed it. I can’t think of one single that I could continuously listen to, ever!

S] You’ve got the UK tour but a few years ago when you released the last record, what are the plans you’ve got that you could tell me about at this point?

D] “It’s weird it’s kind of like we have a lot of options to look at. After the UK we are going to be pretty busy through summer into end of fall, I think there will be a lot of shows in the states. But at the same time for the past few months we’ve been writing a lot, and not so much getting in a room together and trying to write together but we will run through these ideas at home and record them and literally email them to me or hand them to me on CD or something. I’ll then put them into my computer and work on them to make them into songs. Traditionally in the past we would demo songs and ideas, but we’d have a few. You hear bands saying, ‘we went into the studio and had 40 songs to choose from’. We were never one of those bands; we only had 13 songs knowing that they came out of nowhere. This time around I always thought of that we could write a tonne of songs, but it never worked out that way. I ironically right now was kind of sitting on the most amounts of song ideas we’ve ever had without having an actual album. We’ve got more ideas and songs recorded than ever, so we were thinking, what do we do with them? Even talking with the manager and people about different producers, so obviously we are going to record the songs and we actually started with a couple of them. But in the great landscape of the music industry, it’s how we want to release these. Do we want to do it again; like have 12 songs on an album, or do we want to do something a bit different like just release a few songs a month for a full year? So we haven’t really set a course and this is it, we have a lot of music and we are going to record in the process of it.”

S] Are there any kinds of songs you’re working on at the minute that you can tell me about that you feel you’re quite motivated by, or a new idea that you and the band are working on?

D] “There’s a tonne of songs with working titles, a couple of songs that we are recording right now, a song called ‘Way Of The World’, not to be confused with the Phil Collins song, another one called ‘Chaos’. It’s one of those things were we played with ideas with no direction, and it sounds different from the past. We’ve been around for so long it’s hard for me to tell what the difference is, I’ve just been there.”

S] Have you got a message for the people that are going to be attending this tour? What can they expect?

Doug] “They can expect a lot of smiles to be honest, we are just going to be really excited to be there.”