For our latest interview, we chat to Rod Jones, guitarist for Idlewild about the inspirations behind the band’s first album since 2009, ‘Everything Ever Written’. 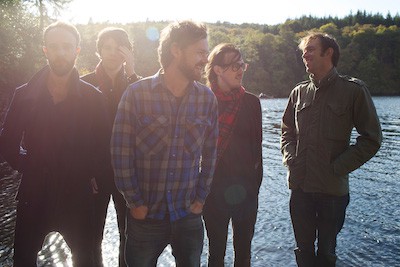 S] How are you guys today? What are you up to?

R] “Good thanks. I’m just finishing producing an EP for a German artist and then going to see Hamilton Leithauer (ex-Walkmen) tonight – one of my favourite new records this year.”

S] What made you come back together for this new record – like, what experiences and feelings made you decide to bring Idlewild back to record an album?

R] “We always knew we would work together again but had no idea whether this would be in two, five or ten years time. I guess it just took a fairly natural time where we felt we had had the opportunity to do our own things, work with other people and make some music on our own terms without the constraints of the band setting. Listening to each others music, there was a mutual respect and admiration, which just led over time to us feeling like we wanted to try write something together again. There was some time where Roddy was in Edinburgh or I could go up to Mull and we just got together and threw about some ideas to see what happened. Having no pressure or expectation of a record really felt so freeing and just allowed us to take our time and try new things, get new people involved and not worry about the usual deadlines or having to make a living from the band. It just felt exciting and fresh and we approached things in a very different way, almost redrafting ideas each time we got together with Colin, Lucci and then Andrew. Each person bringing something new to the songs until we knew we had an album. Having produced my own records for a while I also finally felt comfortable and able to produce this album, which again just meant we were not subject to anyone else’s timeframe or availability and allowed us so much more time and opportunity to build on ideas and try new ideas. It really was just a  case of everything falling into place in such a natural way that it felt right.”

S] How do you look back on the success of tracks like ‘You Held The World In Your Arms’ now?

R] “Success is such a strange thing in music, so often measured in record sales and “exposure’ where really for us we always felt successful in a way that people engaged with our music and we are still able to make music together after nearly 20 years. Obviously certain albums or songs have a larger reach than others due to all sorts of reasons but for me I feel like we have made a record I’m truly excited about and feel really comfortable with the band’s place in the music world. It’s great when songs connect with such a large group of people, but I feel this is something you have to forget about when making music. More than ever now it feels like we have the freedom to just make the music we want to and hopefully people can hear that in the music and connect with it in the way we have.”

S] What about ‘A Modern Way Of Letting Go’ – what feelings does that one conjure when you listen back now?

“It’s really nostalgia I suppose. Much like looking at a photograph of yourself at a certain age. Don’t get me wrong, I think its a great song and a style that we did very well at that time in the band’s life and always fun to play but I feel its something that it would be strange for us to repeat as we are different people now and a different band. One thing I have always loved about the band is that we have evolved and changed quite naturally with time although perhaps the music we were making was starting to feel constrained by the band setting towards the latter albums which is why we took a break to try and remove ourselves from this.”

S] What themes ideas and experiences powered the writing of ‘Everything Ever Written’?

R] “We never really approach a record that way other than the way anyone takes their life experiences and personalities into writing music. Especially this time it was really about having no pre-conceptions, rules or set ideas and allowing ourselves the freedom and openness to try everything we wanted to. Obviously the surroundings we wrote in and experiences we’ve had, have an impact on the sound and feel of the music but more in a subconscious way.”

S] What keeps you guys passionate about making music now, in 2014 – think music, art, movies and such?

R] “For me, it’s the enjoyment of making music as it has always been. Playing and writing with other talented musicians is how I feel fulfilled. In terms of other inspirations there are a wealth of these but certainly for me re-discovering old classics or seeing concerts by people like Neil Young, Crosby stills and Nash or new music by people like Jeff Tweedy, Hamilton Leithhauer, The War On Drugs and Jonathan Wilson. Seeing how other musicians I admire approach writing and playing their music is always fascinating and drives you to want to try new ideas.”

S] How would you say that you’ve developed and changed as a musician, and as a person since Idlewild were last together, up until this point?

R] “As a musician I’d say I’ve just become more comfortable and confident with my own style and exploring ways to put across my ideas. I almost feel like I can play looser and not constrained by feeling everything has to be neat and perfect. I suppose confidence allows you to feel you can leave the ‘mistakes’ or rough edges which sometime give the feel to music. Also producing music for myself and others has given me more freedom and the ability and skills to best put across my ideas without having to try and explain what I am trying to do to someone else.

How I’ve changed as a person is a pretty broad question but I would say again that I just feel more comfortable in myself and thus more open to ideas from others. I suppose loosely this would be called maturing although maybe it’s just getting old!”