You have got to have some appreciation for bands that have the lasting power to span two decades, while exploring genres as diverse as metal, electronica and post-grunge; thus forcing their way into the public eye, with several releases and records placing in the charts, from 2003 to present day. In March 2012, we got the chance to catch up with InMe vocalist Dave McPherson and guitarist Gazz Marlow on a crowded tourbus, and talk about success, their peers and the evolution of their style. 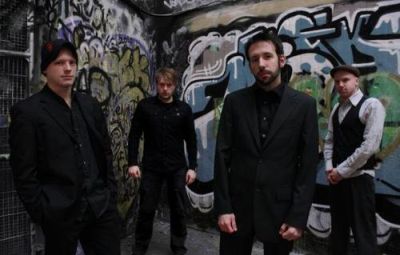 “Trends come and go. We are true to ourselves”

This band has a lot to be excited about. Their most recent release ‘The Pride’, has placed #26 in the UK album charts, been critically acclaimed as “an outstanding record”, and InMe are currently in the process of touring the UK and the rest of Europe to the excitement of their fans. “We’re really enjoying it, it’s going well.” Gazz muses, before Dave chimes in “There are currently 18 of us on this tour bus [including touring partners LostAlone, and the InMe crew], it’s pretty hectic.”

The current tour spans from Scotland, through all the major English cities (thankfully), before the band then go to Germany, Austria and Spain. A lot to be excited about, like we said, and the pair seem relaxed, overall. “The new songs are really going down well, and I feel we’ve found our feet quite quickly on tour,” says Dave, before adding, “apart from the other night when I completely forgot how to play a song! That was definitely the result of a bit too much drinking on my part!”

Moving on, how do the band themselves feel about the ‘The Pride’? Press and fan feedback has been massive, and the brilliantly diverse record has set the band on a real roll for 2012. Dave says, “It’s exciting. It was refreshing to release the album before this big tour.” The band have their work cut out with a total of 46 gigs in the coming months, and have (fortunately) been warmly welcomed so far by fans excited by the new material. The unit are in agreement; “It was a relatively easy album to put together, there were no hiccups and it flowed well. We had it completed in November and released by February so it’s still fresh for us.”

With this in mind, we move on to the band’s overall style, and sense of creativity. Constantly evolving, their 16 year career has seen them blend countless genres, and create some truly innovative and inspiring material. Dave explains, “We never want to do the same album twice, and just mix stuff up. This time, we wanted to create something brand new.” Admirable, considering a lot of band’s tendency to rehash old ideas and never truly evolve to their maximum potential. As Gazz reflects: “I feel we’re always progressing, even in the way we write, we push ourselves all the time. One technique we try is writing a song that we will have to work hard to learn and play live, that way we are always challenging ourselves.” With that in mind, the pair think on why they choose to pick at different sounds to mould their overall sonic product: “We draw a lot of inspiration from 80s artists like Talk Talk, Tears for Fears and then more modern bands like Prodigy. We like playing with electronic music; the tradition of mixing electro and guitars has been played with a lot, but it gives us a chance to experiment and create new and interesting material.”

Considering the act’s origins in 1996 (‘Goosebumps’ was on TV, Power Rangers were still cool… sort of), they have come a long way. “We’ve grown as song-writers, in the way that we work together, and our new material is a lot more of a collaborative effort than our earlier releases. We all gel, and we have a great lineup.” This is definitely the factor that has kept fans awaiting new material; InMe are determined to surprise. From their earliest, to their most memorable releases, the band have constantly toyed with new sounds and concepts; they attribute their success to the way they view their music, and the industry as it stands. “Trends come and go, we don’t buy into them. We are true to ourselves.”

Fair point. In the duration of InMe’s career, from humble beginnings to an even humbler success story, they have never compromised, and have given it their all. There’s no surprises then, that they have outlasted many of their peers from the days of nu-metal, and remained memorable. “A lot of bands from our heyday haven’t lasted. Maybe music wasn’t in their blood as much as us. I wouldn’t be happy looking at it like a 9-til-5 job. I guess we’re stubborn,” Dave laughs. Staying power is not something that can be taught to an artist, and both band members seem to grasp this, and view their new album, lineup and fresh sounds for 2012 as a new beginning of sorts. “It was good to start again, as you could say we had too much too young. But artists come and go, and we’ve stuck it out. We’re not part of a fleeting trend, our music is constantly changing.”

As you may or may not know, PledgeMusic, at first a very small, and almost underground movement of music sharing, now hugely successful and often utilised, is a way that bands can sell music to fans, with artists then able to give special, often unobtainable content to their listeners as a reward. Alongside this, artists are also able to donate their proceeds to charity, something InMe felt passionately about during their own Pledge campaign (which we feel is very important to mention) to fund ‘The Pride’; they raised money to contribute to the Alzheimer’s Society. “It’s amazing to be involved in something for charity, especially when something we’ve created can help other people.” With changes like this to the industry, often smaller, local bands are left out in the cold, however Pledge is ideal for bands with a large fanbase to gather funds and perfect new material. InMe see it the same way. “The music industry is changing, y’know with downloading, bands don’t make record sales and in the recession, its harder on the circuit. But Pledge is good for people trying to do something properly as a band, and it gives us the means to give something to the fans who have stayed with us.” Well deserved, lads.