The phrase “seen and done it all” may be thrown around in this industry as liberally as plastic weaponry at a Turisas gig but, when it comes to this illustrious Iowa sticksman, it fits like a perfectly moulded horror mask. Yet, in spite of having packed several rock ‘n’ roll lives into the past 15 years, the pint-sized workaholic is still seeking out the new and, with the debut album of his latest project Scar The Martyr just poking its feral head over the horizon, we got the chance to find out what it is that motivates the much-loved rhythm master. 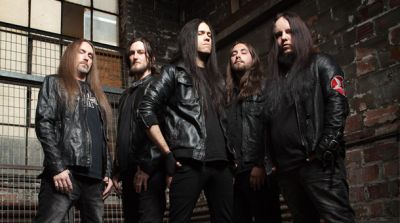 “This is the easiest band I have ever been in”

Jordison has one of the most remarkable work ethics we’ve ever heard of so we were desperate to know what inspired the creation of his new band. “Well, it was about a year or so ago,” he tells us. “I was accumulating songs and I decided I wanted to record some demos, but I wanted to record them properly. So I went to the studio where we (Slipknot) recorded ‘All Hope Is Gone’ and I recorded like 14 demos.”

It’s clear that Slipknot’s number 1 is a man permanently in need of something to occupy his energies, and this it seems was at the core of the new album’s creation, as he says: “I had time, so I went out and started seeking producers, and I eventually landed on Rhys Fulber (Front Line Assembly, Delerium). It was about a year and a half ago that we started cutting the record. It’s been a great journey right from those first days in the studio up to now.”

Featuring former members of Strapping Young Lad, Nine Inch Nails and Darkest Hour, Scar The Martyr are something of a supergroup, that is with the exception of the relatively unknown vocalist Henry Derek. “We hit it off with Henry right away. We have a great chemistry, actually. I was really searching for someone who could perform and sing well, but also someone people hadn’t heard of; someone really unique. I sent him about eight demos and within the space of a weekend he sent me back like four songs. He had every characteristic that I was looking for. As soon I heard his recording of ‘Dark Ages’, that track, it couldn’t have been better. As soon as I heard the chorus on that I was like ‘that’s it, game over’. It was then that I actually started really taking it seriously and booked the time to record the album properly.”

The closing track on the album ‘Last Night On Earth’ is a huge favourite of ours so we were keen to find out a little more regarding its composition. “Man, if I had to save one track off that record that would probably be the one. I was in a pretty dark mood around that time and that song just kind of came out of me. The whole track follows this pattern of digging yourself out of a hole, so when we hit the bridge the tone changes. We play that song live, but we can only play at the end of the set because once you hit that song, that’s it we’re done.”

Going from touring with everyone’s favourite monstrous nine-piece to travelling with a much smaller group of musicians Joey has assembled himself must be a vastly different experience, so we queried how he was finding the new dynamic. “This is the easiest band I have ever been in. I wasn’t only auditioning people for how good they were on their instruments, but also on how much I felt I truly got on with them as people. So not only are they all superb masters of their instruments and their craft, but we also genuinely get on with each other.”

As a man who has pretty much seen and done all there is to do (for real…) in the rock world, we ask how this new project is pushing Jordison in new ways and bringing new challenges. “These songs are really delicate, if you change the BPM even a little then it sounds like s**t. I wasn’t trying to be too heavy, or demonic, it was all in service to each and every song. With Slipknot we can’t be restricted by a click track because we’re f**king crazy. But here I wanted the songs to have a classic rock feel but layer it with heavy riffs. I really wrote for the better of the songs. This is also the first time where I took out a lot of the flashy drum parts and I realised that it’s okay to sit back and just let the guitar crush.”

Still in his 30s, Joey is hardly an old man of the rock scene, but with so much experience we were keen to find out how he feels he has changed as a person throughout his career. “You know, it’s been an amazing, amazing journey dude,” he begins. “Things are even more exciting now than when Slipknot first came out. When we first came out it happened so fast we didn’t have time to enjoy it. We went out and played Ozzfest and next thing you know we’re headlining Brixton Academy. I wouldn’t trade it for the world though, you know? Slipknot’s my baby and I love it more than anything, but it feels great to be able to enjoy everything now.”

Desperate to find out the always working individual’s secret to boundless motivation we queried what it is that makes him tick, and gets him out of bed in the morning. “These days honestly, what gets me up is just life in general. I’ve been through so much stuff in my life to be pi**ed about, but I’m not a pi**ed off person anymore. I thrive on dark s**t but I just enjoy life. I know how to get myself into that headspace though. Once I’m locked into my instruments, they’re like a part of my soul, and it’s cool because I know that no matter how dark or f****d up I get with my music, I know it’s a lot better there than anywhere else.”

Scar The Martyr’s debut album is a stunning snarling beast of a record that we at Soundsphere magazine gave a very fond thumbs up in our recent review. Now all we need is to check the band out on tour so we can see the great man and his new band of brothers in action properly.

Check out Dom Smith’s audio chat with Joey below…