King 810’s ‘la petit mort or a conversation with god’ is the most affecting record I’ve heard in an age. It’s raw, honest and very powerful. Honestly, it’s a record that no matter what you’re into, you can “feel” something for. I jumped at the chance to send a few questions to David Gunn recently, to get a feel for some of the tracks on the record, as well as David’s own personal inspirations and interests. 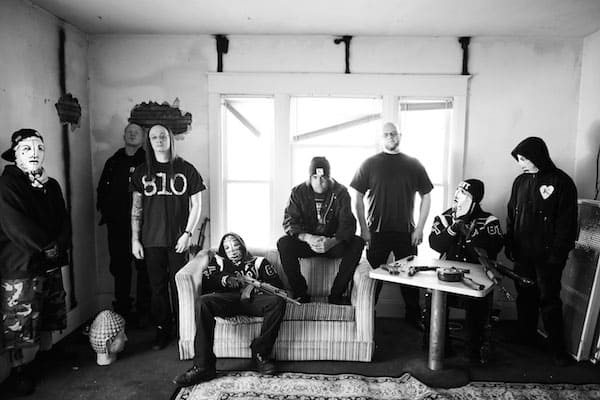 Firstly, I haven’t had a record affect me this much as a listener in the last few years, I don’t pretend to have been through, or understand the struggles you’ve had, but it sent shivers down my spine from start to finish – what were the biggest challenges in building this record?

Knowing things more in depth than any listener could know presents the challenge I imagine a director has when creating a film and knowing the story, its characters, the plot, the twists and the ending, etc and still having to develop characters within that and lead an audience, make them tense or make them cheer for a certain character. I imagine this is something similar. But to impress ourselves would be the biggest challenge I think possible. Of course there’s always the impossible challenge – something I’ve always said is impossible is no matter how skilled a writer I am, I can never make you truly understand the experiences as well as someone who has lived them. That to me is the impossibility, because it is dependent on one’s own experiences and I cannot manipulate that in any way.

If someone has had similar experiences in other places outside of where we grew up and these were places similar in nature to our hometown, that would help their level of understanding and the degree to which they emotionally respond to the songs, but this is completely out of my control.

And some of the highlights of the recording process on the whole?

The whole process is a highlight. Making a record is much more enjoyable than say, something like playing a show or touring or doing these interviews or what have you.  So that is the preferred activity amongst all these bullshit fools errands.

There are some amazing moments featuring electronic elements, strings and even blues instrumentation on this record – is having that diversity within your sound central to what you’re trying to achieve with King 810?

There is diversity in the human condition. In us as people in our lives. I would like someone to show me a human that has one mood, one tone of voice, one facial expression, one activity that they do their whole lives without exception. It is not even possible to finish a sentence without displaying nuances in speech, in mannerisms and non verbal language, in stigma and connotation, etc. That being said, it’s just a necessity. I think you’re a shitty one-sided artist if you convey one feeling every song from an album’s first track to its last and then on all other albums. That doesn’t make any sense to me, so back to your previous question, the challenge is for us and by us, to be able to articulate love, as well as hate or happiness, as well as sadness, etc.  This is part of being a well-rounded artist, of which there are few to none.

Talk to me about the specific experiences that led to the creation behind two of the album tracks, ‘The Trauma Model’ and ‘Life’s Not Enough’?

‘Life’s Not Enough’ is about the desensitisation of the human condition with the onset of the technological age. The idea that we are so sensory overloaded and so overstimulated by this style of life, that we have an immunity to a lot of things that we should otherwise care or at least feel a certain way about. The title of the song sums up encounters with nature and spirituality and man-made masterpieces and wonders of nature, yet still being unsatisfied. That is the idea in which life just isn’t enough to keep us as people entertained. Sadly enough, most people don’t bother even with these experiences mentioned in the work, most will just type it into a search engine, read a Wikipedia page, become an instant armchair expert in 30 seconds and parade around the internet, which is the fake reality parroting off their newly forged outlook among a conversation of other morons or “experts” or what have you.

‘The Trauma Model’ is about me and a friend who is long gone. When we were kids.

One of the things I enjoy most about King’s music is the emotion and the sheer effort in the vocals, like…as a listener more than a lot of bands, I think one can really feel the emotion coming through the words and tone – can you remember the moment in time that you first found your voice, and realised what you were capable of as a vocalist?

Yes, I recall the time. Firstly I would like to mention that you have to have skills as a writer. I think this is half the battle. You need to understand ways to articulate things or your voice is no good. Your voice and delivery would be the other half of it. I could scream my head off about all of the shit I say and it would not emotionally impact you at all, you wouldn’t feel anything. So I stopped yelling. I picked through my sound and removed all the habits. Removed all of the traces I could find of another vocalist or another group in my own voice, and deleted them for good. I was then left with my own voice and my writing talent that I have been working on for a couple of decades. After that it was built from the ground up, based around my own voice. This is where other groups as you mention fail. They use a preconceived notion about vocal performance. Sing on the verse, scream on the chorus, or the other way around, or scream the whole time.  On top of being shitty writers, they also have events and themes in their music that are just borrowed from other groups whom they admire.  We don’t have that and that is one thing that people have a problem with with us. That it’s “talking vocals” or that “the song isn’t heavy” or this or that. Which is fine too.

What’s inspiring you most right now, outside of music – think movies, people and places?

Music is the absolute least inspiring thing I can think of in life.  For example, next to me is a bookshelf. On it there are magazines. There is a magazine within eyesight called ‘W’, this has a picture of Rihanna on it.  The contents of this magazine inspire me more than music I can dream up and name off-hand, it just isn’t there, so when looking for inspiration, it’s everything in life. It’s everything around you really. Everybody has it but their observational skills are not there. This is of several people who have all been through the same thing – some can entertain you with it or tell it in a captivating way and some not at all.  It reminds me of the movie, ‘The Prestige’ with the difference of showmanship.  We are clearly the Christian Bales, while other more successful groups are the Hugh Jackmans as far as the presentation is concerned.

How do you look back at the success of ‘Memoirs Of A Murderer’ now, a few years on?

I look back on the success and call it a failure.

To what extent would you say that King 810 is a form of catharsis to you, and to the rest of the band?

To not much of a quantifiable extent at all.

How would you like to be remembered, as an artist and as a person?

I don’t care much about being remembered at all.  That’s kind of ignorant.

What are some plans that you can tell us about for the rest of the year?

I was going to Haiti soon, I hope none of this music shit gets in the way.