Hailed as leaders in the “New Wave of American Heavy Metal”, Lamb Of God are back and Soundspheremag just couldn’t wait to talk to the Virginia metallers in preparation for the release of their highly anticipated seventh offering, ‘Resolution’ due in January. Guitarist Mark Morton chatted to us about the new album, writing new material and the 2012 UK tour. 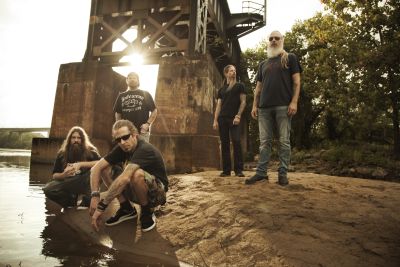 “‘Resolution’ is a very complex record”

Haven’t Lamb Of God done well! In a genre where only the best and most hard-hitting acts survive, the five-piece group is still at the top of its game after a staggering 18 years together. The ever-dedicated Morton is keen to explain that inspiration for new material always comes easily when you are around such professional and driven people, “It’s what we do; we’re musicians. I haven’t stopped writing now, just because we’re putting out a new record. Usually, by the time we get together as a band and actually construct new songs, Willie [Adler, guitars] and myself have plenty of material to sort through and it’s really just a matter of prioritising which stuff we want to work on.” With Grammy nominations, six albums and over two million sales in the US alone, it is absolutely clear to the act’s legions of followers that this attitude to working hasn’t failed them at all. Every artist’s song-writing process is different of course, and if you’ve been on the music scene for as long as Lamb of God have, then, through proper hard graft you get to know what yields the best results: “In terms of our music, I’m very fortunate that I’ve been creating it for a long time and have been able to set myself up with a little jam room that’s on my property, and it’s really my oasis for creating stuff and then I can take it to the group.”

Having a place to be away from distractions and to focus solely on potential songs either alone or with other band members has contributed to the forthcoming album being reflected on as “introspective” by various band members in the past. In terms of the lyrics and the emotion that’s embedded inside them, Morton agrees entirely. “Lyrically, the things I’m writing about tend to have to do with personal situations, relationships and people that are a big part of my life or things that I have gone through with family, friends or acquaintances.” Morton concludes however that in the end, and when considering the new material, he will always encourage the listener to “make a song their own” by making an independent decison as to what it is about.

A prime example of the progressive sonic direction ‘Resolution’ goes in for those interested is the colossal closing track ‘King Me’ (this publication’s personal favourite tune off the disk), a song comprising of operatic choirs and strings that still maintains a sound true to the legacy of Lamb Of God. “It was a song that Willie brought in initially and he had a sketch for it, but it really went through a lot of different phases,” Morton recalls. “Willie wrote and re-wrote that song probably two or three times before we got it to the point where we all felt it was everything it should be.” When the lyrical process was over, ideas from the album producer and mixer Josh Wilbur [he’s worked with everyone from LCD Soundsystem to Limp Bizkit via Avenged Sevenfold – ed] were thrown into the mix: “Josh came up with the idea to add the operatic-style vocals and the string arrangements which was really something we hadn’t anticipated doing but that really took it to another level.”

Another welcome addition to the record is ‘Barbarosa’, (aptly named after their Virginia recording studio for ‘Resolution’) and this one is a product of the band’s time within a more serene setting following relentless touring in America with Metallica and Ozzy Osbourne alongside a worldwide headline tour for the last album ‘Wrath’ which took the better part of two years to complete. ‘Barbarosa’ clearly demonstrates the album’s overwhelming musical intelligence and ability. “I think this is a very complex record.” Morton highlights, “It’s got 14 tracks on it and it really goes to a lot of different places musically. It’s not the kind of album where you can just boil it down to one song that stands out,” he adds. “You might have been able to do that in times past where we had a particular song that included every element of the record in it but with this one there’s really not one stand alone moment.”

Being an integral part inside one of metal’s hardest working bands for over a decade has obviously taken its toll both mentally and physically on the members; but for Morton at least, it is still his family and at home where he finds strength to keep on improving year after year. “My family are the most important thing in my life. They are quite simply the one thing that keeps me motivated to do anything and wake up in the morning.” And with family and friends being of course long-time Lamb Of God fans, their approval means everything: “My wife may indeed be my toughest critic, and she’s pretty stoked about the new record so that a good sign to me!”

Things are indeed looking positive for the global team of supporters behind Lamb Of God who feel like they bond with the band every time they step into a pit. What followers reading in the UK may not know however, is that Mark Morton and his band support Victory Junction, a US charitable organisation and camp based in North Carolina for chronically ill children. It is a cause very close to Lamb Of God’s collective heart and so worth spotlighting at an international level: “I would encourage anyone to check out what they are doing. I know it’s far away from England but the work they are doing is absolutely inspirational,” Morton explains. “People spend their lives putting something like this charity together and it puts everything in perspective for me. Here I am talking about releasing a heavy metal record and there are people that are reaching out to chronically ill and terminally ill kids everyday and making their lives better; that’s just astonishing to me. It’s a privilege for me to be in this position.”

Keeping the mood upbeat and prompted by our question about a UK tour to end the chat, Morton confirms that a country-wide trek will go ahead in 2012 and that an official announcement will be made soon with more details. In the meantime though, Lamb Of God supporters should continue to expect an intense live show that will no-doubt live up to the great standard and reputation this band has long worked towards. Still revelling in the opportunity to tour with their music, Morton reassures us, “In the context of a long tour, performing live is the best part of our day no matter where we are; that has never changed.”

For more information visit the official Lamb Of God website.