In our latest interview, we catch up with Less Than Jake’s Buddy Schaub for an honest interview about a range of things, at Belgium’s Groezrock Festival in 2013. 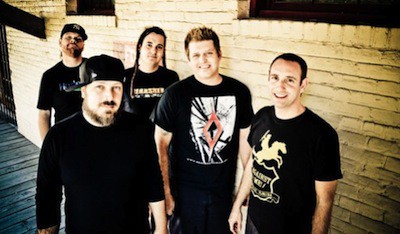 S] Hello! Could you start by introducing yourself?

B] “Hi, I’m Buddy! I play trombone in the band Less Than Jake, and I jump around like a weird monkey.”

Have you just arrived at Groezrock?

B] “I think we pulled in at around ten this morning, so yeah. We were at Monster Bash, a German festival right before this one, so we missed the first day, but now we’re here on the stinky final day.”

S] Do you think you’ll get chance to check out many bands today?

B] “I already saw The Dopamines and some of Smoke Or Fire, then I had to go and get more coffee. Now I’m doing this, or I’d be watching The Flatliners right now. I need to look at the bigger list because all I know is what’s happening on our stage though. There’s gotta be somebody I want to see.”

S] How do European festivals such as this one compare to other festivals elsewhere in the world to play?

B] “As far as European festivals go, they’re all comparable within each other. There’s always a huge tent, it’s kinda like a huge circus set up in the middle of nowhere. Festivals all over the world are kinda similar though, we played Fuji Rock in Japan, that’s a huge thing set up with a bunch of tents and a bunch of Japanese people instead of Belgian people. I really like playing the festivals though, it’s usually a shorter set for us too, it’s usually forty minutes and we have to cram it in. We just start to get warmed up and then it’s over. You really have to give it your all for the whole thing. People are always excited to be there, they’re usually wasted and having a good time.”

S] What’s it like as a band if you’ve got a new release to promote during festival season when all the crowds want to hear the ‘hits’?

B] “We’ve always been a band that doesn’t really play all of our new songs anyway. We’ve been a band for twenty years so we have so many songs anyway, so we kinda get all of the records out and say ‘we’re going to pick a couple off of each of these.’ With a forty minute set though, you always piss somebody off. When you have as many records as we do there’s always someone saying “Why didn’t you play what I wanted to hear?” so you can’t make everybody happy. You do have to put at least one new song on there though if you’re trying to promote something.”

S] What’s happening in the world of Less Than Jake with regard to new material?

B] “We did a couple of EPs that then came out as one record, on Rude Records over here. That came out over the winter, January I think, but the songs are kinda old already. We’re in the process of writing now, as soon as we fly home in May we’re starting to record at Roger’s house and we’ll do a whole new record. We’ve got fifteen songs done right now, and a cover.”

S] What can fans expect from the new album?

B] “An explosion of fantasticness! I don’t know, they can expect what they expect from us every other time I guess. It’s the same three chords with some horn parts and some good vocal melodies in there.”

S] You’re not going to surprise everyone with an experimental jazz record then?

B] “No, it’s still very Less Than Jake. What I like about it is, the last two things we did were just five song EPs that were put together, whereas this feels more like a record. We took more time cooking the songs, it wasn’t just a case of throw it together, record it and put it out. The last one was kind of an orgasm writing session whereas on this one we made love to the songs a little bit.”

S] Excellent. Will that take up quite a lot of the year then?

B] “Nope. We’re recording for the whole of May, we’ll get it mixed and mastered in June and then hopefully it’ll be out by October on Fat Wreck Chords.”

S] Can we expect to see anything of you in the UK in the near future?

B] “There are tentative plans to come back next February. I don’t know if that’s booked yet so I don’t want to start promoting it already, but the rumour mill can get started that we’re coming over.”

Do you have any plans to take any smaller, unknown bands out on tour with you at an point?

B] “Not at this point. Not really unknown bands anyway. We’re doing a week long run with Bad Fish in August. We’re doing a couple of bits in June but that’s just on our own, and in November we’re doing a Fat Wreck Chords tour. That’s going to be us, The Mad Caddies, Masked Intruder and possibly Smoke or Fire. We were talking to them earlier, so we’ll see how that goes.”

S] If someone has been living under a rock for the past fifteen to twenty years and aren’t familiar with Less Than Jake, which song from your back catalogue would you pick out as “the songs that defines the band’s sound”?

B] “Probably ‘All My Best Friends Are Metalheads’. It has a little bit of everything that we do, it’s got some rock, it’s got some ska. We have so many different sounds but that kind of blends them all into one song, for sure.”

S] Can you imagine doing a show and not playing that song?

B] “We have. There’s a few like that. People get pissed if we don’t play ‘Look What Happened’ too. If you don’t play it people yell and scream and bitch about it. We managed to do a whole tour without playing ‘Metalheads’ before, people weren’t happy.”

S] After 20 years of Less Than Jake, if you had to give one piece of advice to anyone wanting to start a band and “make it”, what would it be?

B] “Go and get your degree in medicine and become a doctor instead. There’s too many bands, you’re not going to make it, and if you do make it you’re not going to make any money because nobody buys records anymore. Just hang it up now, the fantasy is over. Don’t be in a band. It’s too late, you missed your window. I used to have good advice, but now that is actually my advice for anyone who wants to be in a band. Go an do something useful.”

S] What would you be doing if you weren’t in a band?

B] “I’d probably be in a band. I do have a degree in psychology, maybe I would have used that. I’m using that by being in a band. I try to keep the eight people I travel around with all the time sane.”

S] Finally, do you have anything else you’d like to add for anyone reading this?

B] “Stop reading about bands and do something useful! Quit wasting your lives!”