Before legendary ska-punk band, Less Than Jake rocked the Macbeth Footwear stage at Slam Dunk Leeds on May 24th, Chris and Roger took the time to have a short chat with us about some of their favourite places to play in the UK, the songwriting process and some future plans for Less Than Jake. 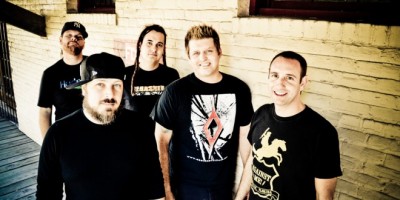 S] Hi guys!  How’s the day at Slam Dunk been going so far?

C] “I woke up in a panic, I had to find the toilet and ever since then it’s been downhill.”

C] But now we’re talking to you and it just got better.

S] What are some of your favorite places to play in the UK?

C] “How long have you got? We love everywhere we play. Leeds, Manchester, Birmingham.”

R] “We have a lot of fun pretty much everywhere. We’ve had great shows in Cardiff, that’s a cool place to play.”

S] Do you find that there’s a difference between US fans and UK fans?

C] “You see people doing stuff at shows over here that they’re not really doing back in the States.”

R] “I think over here there is a certain passion for the live interaction. Seeing a band has a bit more of a built in importance I think to people over here than it does in the states. In the states I think people are more likely to sit at home and watch a band that they like on Youtube and download their stuff and stay in their apartment than to go out and actually dance around and see the band and interact with them and have that energy transference and that memory. I will say that feels a little different. You guys are more into it over here because the festival culture has been around longer and that’s just the way it is.”

S] What is the songwriting process like for you? Do you have a particular format that you follow?

C] “Yeah, pretty much steal what we can and then the rest we plagiarise.” [laughs]

R] “Yeah our band is crazy, we do stuff in all different ways. Sometimes some songs start with a set of lyrics and an idea for a melody line. Sometimes the song can start with some chord progression, a guitar riff that Chris or I thought of and then we write lyrics to that later.”

C] “Sometimes Roger or I will come in with a song that’s three quarters of the music and the melody’s done, it’s pretty much a song. Then  we’ll work on lyrics and build the song from there.”

R] “For us there’s not really many rules for that kind of thing. I’ve had songs that I’ve started with a drum beat and been like, ‘This is a cool drum beat and I want to write a song that goes like this’, so it just depends. You’ve got to be creative in all those angles.

S] Have you got anything outside of music that influences you personally?

R] “Yeah, Curious George has been my most recent influence. It’s very good spiritually and I’ve learned a lot about myself watching Curious George.”

C] “I’m always reading. My favorite thing to read is music and rock biographies and things.”

R] “Yeah we’re pretty submersed in music. There’s not really anything I do that’s not music related.”

S] What are your plans for the rest of the summer?

R] “Yeah we’re going to play some more shows and hang out. We have some things in the works for after summer.”

C] “Canadian tour in the fall.”

R] “We’ll play some more shows and maybe work on some recordings. Whatever feels good. If you want us to come play a private party and you’re going to pay us £50,000 to fly over, we’ll f**king come do that [Laughing].”

C] “Probably won’t happen, but if they can get up enough funds then we’ll come do that.”