The Bard once queried “What’s in a name?” and that’s an appropriate question to ponder with regard to Matthew Paul Miller, better known by his stage and Hebrew name Matisyahu. From his first album, ‘Shake Off the Dust… Arise’ (2004) to his latest effort, ‘Spark Seeker’ the beat-box, reggae, dub, rap, R’n’B artist has gone through a remarkable evolution on both a musical and a spiritual level. 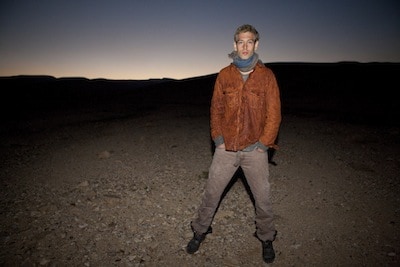 “Look for me through the wind and rain

This arc of development became our first focus when we first sat down for a chat with the Jewish-American singer and activist. “I’ve gone through many changes,” he explains. “Last year I went through a major transition and freed myself from a lot of the religion and its laws. It’s hard, but it’s an evolution.” This growth is nowhere more evident than in Matisyahu’s lyrics themselves. Of course, we wanted to know if he could illuminate any of his songwriting processes for us, and how they may have changed since his breakthrough hits ‘King Without a Crown’ and ‘Jerusalem’, through to his more recent singles such as the infectiously optimistic ‘Sunshine’.

“Jerusalem, if I forget you,

fire not gonna come from me tongue.

Jerusalem, if I forget you,

let my right hand forget what it’s supposed to do.”

“’King Without a Crown’ was really the first song that I wrote,” Matisyahu tells us with characteristic openness. “An artist’s first song is the culmination of their whole life up to that point. I was looking for my own identity and I was also becoming religious. I was submitting myself to this higher law, to this lifestyle, but also to a life which is based on the search for God within and without.” Matisyahu has shared what can be described as a passionate antagonism with strict religious faith, and his decision to shave his lustrous beard set the Jewish blogosphere afire in June of last year. But, throughout the myriad shifts his career has taken, the search for a higher level of spiritual truth and understanding has always been a driving force.

“Your silence kills me;

I wouldn’t have it any other way.”

The facial hair-deprived appearance was at a show promoting the hit single ‘Sunshine’, a track which crackles with positivity. This optimism is no mistake either as Matisyahu explains: “I don’t remember what I was thinking exactly when I wrote the lyrics, but it’s an idea. It’s about letting go of things that tie you down, allowing yourself to feel good and letting the sun shine through.” What is at stake for Matisyahu is nothing less than transcendence, and a crucial message in his lyrics always seems to be that the kind of transcendence he talks, raps, and sings of is something which will only come if the individual is open to it. In order to see we must first open our eyes and hearts, and to let the world in.

“I’m on a Jeep at twilight,

With my night vision on

To find the song of my people

It is this Taoist idea of mindfulness and openness that Matisyahu focusses upon when asked where his inspiration for songs comes from. “I learn from books I read, people I also learn from. I do still find myself inspired by the prayers and the Torah, but mostly just living. Just being, and breathing, and then inspiration happens.” Inspiration also seems to come in the guise of fellow artists for Matisyahu. A rich vein of collaboration throbs throughout the creativity of his discography, and latest album ‘Spark Seeker’ is no exception. Previous collaborations have included acts as diverse as P.O.D., Infected Mushroom, and Akon, but for this album there was more to the creative alliances than simply involving “big-name” artists. “We just took a field trip to Israel,” he explains. “It wasn’t about well-known rappers. My long-time friend Daniel Zamir has been doing amazing things mixing jazz with other styles.” Matisyahu describes how, with the help of saxophonist Zamir, they were able to assemble a diverse selection of artists to work together on the album.

“So intend to sing them

What is a man with no history?”

Naturally, this lends the latest album a diversity which suits Matisyahu well. His live shows themselves can often be wildly versatile affairs depending upon the mood he is in and company he is with. Given his involvement with the Dub Trio (his band), and his proclivity for intimate acoustic shows, we were keen to know if he had a preference when it came to live performances. “It lets me tap into different styles with the Dub Trio,” he begins. “But acoustically the intimacy allows you to express those vocal subtleties that get lost with a band.” Of course, once onto the subject of live performances, we cannot resist querying when we’ll get to see him, beard or not, back on our side of the Atlantic. “I’m hoping to be invited back to the UK festivals this year and then perhaps for a European tour.” He adds though, “But I’m kind of at the mercy of your industry over there I guess.” So consider that a heads-up to any festival organisers who might be reading this.

‘When I returned to the lower garden

I saw many souls living and dead

Rushing back and forth one world to the next.”

He does, however confess to always having a little piece of the UK with him wherever his travels take him. “I was given a Liverpool FC scarf, and so I am representing that scarf wherever I am in the world, whenever it’s cold.” Matisyahu, Matthew, “gift of God”, whatever you wish to call him, and whatever phase of his evolution you should find him in, you will find an artist perched on the promontory of something he wants you to see. Perhaps with a mind as equally open as his heart you might just glimpse it too.