In our latest interview, we chat to metal legend and former Dream Theater sticksman Mike Portnoy about his new hard-hitting project Adrenaline Mob, visiting our shores and what things are inspiring him in 2012. 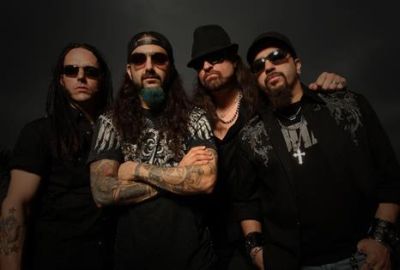 “After 25 years with Dream Theater, there are other musical tastes to explore”

S] Is there anywhere that you looking forward to visiting when you come over to the UK?

MP] “I think that would have to be any of the curry houses, honestly! The UK really does have the the best Indian food in the world!”

S] What were some of the most enjoyable moments for the recording and producing of ‘Omerta’ – any stand-out experiences for you?

MP] “Making this album was very easy and enjoyable for us all! We tracked it at at [guitarist] Mike Orlando’s studio and then handed it over to the very talented hands of Jay Ruston [Mixer – Steel Panther/Anthrax] to mix it and help it sound as huge as it does!”

S] Mike, given your successful past, what does your work in Adrenaline Mob mean to you?

MP] “Really. It’s another musical outlet for me to branch out stylistically. Most other things I’ve done in the past were rooted in prog. But I am just as much a metal head and wanted to work with a band that was based around big riffs and bouncing grooves for a change of pace. It seems like the natural next step for me after my experience with Avenged Sevenfold.”

S] Can you talk us through ‘Undaunted’ – what inspired that track? It seems like a huge modern metal anthem in the making?

MP] “That track really is the ultimate ‘fu** you, you can’t kill me!’ anthem, and like many people, I can really relate to that!”

S] Adrenaline Mob’s style is of course, much different to that of Dream Theater’s, so what appeals to you so much, on a technical level about the music that you’re making right now with AM?

MP] “I think really, that it’s just another side of Mike Portnoy. I love Black Sabbath, Van Halen and Pantera just as much as I love Rush & Genesis. After 25 years of Dream Theater, there are other musical tastes I want to explore.”

S] You scored a Top 5 hit in the Billboard Rock charts – how does that make you feel, given that this is a new-ish venture?

MP] “That was very surprising, yes. Even though Adrenaline Mob’s individual members has had varying success with our previous bands – hell, John Moyer has had four number one albums in a row in the US with Disturbed, Adrenaline Mob is still a completely new ‘brand name’ and is essentially starting over and building from scratch.” 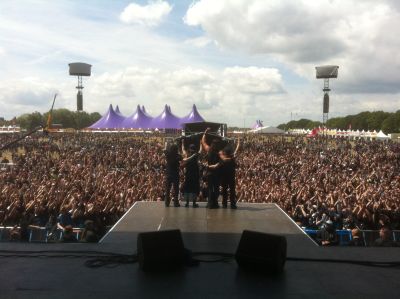 S] You were worried about Dream Theater fans’ perception of Adrenaline Mob, how has the Euro crowd taken to the sound so far?

MP] “From the on-set it was important for me to make sure new listeners understood just because me and Russell Allen [vocals, Symphony X/Adrenaline Mob] have teamed up, people should not expect this to sound like Dream Theater-meets-Symphony X, because this is an entirely different animal! Now that people know this, and accept Adrenaline Mob for what we are, the reaction has been outstanding! So far, the reaction at these first European shows has been truly electric! There is an energy and vibe in the air that I haven’t felt since DT’s first European club tour in 1993!”

MP] “As much of a workaholic as I am. I also am a sleep-a-holic! So, I usually sleep until about 1pm and then spend most of the day and evening doing interviews or on the internet dealing with my e-mail business or dealing with my social networks. Juggling five or six different bands or projects at the same time is insane! At the same time I try to get family time in and then around midnight settle down with a movie or some TV before I crash around 4am. Of course, when I’m on the road or in the studio my schedule is different.”

S] A slightly random question now, you pay homage to a great British synth-pop band, Duran Duran on your cover of ‘Come Undone’ with Lzzy Hale of Halestorm – are there any other surprising British bands that you’d like to cover with this band in the future?

MP] “Who knows, I guess we will see? We’ll see. Currently we’ve also covered Badlands, Dio, Rainbow and Black Sabbath in our live set as well!”

S] Outside of music what things are inspiring you right now – are there specific people, or places, for example?

MP] “In film and tv, I get inspired by Paul Thomas Anderson, Quentin Tarantino, Gasper Noe, Darren Aronofsky. In terms of film stuff, I like ‘Sons Of Anarchy’, ‘Breaking Bad’ and ‘Mad Men’.”