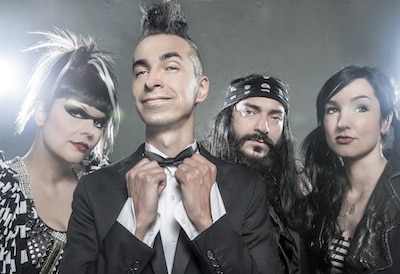 MSI is coming to the UK pretty soon, what are some of your favorite things about coming here?

You guys recently put out your new album through Kickstarter. What made you decide to use Kickstarter to fund the new record?

J] “For us it was all about cutting out the middle-man. There’s so many middle-men in the music industry so any way to cut them out is really interesting to us. We heard about Kickstarter and started looking into it and we thought that we could go straight from us to the fans. We’re like a little shop that everyone likes, we’re not a huge franchise like a McDonald’s or a Kanye West. So it was good to be able to have that pop-up shop feel where we’re in charge of everything, you’re giving us money and we’re using it to manufacture the record and ship it to your house. Nobody’s giving us money for free, they’re giving us money for products and I think that worked out pretty well. It’s definitely cool to see the reaction. Everybody else does it in such an ‘ass-kissey’ way. 95 per cent of bands kiss your ass and kiss the radio’s ass but we’re going to tell you the truth, we’re making a record and if you don’t give us the money you don’t get the record. That’s the way it should be.”

S] How do you look back on the success of Mindless Self Indulgence and yourself as a musician?

J] “I grew up with cult movies like ‘Rocky Horror Picture Show’ and cult records and weird comic books so when I made the band I thought ‘this is going to be the biggest thing in the world’. And then it became this weird cult thing, I didn’t plan it. I just thought that people would perceive this ‘go-f**k-yourself’ style as the future. But when I look back at it, it all makes sense. Of course it would be this cult thing, I grew up with the cult influence. Now it makes sense when I look back 20 years later, but when you’re doing it, you’re just throwing stuff together. When you get to fifteen years later you’re like ‘wow I never stopped moving until last year’.”

S] You guys have your own comic and you did sounds for a video game a while ago. Do those kind of things inspire you or are you still inspired by cult stuff and comic books. How has it changed throughout the years?

J] “My influences are less music and more movies and comic books. I’m totally influenced by that and it’s even worse now. I’ll find some old cult movie, watch it and it makes me want to write a song. It’s very rare that it’s music. It’s not as enjoyable as finding an old movie that I’ve missed from the eighties that I never heard about. That is much more fun for me and more influential. If I turn the radio on, it’s more like work for me. It becomes business, it very rarely is fun for me.”

S] On the track, ‘It Gets Worse’ you address a lot of things. What were your inspirations for that?

J] “That’s my favourite track on the record. It’s about…if you’re getting bullied in high school or online, and you can’t deal with it – how are you going to deal with it in real life? You need to grow a thicker skin and figure out your character, it’s not going to get better, it’s going to get worse. The chances of you becoming a rich and famous person are slim compared to you working in a cubicle, marrying someone you hate, or getting a disease that kills you. Sh** gets bad and it’s not going to get better. If you think that someone calling you a slut in school is the worst thing that’s ever happened to you. Wait until you get out in the real world. Try getting bullied in the 80s and 90s when it wasn’t the internet, it was in your face. It’s ridiculous that people are taking it so seriously. Here in America it’s like a witch hunt when people call ‘bullying’, if you’re just speaking your mind on the internet and say you don’t like someone, that’s not bullying.”