Monster Magnet’s Dave Wyndorf got talking about his band’s new album ‘Milking the Stars’, a reimagining of their ‘Last Patrol’ album, as well as what inspires him and how he has changed as a musician over the years. 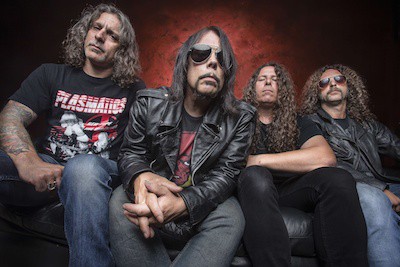 S] Where did the idea for ‘Milking the Stars’ come from?

D] “It came from not being able to leave anything alone. There’s little avenues that I can explore with music to give it a different vibe, just to see for myself how it would work out. I started recently making records very very close to home so I had to go in and out of the studio in between tours and stuff. I thought, ‘If this is going to be the new way, I’m going to do whatever the hell I want.’ I pretty much treat my recording career as a series of experiments for me and for the listener, with a lot less concern to what would make sense commercially. Is it worth it? That’s up to the people who either like the record or not like it. In the end, what I want out there in the world is a lot of Monster Magnet music coming from different angles that people can discover over the years.”

S] Have you got a favourite reimagining?

D] “My favourite was ‘Let The Circus Burn’. I looped a 30 second or 40 second drum loop from the song ‘Last Patrol’ for six minutes, played on top of it a guitar part and an organ part that set out the whole structure of the song. It was all made kind of on the spot according to the drum loop and came together really really quickly. Like, ‘OK, let me add another guitar,’ ‘OK, let’s get full on bass’ and ‘let’s do that.’ These ideas kept popping up. That’s my favourite because it happened so fast.”

S] Can you talk about the lyrical inspiration for ‘The Duke’?

D] “I wrote the music first. [Lyrically] To me it was like, ‘I’ve got to write something sensational for this.’ But I always have to go back into my own life to write. I can’t just make up like movie scripts. The thing was so long and so rock and I just kept thinking about a couple of things people said to me. ‘Rock is dead.’ ‘It’s all over and the hipsters have taken over.’ It turned out to be some weird revenge song of me living in outer space, then coming out and annihilating all the non-believers with a nuclear bomb. It’s not poetry but it suited the song so well so I was like “obviously, this is it. I’m going for broke and everyone dies.”

S] How do you look back on the success of tracks like ‘Space Lord’, ‘Power Trip’ and that period of time?

D] “It was really cool. Stereotypical rock success with the old school record system in place. Then radio success with a song that wasn’t even written for the radio. Frankly I was really surprised that we were in the charts with a song called ‘Space Lord’ that sounded kind of like Hawkwind and The Stooges. I just thought the whole thing was truly truly bizarre and very cool. I kept my eyes wide open the whole time just to take it all in because I knew it wouldn’t last. So I just drank up, put on leather pants, spent a lot of money running around on airplanes and tour buses, had enough sex for 50 men. The stuff that you want when you’re 17, when you’re presented with that stuff in your 30s you tend to go completely berserk. Then I overdid it but I think that’s what you’re supposed to do. It’s all a matter of checking out experience, seeing what you learn from it and then trying something else.”

S] How do you feel you’ve changed since your career started to now?

D] “The obvious thing is I get older. I’m not a young man so everything changes when you see things through those eyes. It’s like, ‘What can I get away with?’ Believe me, if I could get away with being 20 I’d probably go back and get in the leather pants again. But the thing that changed mostly for the better is that I’m more into it now for the music’s sake. I don’t have to pay quite as much attention to image as I used to do. Videos aren’t as important. I’m not looking to top any sales charts anywhere. I’m not looking to compete with radio bands, which is what I was forced to do. When you’re on a major you have to compete in some way. That doesn’t bother me any more. Everything is about the next project, about the music, about the sound.”

S] You’ve had that excess lifestyle so now you’re focussing on writing and love of the music.

D] “It was always there but it definitely got interrupted with these bouts of physical adventure and social adventure, which you have to do. I wanted to embrace it as much as I possibly could and I did but it does take away from the overwhelming focus that you need to make really really interesting, esoteric records. I still made records. Some good. Some bad. But they weren’t truly as original and honest from myself.”

S] People can see your example and say “it’s good to experience stuff so long as you have the love as well.”

D] “Oh yeah, music is everything to me. For some reason, audio is more important to me now in this age of video than it ever has been. There seems to be this snowstorm of visuals out there in the world, which is really cool and all I ever hoped for when I was a kid, but I get overloaded and I wind up closing my eyes a lot and just listening. I haven’t been served up anything visually, musically and everything all on one plate and been satisfied without having some sort of interaction with it in my mind.”

S] What are the things outside of music that inspire you?

D] “I love what’s going on in art and comic books. I always have. Now the art in comic books, it’s not better than it used to be but the production is fantastic. There’s all kinds of illustrators out there doing really fantastic stuff in a world where, commercially, they have turned their back on illustration. So comic books and semi-fine art are the only places where people get to illustrate freely and all the time. It’s such an individual medium where just one person or two people are involved in it. That really inspires me. I read a lot of books. Writing does it. Creation just seems to fuel more creation. I love to see a good job get done. I love to see stuff come in that’s off the wall. That’s why I’m disappointed in the mainstream now because the mainstream just doesn’t even allow anything interesting to come in any more. But TV is good. There’s really good writing and really good ideas out there. I wish rock and roll was as cool as TV right now but maybe that’s the way it’s supposed to be.”

S] What books do you recommend and what TV shows do you watch?

D] “Comedy is king. I love Eastbound and Down. Fast political comedy is really funny. I have been reading a lot of history lately, which seems like it would be dull but it’s actually not. I’m reading the history of American politics from the 1950s to the 1980s, which kind of explains a lot on how we live today. Then weird stuff like the history of the air conditioner. Little stuff like that I’ll read it and just go “life’s pretty interesting, you never know what’s going on.”

S] It comes back to that creative thing we were talking about. Creation in it’s largest form.

D] “Creating stuff is everyone’s right to do and anybody can do it to a certain extent. It’s the one thing that puts me in touch with any kind of connection to any real magic, or what anybody would consider magic. But what’s magic? ‘Oh, it’s a guy pulling a rabbit out of his hat.’ I don’t really believe in that. ‘Oh, do you believe in another dimension?’ Well, I want to but I haven’t seen any proof. What’s the closest thing to magic you ever got? Making music because you’re in it, then you start it and then it finishes itself.”

S] Have you got a favourite memory of the UK?

D] “I have a lot of great memories of the UK. But the reason I love the UK the most, and always will be, is 75 percent of my record collection was made by people who lived in the UK. And that’s it. All I have to do is enter there and I’m like “well, here’s where it all came from.”