Here at Soundsphere HQ, we’ve taken special notice of Motionless In White. Smashing onto the scene in 2010 with their major debut album ‘Creatures’, in a blaze of monster riffs and screaming madness, the band have been hard at work. Touring, making a huge impact on a worldwide fan-base and causing plenty of controversy along the way, The band’s most recent release sees their style evolving musically, away from their more generic, hardcore beginnings into heavier, industrial metal territory. So we were very excited to talk to lead singer Chris Cerulli [or err, Chris Motionless…] about inspiration, the act’s provocative style and the future for Motionless In White. 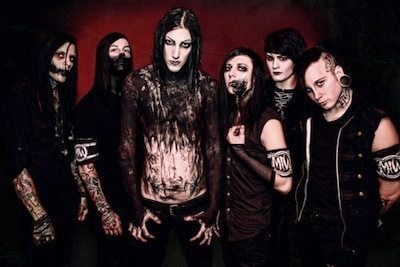 “There are always people talking sh**, and that can get you down”

We kick off with look into the band’s hard-hitting style, which has evolved from their hardcore roots, and amalgamates industrial metal, gothic horror metal and hardcore, making them one of the more innovative bands on the alternative music scene to-date. We wanted to know: was the distinct style and mix of genres intentional, or something every band member contributed to? “When we were starting out, we were experimenting to see what we could do. We had a lot of ideas, a lot of influences and things we wanted to do. I think now we know exactly what we want to do, and what we are. Everyone brings a distinct style, and a point of view to the table.” But it hasn’t been an easy journey; the band have been signed to various labels, and earned the title of hard-working by non-stop touring and writing innovative, new output. “It’s taken a while to get to where we are now, a lot of trying new things and experimenting. You have to constantly try new things, and push yourself to create new material.”

And the music itself? The sound has grown, spawned if you will, with the band from humble beginnings, to a group of driven artists with a clarity of vision that has allowed hardened critics to compare them favourably against their own influences including Marilyn Manson and Nine Inch Nails. “[This sound] is definitely what we’ve always wanted to do; we can combine all these different elements, and take inspiration from great influences, to hone in what we want to do.”

Humble they should be. As popularity has grown, and from constantly innovating, the band are known for their break from the norm. Okay, various genre tags we’ve listed aside, it’s metalcore. Sure, but the band have taken heavy and aggressive to whole new levels, and inject the proceedings with a twisted dark imagery, from their lyrics to their videos, that set the band apart from the rest.

As with any hard-working collective, collaboration is key to networking, guaranteeing a larger audience and creating new material, and Motionless In White are no exception. Their 2012 LP ‘Infamous’ was produced by swedish maestro Tim Skold, and the band also worked with Soundsphere fave Brandan Schiepatti, of Bleeding Through fame. But is collaborating something they will continue to do? “ Definitely. Collaborating is essential, it gets the best of you, it brings new ideas to the table. Within a band, even if everyone is bringing something to the table, even if your a perfectionist, it always works to get a fresh point of view. It can really help perfect your art.”

Furthermore, Chris was personally very happy to work with Tim (Skold), he says: “He has so much knowledge and is so unique in what he does, it really pushed me and Ricky [Olson, rhythm guitar] to create new stuff, completely out of our comfort zone, things we had never tried before.” We ask Chris if there is any other artists the band wish to work with in the future. “There are a few great artists on the list, one particularly I have always highly favoured, metal producer Devin Townsend [Strapping Young Lad], I love everything he has done with so many amazing artists, everything he has ever touched is golden. Even if it wasn’t working on a record, I’d love to sit in on a few sessions with him!”

The band themselves have developed quite a following. As well as their huge online fanbase, their collaborations with other artists demonstrates their popularity, and it must be a dizzying feeling gathering so much support from other artists as well as fans. “I feel extremely fortunate to get the opportunity to work with heroes of mine, and its incredibly motivating to receive that kind of support.”

Next up, we discuss social media with Chris, a topic that he’s been particularly vocal about previously. It’s easy to overlook the importance of social media, but even more so for a band starting out and trying to get their music heard. Motionless In White, like many others, relied on networking to get heard and now have a huge load of supporters. Chris reflects on its importance to a modern band. “ I can’t see how bands can continue, or even survive without social media, it has become so fundamental to promotion, and marketing. Without it, bands would receive no coverage, and then how would your music even be heard by a larger audience? Local music is still so important, but social networking is like a necessary evil. With all the support we receive and listeners who hear our stuff online, there will always be people talking sh** and that can get you down.”

Next up, we ask how has the band evolved since their beginnings, and what are their aims? Chris replies, simply: “I think we are hungrier. In the sense that we have a lot of determination, a lot of energy. We are heavily motivated to just keep doing what we love. We constantly push to progress, y’know?”

Next up we get to ask a more personal question. Oh, you know we do like to delve a little deeper here at Soundspheremag! What motivates Chris, and drives him personally? In terms of charity “I have a lot of support for charity work, I love animals and I always try to advocate support for charity, and just try to maintain a positive outlook in anything I do. And when he’s not touring? Chris states “I’m a big movie fan, so any movies I have time to watch. I am a real supporter of the arts, so whether its something intellectual or just something dumb, I watch a lot of movies when we are not touring but we are always so busy, its whenever I get time.”

So, the future? What does it hold in store for Motionless In White? The band have started the year with a few gigs, and will continue throughout the year, as well as Download and Mayhem Festival (US) later this year. So, with the success and the music ahead, what do the band look forward to? “The tours are gonna be huge, just amazing, so we are just gonna be non-stop touring”. And finally, we ask if the band have any messages for their UK fans? “Just endless thank yous to everyone who has supported us, it has really helped us, after our first tour noone knew who the fuck we were and now we have a lot of fans around the world, so thank you for that, for the support from all our UK fans.”