Once upon a time, in a land not so far away, a phone interview with Nekrogoblikon’s Scorpion took place. And now it’s online. Incompetence reigns supreme in this writer’s mind. There’s plenty of crazy, interesting things to read below, in case you have a pair of eyes. Normal eyes, that is, not the creepy red goblin eyes that the characters in the ‘No One Survives’ video seem to have no problem with. Check it out! Before you go on you should know that at no point did we find out the meaning of ‘Bears’. 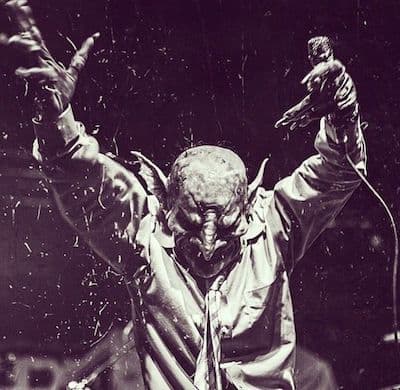 S] What do you find to be the biggest challenges? Despite your success, you’re still kind of a DIY band.

Scorpion] “Every aspect of it, we do ourselves so the hardest part is finding distro. It’s hard to get our stuff out there. I think a lot of people would like to be able to just walk into a shop and buy a copy of our music, but it just doesn’t sell that way for us, so that’s the toughest thing for us. Being independent is something we all believe in, so if we keep it that way we’re never gonna be a fifty thousand or two hundred thousand dollar band. A lot of people are like ‘You guys are too high risk,’ y’know, so it’s kind of a point of pride to succeed in spite of that.”

S] There’s a great passion of the band with that ethic, and the image you’ve created, and most of all the quality music. Is that what keeps you going?

Scorpion] “Yeah, definitely. We wouldn’t keep going if nobody gave a sh**. The music has to be at least as good as the gimmick. Now with the people in the UK are starting to hear about it thanks to Hold Tight, so now we’re even more excited to keep going.”

S] How do you look back on the success of the records leading up to your new EP?

Scorpion] “In ‘Goblin Island’ it was still just me and my friend Tim, and that’s when we got the rest of the band on board. It was all about creating the most epic, layered, intense, aggressive twisted power metal we could make. Then we started focusing more on the structure of the songs. ‘STENCH’ had a much tighter structure. The next full length we’re working on is called ‘Heavy Meta’, that’s gonna be more all over the place again, but still with structures intact. We’re trying to do a different sound for each release, so that people don’t pigeonhole us outside of the Goblin Metal aspect.”

S] We wanted to dare to ask what inspired ‘Bears’.

Scorpion] “What are you saying?”

S] Must be the Yorkshire accent that’s throwing you.

S] What stuff inspires you outside of music?

Scorpion] “That’s tough! Really a lot of it is just philosophy stuff. Meta science, pseudo philosophy. We’re all really into chanting. We do group chanting every Saturday, also we take part in our local Wicca community. We like to dress up and dance as witches, and have fights with full soda cans.”

S] What have been some of the great highlights for you guys recently?

Scorpion] “There are constant highlights. Whiskey is always one.”

Scorpion] “We don’t have anything confirmed for summer yet, but we’re probably gonna be working on ‘Heavy Meta’ a lot and recording that in April or May ready for a summer release.”

S] You guys have a great image. How important do you think image is? Do bands need that as well as the music? How important is that to you guys and the impact you have on people?

Scorpion] “It’s a mixed bag. With the days of internet and social media we’re so saturated with music that people do need some way to set themselves apart. If you don’t have a gimmick or some equivalent thing it’s gonna be a lot harder to get people to listen to your music. You have to be marketing in a way with your image. In the past when bands were signed to a big label the marketing was already done for you, because people handled that for you, but the image is never ever ever gonna be as important as the music. Just try and be unique, try and say something. With Goblin it was a happy accident, and I’m proud of how far we’ve come.”

S] We were asked to ask this one. In the event of a zombie outbreak, what weapon would you use to defend yourself?

Scorpion] “Hmmm. I’d love to have a fifty-calibre World War II style gun. It’s difficult to run out of ammo and you could mow down a lot of zombies.”