During their stint in the UK supporting Fall Out Boy and The Pretty Reckless, we chat to the members of New Politics (David Boyd [vocals], Søren Hansen [guitar] and Louis Vecchio [drums]) about their inspirations, touring the UK and more. 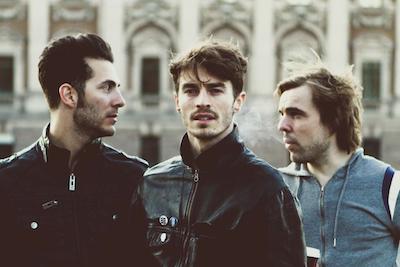 L] “It’s been awesome, man. Europe, London, it’s been a whirlwind. It’s such an amazing feeling to play in front of these giant crowds with Fall Out Boy. To actually see some people singing songs back, it’s a dream come true.”

S] For each of you, do you have a special memory that you’re going to take from this tour?

SH] “I would say meeting a very, very pretty girl at a pub… No, it would be the first show. I mean, it’s so awesome because we only play a few festivals here and there so this is our chance to really be in Europe, it’s just so cool.”

D] “I was so grateful and happy that all the fans showed up early for the first band, which was us. We played Manchester Arena, it was sold out, the show was huge, and the same day the album was released and it was like official, you know. I got a mail from my mom this morning that on Danish radio she heard the song three times.”

L] “I never would have imagined in my entire life growing up playing drums for a band, in my own band, over here, I just never would have thought that. Every day for me is a memorable moment. Especially living with two psycho Danish people who I have to see every day.”

S] At your level of success do you still get nervous? If so, how do you battle those nerves?

D] “We definitely get nervous. We’re still shitting bricks with butterflies in our stomachs and stuff. We do one thing, we all get in this circle and we sing ‘Kum Ba Ya’ – nah I’m joking, I’m going to redo that. We all stand in a circle and pick a harmony that doesn’t harmonise. Then we just slap each other and give each other high fives… No, ok, like, tap each other on the back.”

L] “Yeah, you made that sound really weird.”

D] “Then alone, I go through a phase of changing colours four times in my face, take deep breaths, and I do that like a million times until I can go out there and have fun.”

D] “I actually really have trouble sleeping; when I get offstage I’m on such a high cloud it’s so hard to come down. When I go to bed I’m sort of like “Holy-shit-what-the-fuck-is-happening!” It’s insane.”

S] Just before we finish, how do you feel you’ve developed and changed as a band since your self-titled debut?

D] “Those things are hard to explain because you’re constantly changing. I think we’ve really developed as song writers and we’ve learned a lot. We want to be the best that we can be so we always push ourselves to get better. We’re all very similar in the way that we all have our background in punk and grunge and we love just cool stuff; raw cool stuff, honest cool stuff, and I think that also shows in our music. I think one thing we have in common which really shows in our music, is our love for music. But I mean you’re always developing, and you’re partly a reflection of your imagination, your experience, and your environment. What speaks to us speaks to us. What resonates with us resonates with us.”

SH] “We just jumped into this not really knowing what we were doing and that’s the helpful thing. We were writing songs and we had this album that didn’t do too well, it kind of put us on the map, but it didn’t do anything. So we just went through this insane rollercoaster ride that when we went through it seemed like the worst thing we could possibly be doing. We didn’t understand why our songs weren’t working, and suddenly when you look back on it now, it all makes sense. It’s just a big part of why this second album became the second album.”

S] How do you look back on the success of tracks like ‘Yeah Yeah Yeah’ now?

D] “We were in a different head space when Yeah Yeah Yeah was written, so naturally it paints a different picture for us. But we really enjoy hearing that new fans are picking up the old album and just getting into those songs now. It’s very flattering. Yeah Yeah Yeah will always be one of our favourite songs to play live.”

S] What sort of locations and things outside of music are inspiring the band these days?

D] “We take inspiration from everything we can.  Living in New York is very inspirational by itself. There is so much culture and life happening right in front of you, always. Just sitting in the park watching people walk by can inspire a whole album.”

S] You guys seem fantastically happy a lot of the time, so what would you say even at your level of success, the biggest challenges for you are as a band?

D] “It’s very hard for us not to smile with all these awesome things happening for us! We deal with the same challenges as any person would. Whether its financial or women, its all the same. Travelling all the time can get challenging at times as well. We’ve become a big family on the road. Our whole crew come along with us. If anyone is down there’s always someone to help get you back up which is awesome. The last year has been unreal and we are nothing but excited and anxious to see what’s next.”

S] On that happiness, a lot of the songs, like ‘Tonight You’re Perfect’ have this really uplifting power pop sounds, is creating uplifting motivational tunes a key missions statement for New Politics?

D] “The thing that we are most happy with on this record is that all of the songs we wrote are about actual moments in our lives and those emotions we were going through. ‘Tonight You’re Perfect’ happened to be written after an incredible night out in Stockholm and was inspired by those emotions which were very happy. We just like to go with whatever we feel.”

S] You’ve toured with Pink and 30 seconds to mars as well – what would you say that the defining moment of your careers have been thus far?

D] “There are so many moments in the last year that were amazing for us. One of the many would have to be performing on the Jimmy Fallon show in NY. It was so flattering to be there looking at Fallon and The Roots just rocking out with us. It was a mind-blowing experience and we will never forget that. Our headlining tour in the States was another huge defining moment as well. We had no idea what to expect. It was our first headlining tour and it ended up almost completely selling out. Just seeing the fans sing all the songs with us was unreal. Every night on that tour was very touching for us.”