Noel Fielding is currently inside his first solo tour for five years. The comedian, who thanks to his work on The Mighty Boosh, Noel Fielding’s Luxury Comedy and Never Mind The Buzzcocks, has an enormously loyal following, is starring in a new show, simply entitled, An Evening with Noel Fielding. 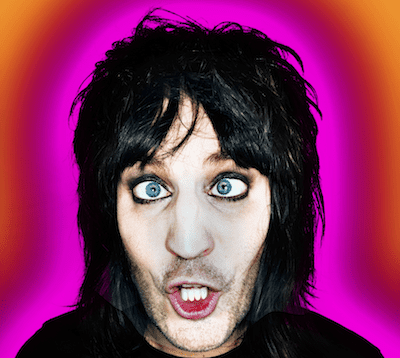 Featuring Noel’s inimitable blend of stand-up, animation, music and appearances by some of his best-loved characters, including The Moon, The Dark Side of the Moon and Fantasy Man, it’s a blinding show. As Noel himself puts it, “You’d be a fool to miss out. Come along, bring your Nan. Fancy dress optional.”

Noel and I are chatting in his north London studio. Surrounded by props – including life-size cardboard cut-outs of a robber with a stripy jumper and a swag bag and a nun wielding a huge gun – and his own arresting paintings, he makes for marvellously entertaining company. It is a delight to spend an hour in the company of this hilarious and magnetic comedian.

But don’t just take my word for it. The critics have been queuing up to praise this comedian who can be summed up by all those adjectives beginning with C: charismatic, comic, charming, compelling. The Daily Telegraph calls Noel, “A comedy wunderkind”, while The Guardian has described his work as, “A neo-psychedelic riot of mirth.” And Phil Jupitus, no less, labels him, “A Gothic George Best.”

The five years away from the live arena have only whetted Noel’s appetite for stand-up. He can’t wait to get back in front of an audience. The performer, who has spent the last few years occupied by the meticulously produced, semi-animated E4 show, Noel Fielding’s Luxury Comedy, begins by underlining that nothing beats the rush generated by live work. “The problem with TV is that it takes years to make, and after a while you can’t remember what it’s like to tell a joke and get a laugh from it.

“The great thing about live comedy is that it cuts out the middle men – all those TV producers and directors. It takes out everything that gets in the way, so it’s just you and the audience. It’s a really pure set-up.”

Because it’s so deeply original and innovative, Noel’s comedy can divide people. But he thinks that the infectious nature of his stand-up show can help to win over the agnostics. “Some people might think they’re allergic to you, but if they come to a live show and see everyone is laughing, it’s hard to say that it’s not funny. It was the same with the Boosh. Sceptics were convinced when they came to our shows.

“As a stand-up, you spend all day being nervous. But as soon as you step onto the stage and get the first laugh, it’s magic time. It’s like being in a dream. It’s a real buzz.”

Noel, who for many years has been a highly popular team captain on BBC2’s widely-loved and very long-running pop quiz, Never Mind the Buzzcocks, is also relishing the prospect of touring the country. “It’s great,” he enthuses. “You get to visit all these nice places you’ve never been to before. When you arrive at a lot of towns, you just go, ‘Wow!’”

“The first half is set in a cabaret club,” he reveals. “Then I get kidnapped from my own show, and in the second half the rest of the characters have to find me. I’ll be playing other characters during the second half. It becomes like a play. It’s a sort of farce.”

The show promises a typically uplifting variety of disparate elements. “That’s why I’ve called it ‘An Evening with Noel Fielding’, because it’s not something I’d usually do,” the comedian explains. “It’s more like something Barry Humphries would do.”

The evening will also feature music that Noel has composed with Serge Pizzorno from Kasabian and some characteristically entrancing stand-up routines. Noel, who for many years performed with his close friend Julian Barratt in The Mighty Boosh, dubbed “The funniest comedy double act in Britain” by the NME,  discloses some of the themes he will be addressing in this part of the show. “I touch on turning 40 and my Peter Pan complex. Because I’m now 40, I try to do a bleak bit, but of course it soon becomes completely fantastical. I attempt to go gritty, but I can’t help going fantasy.”

As an example, Noel says he has been working up the character of Chicken Man. “He’s like a figure from a Jodorowsky Spaghetti Western. He’s half man, half chicken. He has to fight a bandit, and he’s got Tourette’s. He’s like a cross between A Streetcar Named Desire and Foghorn Leghorn. He keeps flipping in and out of madness.”

Noel’s comedy is always richly imaginative, but can he tell if he’s gone too far? “No!” laughs the comedian, who has also acted in The IT Crowd, Nathan Barley and Garth Marenghi’s Darkplace. “Locked away in North London for years making Noel Fielding’s Luxury Comedy, we’d think, ‘Let’s do something based on William Blake’s painting, The Ghost of a Flea.’ That could be very self-indulgent.

“But it could only exist on telly. Doing stand-up, you’re edited by the audience. If you take too mad a line, you’ll lose people. But on the other hand, if something is getting big laughs, it’ll never leave the show.”

Noel, who is hopeful that he and Julian will one day find the time to make a long-planned movie, continues that, “There are certain things that you just know will work. At one point, I play a herbal tea bag. I knew that would strike a chord because everyone has tea.

“The Chicken Man was more of a gamble, but people really seem to like him. They’re also really enjoying a section where Tom plays Antonio Banderas and Michael plays Hawkeye, the living embodiment of the tennis line judge. It’s great to think up these ideas and then watch them take flight.”

The comedian attempts to sum up the style of the show. “It’s so abstract. It’s like you turn the radio dial, and something random comes on. You’re not quite sure what it is, but you warm to it.”

So what does the comic hope that audiences will take away from “An Evening with Noel Fielding”? “I hope they have a really good time,” Noel declares. “I hope they laugh their heads off. I’ve always been very concerned not to sell people short. But the only danger is that the show ends up as long as the film Gandhi!” Ever philosophical, Noel carries on that, “I suppose if it doesn’t work, I’ll have to do something else. What would I do? Breed shire horses!”

The only drawback about touring as far as Noel is concerned is that, “You’re buzzing with adrenaline when you come off stage. You have to do something with that, and it’s very hard not to go and get drunk. In the old days, we’d give the Rolling Stones a run for their money with our after-show behaviour.

“But now I’m in my forties, I have to find new ways to calm myself down. Like Mick Jagger, I’ll have to get fit. After the show, Michael and I used to go drinking. This time we’ll have to go to mazes and local markets and drink peppermint tea.”

Unable to resist one last gag, Noel concludes: “It’s the Peppermint Tea Tour. I should have called it that!”

Details of the An Evening with Noel Fielding tour can be found at http://www.mcintyre-ents.com/talent/noel-fielding/