With Payable On Death (P.O.D.) having been on the scene for over 20 years, Sonny Sandoval can be classed as a true veteran of rock ‘n’ roll. Known for his down-to-earth attitude, Sonny has not been morphed by the semi-glamorous nature of the music industry, “I’m a daddy first, and a husband as well.” 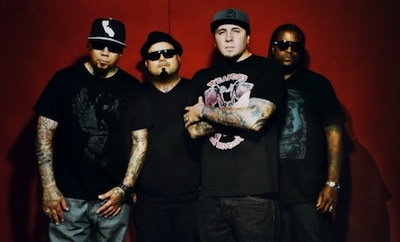 “We’re all in this for the right reasons”

However, the road has not been easy. When P.O.D. took a year-long hiatus in 2006, things looked grim. Sonny says he needed time to find himself again, “You know we’ve been in this business for 20 years, once it starts to become all business and you just become a brand from tour to tour, you kind of lose the fire a little bit.” He continues, “I do love P.O.D. so much and I wasn’t willing to put it down for good.” Yet, the guys didn’t return purely to make money, “We came back on our own terms to write music that we want to write and play the shows we want to play, so it’s good. It feels like a rebirth of sorts.”

But did this rebirth change the dynamics with the group? “It feels like we’re all in it for the right reasons. We’re playing great shows because we want to. It’s not like there are millions of dollars to be made, or any more fame, we just kind of play it because you feel like that teenage kid again, playing your music in front of that little club and the handful of people that have come out.”

Sonny didn’t just spend his year out reflecting on the future of P.O.D., he formed what has become known as The Whosoevers. That group are made up of Sonny, skater Ryan Ries, Flyleaf vocalist Lacey Sturm, freestyle motocross rider Ronnie Faisst and former Korn guitarist Brian “Head” Welch. Sonny and the group set out to create a movement that challenged formalised Christianity, “I was angry at the American church and I was tired of being labelled as a Christian when it has a million different meanings that really I’m not that proud of.” He says, “I am a believer in Jesus Christ and so I surrounded myself with people that get it and that are part of the real world and not a judgmental church and it just became more of a brotherhood with people like Head, Lacey and a lot of athletes and musicians that would just get together and talk and encourage each other.”

However Sonny does not live split between music and his spirituality, he is successfully able to combine the two and it appears with full metal force in the band latest album ‘Murdered Love’, which was released earlier this year. The title track allows Sonny to fully discuss his ideas of Christianity, “The Bible says that God is love and so it just kind of paints this picture of us butchering and murdering this thing we call love and it was just taking on the moment in the scripture, the moment that Christ surrendered up his life, you know the sky went dark and the ground split open and the religious veil was split in half.”

But not the entire album is dedicated to an apocalyptic concept, there is a bright side. Sonny says, “If you listen back to all our records from the past 20 years, we always have moments like that. Not every song sounds the same like most records today, you know what I mean. We’ve always switched it up.” Indeed, “switching up” appears to come naturally to P.O.D. so Soundsphere asked Sonny what he believes to be the biggest challenge for them. He says, “We’ve been around longer than most of these successful rock bands of our era, and it’s like we still have to work for everything we do.” Even for rock legends, work doesn’t come easy, “For us, it’s like if we don’t tour, we don’t eat.”

Sonny’s strong work ethic is constantly challenged by what he sees as the fame-hungry bands of recent times. “There’s nobody out there doing what we are doing, everybody’s duplicating the old 80s’ Hollywood scene and there is just no balls in [rock] anymore.” Sonny states, “I come from an era where it’s a lifestyle, it’s passion, it’s guys that would rather play underground shows and never go corporate, you know what I mean? It’s a punk rock thing.” Sonny strongly believes in originality and individuality, “Everybody’s trying to be somebody else, no one’s being themselves.”

Do not fret UK fans, Sonny has not forgotten you. He has fond memories of past UK gigs, mainly during 2001 when P.O.D first broke the UK. “We did a bunch of places and that experience was huge. I had a lot more fun and in London we played this little place called The Garage and I thought that was the most fun show,” he continues, “we were bouncing off the walls and so, I’ve always thought the energy there was way more personal than any of the bigger shows.”

To us, Sonny Sandoval is one of rock ‘n’ roll’s great men. He’s very humble, passionate and highly honoured to have lasted twenty years, and he’s got a message for UK fans. “I’m so grateful and I apologise that it’s taken so much time to get over there, but you know we’re not just guys in a rock band and we’re real human beings and we go through real things and experience real struggles with ups and downs, and so we’re just like you guys.” He continues, “We’re definitely gonna get back over there whether its big tour or a small little hole in the wall, it doesn’t matter, we just wanna get over there. We’re grateful to you guys.”

P.O.D continue to tour the US currently, and are planning a UK tour for late 2012/13. ‘Murdered Love’ is available now.