Public Service Broadcasting are an intriguing duo, known to us only as J Willgoose Esq. and his compatriot Wrigglesworth. Together, they take samples of old archive footage and public information films and set them to propulsive, futuristic music. Paul Faller caught up with the pair prior to their show at Fibbers in York for us in a one-on-two interview at BBC Radio York HQ, to talk about the inspiration behind the project, as well as their experiences with ‘trance-goth’ and the possibility of collaborating with a much-loved 90s TV mascot… 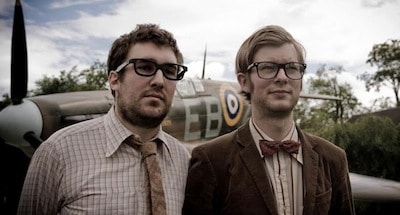 “Teachers have come up to me and said they’ve used our stuff” – J Willgoose Esq.

S] Let’s start by going into a little bit of the history behind the band – were you in any other projects before this, or is this your first musical venture?

J Willgoose Esq.] “I’ve been in a few bands – nothing that’s ever been particularly successful, I have to say! I think Wrigglesworth’s been around the block as well…”

Wrigglesworth] “Yeah, I’ve always just been playing from the age of 8, so I’ve been in many school punk bands…”

S] So you’ve both got a storied musical history!

J] “Oh yeah, Top Guns, it was called – it was me and my brother and a Casio keyboard, it was pretty good stuff…”

S] Well, we’ve all got to start out somewhere.

J] “Well, I might turn back to it for some of the new material, you never know – it’s a goldmine of unused material!” [laughs]

S] Your music uses a lot of samples of old archive material and public information videos – where did that idea come from?

J] “It came from listening to a Radio 4 program, appropriately enough, which was hosted by Mr Tom Robinson, of the parish of 6 Music, and he was presenting an archive hour about the release of some national archive films onto the internet for the first time. I just liked the sound of what I heard, so I thought I’d go and have a listen – not even in a particularly musical sense. I listened to a couple, and I think there was one, ‘Coughs And Sneezes Spread Diseases’, which kind of grabbed me – there were a couple of samples that I thought I might just tinker round with. So I made a song, played it to a few people, and unlike nearly everything I’d ever done prior to that, people said they liked it! So I tried making another one after that.”

S] So you thought you were onto something there.

J] “Certainly relative to what I’d been doing before, yeah!”

S] The name of the band and the general aesthetic, it’s very reminiscent of a sort of ‘stiff-upper-lip’ Englishness – was that intentional, or was it something you built up as you went along?

J] “It’s generally how I look in everyday life, so it seemed to fit particularly well with this project! No, it’s about having your own little world for the band, and I think having that sort of look to it helps. It kind of compliments the material when we play on stage, and it kind of suggests that we have a sense of humour and aren’t taking ourselves too seriously, which is important.”

S] Speaking of the stage show, how does the whole thing work live? I understand there’s a lot of audio-visual elements to it as well?

J] “It’s quite technically complicated – Wrigglesworth here bashes away on the drums, which is relatively simple, hopefully!” [Laughs]

J] “He does a lot of the legwork, keeps me in time. Then we’ve got the films being screened on a 50s TV set and then on a projector at the same time, and then I play a bit of guitar, a bit of banjo. Hopefully there are several things to watch, because there’s a musical performance and it is very much live – it can go quite spectacularly wrong, which I think is the definition of ‘live’ for me! There is that and then there’s a lot of footage – to be honest, most people just end up staring at the footage, which suits me, and I think it suits Wrigglesworth as well!”

S] So you have various different themes for your current recorded material – you have the latest single, ‘Everest’, which is about the first ascent up the mountain, and then we have the whole EP about the Second World War and the various facets of that (‘The War Room’ EP). The tagline you have is “Teaching the lessons of the past through the music of the future,” so where did that whole idea come from, and where did that particular phrase come from?

J] “I have to confess to a slight element of tongue in cheek with that – desperately trying to fill our our first home-made press release, which was probably ignored by everybody! But it stayed on there somehow, and is now being commented on – much to my eternal hubris, but there we go! This whole thing seems to have come out almost as if it was one perfectly formed idea, but it was kind of a series of little steps that have lead to this weird entity that we now are – it was an attempt to unpick what it is that we’re actually doing, and it struck me as an amusing line. At least six or seven teachers have come up to me and said they’ve used our stuff – especially the World War II material – in the classroom to show to their kids to try to engage them in history. It wasn’t actually the intention, but it’s a nice by-product of it – it’s not your usual rock ‘n’ roll band I suppose!”

S] So you have played in York before – you played at DV8Fest over the summer. How was that for you as an experience, compared to your normal live shows.

J] “Well, I discovered a whole new genre that night, which I had no idea existed, and I think I can best describe it as ‘trance-goth’.”

S] Yeah, that sounds about right, I think they’d probably call it EBM or something along those lines.

S] I think ‘trance-goth’ is a fair way of describing it – you look at it and you think…yeah, there’s some goths, but they’re like “cyber-goths” and they’re dancing to trance music.

J] “It was quite an eye-opener for us anyway! But we had a good time and we seemed to go down quite well. There’s some videos of it on Youtube actually, if you want to recreate the unique atmosphere of that experience!”

S] Listening to your songs, I feel like the mood of the music is reflective of what’s going on in the spoken word material – is that how the creative process works, or is it a mix of both, in terms of which comes first, the spoken word or the music?

J] “It’s hard to say. Sometimes there’ll be a musical idea floating around – with ‘Spitfire’, I had the opening riff for a while and wasn’t entirely sure what to do with it, and then mapped out a basic structure for a four or five-song EP about the Second World War, and I thought that could be the one that’s the more optimistic, fighting back sort of note. Then with that, it was much more about finding the material to go with it. But with something like ‘Everest’ I think I’d seen the film before I’d started writing it – I don’t write to picture, or anything, I don’t have the film playing, but I do watch it, listen out for a couple of key samples, then start writing. The samples themselves do on quite late just to give it a bit more structure – it’s not a case of I just drop a load of samples onto some sort of timeline and then write around it, that wouldn’t work for me.”

S] Have you ever had problems clearing the samples you use, or is a lot of the stuff you use public domain?

J] “Most of the early stuff I used was from the Prelinger Archive, which is part of the US National Archive. As far as I understand it’s fully creative commons even for commercial use, which is different to the rest of the National Archive, so that’s helpful – if anybody else is after this kind of stuff, go there and there’s quite a lot of stuff. All the old, I think it’s Sid James [films], like ‘Reefer Madness’, the really sensationalist, absolute nonsense ones – ‘Boys Beware’, the one that’s campaigning against homosexuality, there’s some really quite horrendous stuff in there! But then I phoned up the BFI basically, because I was after the rights to ‘Protect And Survive’, which is the nuclear advisory, “how to survive a nuclear war” [film] – which I think the basic answer to that is you don’t, but they produced a whole load of films just to make people feel a bit better anyway! And they were really receptive to it actually, and they really got behind it and were very accommodating, so I came back to them with this idea of the World War II EP and they were right behind it, they’ve been fantastic.”

S] Is there anyone in particular you’d like to give a special mention to?

J] “Sarah and Peter at the BFI, they’re good eggs!”

S] Have you ever considered using more modern samples?

J] “I haven’t actually put a time limit on it, I haven’t arbitrarily cut it off at, I dunno, when The Antiques Roadshow started! Using stuff from, say, the 90s would be a little bit odd. There’s one sample that I would like to use, maybe we won’t get clearance for it, from the film ‘Good Night And Good Luck’, which is directed by George Cluny. It’s about Ed Murrow and the McCarthy witch hunt in America in the 60s – I don’t think any audio actually exists of the speech he gave at the time, but they re-created the speech for the film, so as far as I know that’s the only audio that exists. I don’t think we’re particularly overly prescriptive in what we would or wouldn’t use.”

S] You’re not pinned down to a particular era?

J] “No, I mean, we might do a tribute to Gordon The Gopher, something like that, it’s possible…maybe a guest appearance actually!”

J] “It would actually, write that down!”

S] Finally, have you got any plans for a full album?

J] “The album’s coming together actually, it should be out in May-ish, and we’re hoping to be touring a lot around that, so if you’ve missed us this time and are kicking yourselves, then hopefully we’ll be back next year.”