We got the chance to brighten up our rainy day at Slam Dunk Leeds by talking to Evan Ambrosio and Tyler Szalkowski of New York pop-punk band, State Champs. In our brief interview we chat with the guys about some of their favourite places in the UK, their influences and plans for the future. 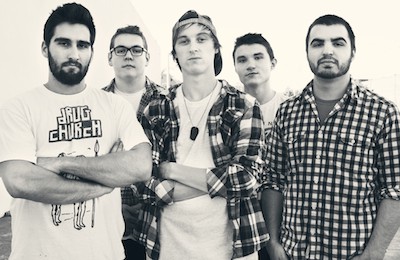 S] Hey guys, how are you doing? How’s the day at Slam Dunk been so far?

T] “We’re doing great! It’s been a little wet, but it’s been awesome.”

S] You’ve been touring since early in the month. How’s your time in the UK been?

T] “We just supported The Wonder Years for two weeks and then we went to mainland Europe for about six days and now we’re back here at Slam Dunk and everything’s been going swimmingly.”

S] What are some of your favorite places to play since you’ve been over here?

T] “Scotland is awesome. Dublin is awesome. London was amazing. We’ve already done two shows in London, we did a show with the Wonder Years at Scala and then we did a headlining show last night at The Old Blue Last and they were both amazing. Those three cities are my top three for sure.”

What are some things that influence you guys outside of music and keep you going?

T] We’re a very family based operation. My mother’s very influential for me. She provides me with a lot of advice, a lot of help. She’s a huge part of what we do.

E] “Yeah pretty much all of our families are.”

T] “Also a motivator for me is all those shi**y kids from high school growing up and saying ‘You’ll never make it. Why do you want to play music? Go to college and become a lawyer’. Those people are my motivators to do this and do it right.”

S] Anywhere you’ve never played yet that you’d like to go?

T] “We haven’t been to Australia or New Zealand yet, but we are going with Neck Deep in the end of August to the beginning of September so that’ll get crossed off soon. I’d like to play a show in Japan.”

E] “I kind of want to check out Hawaii.”

T] “I don’t really like beaches, I get hot really easily.”

T] “We’re gonna fly out in three days and week and a half later we start the Vans Warped Tour. We’ll be doing that all summer. After that we’ll be heading out to Australia and after that well be coming back here in November with New Found Glory, The Story So Far, Candy Hearts and Only Rivals for the Pop Punk’s Not Dead Tour. We’ll be releasing an acoustic EP, I guess you could call it, this summer, so that’ll be out. That’s really it for now.”