To celebrate their upcoming show at Download Festival inside the almighty Castle Donington this year (it’s only eight weeks away), we spoke with bassist Lexxi Foxxx to find out exactly how they prepare for big gigs and what it feels like to put makeup onto your idols. Say what you want about Steel Panther, they carry the legacy of hair metal into this century, making “balls-out” rock serious freakin’ business. 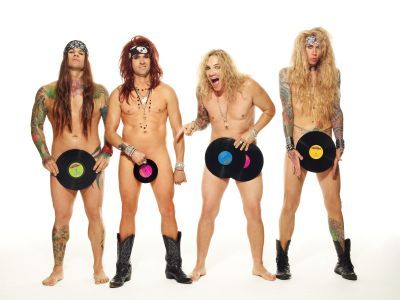 Unusually, Lexxi’s pretty modest when we suggest that people are calling Steel Panther “the last great rock band”, “It’s bitchin’ and it’s great. I don’t know if we’re the last… no, we are. Well, there might be another band that comes along and does bitchin’ heavy metal like us. But right now, it’s cool that people are saying that about us!”

Understandably, the band is psyched to be playing at Download (definitely the most metal festival in England). Lexxi comments: “We’re really looking forward to that, big time; we’re going to be on the main stage this year!” When we ask how this bass-monger is preparing, Lexxi gets excited about his secret weapon: “I’m going for Botox before that gig, so I’ll be excited, but you won’t be able to tell by my face because hopefully it won’t fu**in’ move.”

He’s not in two minds about the virtues of indoor gigs versus festivals, either. “We prefer festivals, they’re much bigger, and it just means we’re playing in front of more people, which is always awesome!”

Download is legendary – we all know that. With a stage that has seen the likes of Kiss, Iron Maiden and AC/DC grace it. Steel Panther aren’t fazed though – not one little bit, having recently toured with Def Leppard and Motley Crue. Lexxi couldn’t be more positive about performing with his heroes and two of the biggest names of rock in the eighties (well… in forever, really) ‘I think Motley Crue and Def Leppard are fu**in’ badass, it was so much fun to tour with them. Tommy Lee was a little bit bummed out though, ’cause Satchel [SP’s guitarist] has messed around with his girlfriend, and he was pissed, we don’t have to get into that right now, but I do have to say, Def Leppard was awesome and it was cool to hang out and fu** bitches with them. Even though they’re a little bit older than we are, they still kept up.”

So, it was the old guard and the new on the same tour; did Steel Panther have anything to teach Crue or Leppard? “Well, they weren’t wearing as much makeup as us. Def Leppard’s guitarist Vivian Campbell hasn’t worn makeup since Whitesnake, so I let him go in my bag and showed him how to bring out his eyes – he has gorgeous eyes and he doesn’t do anything to enhance that, so I just put a little bit of eyeliner and mascara on him. If anything I’m responsible for putting good makeup back on Vivian’s face!” In search of more tips for ourselves, we push Lexxi to talk about his routine. ‘It’s basically the same thing I’ve been doing for years. there’s the day makeup that you wear – you don’t wanna put on too much though, just enough to enhance your cheekbones. Then there’s the stage makeup, where I just put it on a little bit thicker. For the hair, sometimes I’ll put some extra extensions in, but basically I’ve been doing it for such a long time [that I don’t have to think about it]. If I had one tip, it would be: don’t put too much make up on, because you don’t wanna get skin cancer on your face.” Totally.

So, what’s in store for Steel Panther next, then? “We’ll continue to write for the next few months, then put out another record next year. Now though, we are just looking forward to Download!”

To finish up with, we ask Lexxi to explain Steel Panther’s influences in the form of an “unholy Frankenstein’s monster of rock” (because we like to do that sort of thing here). He goes one better than that: ‘We wouldn’t take anything from other bands, what we have instead, is a character called the Supersonic Sex Machine and it has a double-headed penis. Imagine what a Supersonic Sex Machine is and that’s what we’ll have; it’ll be our Eddie. We’ll have that explode from the centre of the stage at Download. We’re not supposed to say anything because it’s supposed to be a big surprise! You’ll see what it looks like! For now though, you’ll have to listen to the song [there is an actual ‘Supersonic Sex Machine tune’] to get an idea of it!” Sounds… lovely.