In this interview, Jenn Nimmo-Smith of Chuffmedia talks to Jack Black and Kyle Gass of Tenacious D for us, about the new record, ‘Rize Of The Fenix’, orgasms, touring Europe and more… get ready to “cream” yourselves. 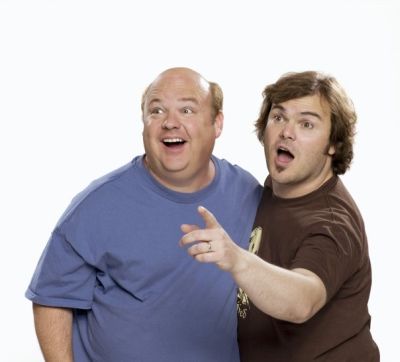 S] You haven’t released any songs since 2006, what brought the group out of its hiatus?

J] “Yeah, I’m gonna go with love of the game. Though it should be a multiple choice, you should give us all of the possible reasons as to why we came out of hiatus and then we choose one!”

S] What has Tenacious D been up to in this time?

J] “This time even more complet-er! We’ve been working very hard to complete a masterpiece, you know. But what else have you been up to?”

J] “I’ve been making babies too, but I just can’t find them.”

J] “I don’t know where they are. Maybe we’ll find them somewhere on the road!”

S] So can you tell use a little bit about the inspiration behind the songs on this album, and a bit about your songwriting process?

J] “Well, my inspiration was really just my children. It’s kind of like when Creed [Scott Stapp] found out about his baby, and he wrote all those songs about it – like ‘With Arms Wide Open’. This is kinda my ‘Arms Wide Open’ album. Would you agree?”

J] “I guess the inspiration was the haters, the non-believers, they inspired us to fight much harder. I mean, it’s definitely our comeback album. We’ve been gone for years. What was the inspiration K, besides fighting off the haters and the critics?

J] “The cover of the album is really a big raging boner. I guess the inspiration was orgasms. We should put orgasms on the special thanks list, I don’t know why we didn’t really.”

K] “Not until we get more, more and better ones.”

J] “Well, if you have more orgasms then they’re not as good, you know that. You’ve gotta spread them out. If you’re gonna want an orgasm every night, it lessens their explosivity. You’ve got to hold off sometimes, just to have a bigger blow-out.”

S] How are you hoping the critics will receive the new album?

K] “I hope they rave about it. I’m gonna read every single review.”

J] “I hope that they speak the truth, my only fear is that they’ll speak what they think they’re supposed to think. They’re gonna say what they’re supposed to say ‘Oh, these guys are just clowns right?’ or ‘We don’t take these guys seriously, right?’. That kind of bullsh**. It’s lazy. I’m open up to critics who will really listen to it and say what they really think, as I honestly think it’s the greatest album in the last seven years. And you say ‘Why seven, Jack, why not just one year?’ Well seven’s just the number that came into my brain.”

S] Have you received any feedback, have you read any reviews yet?

J] “Everyone who’s heard it so far has “creamed”, they’ve creamed upon it. The songs are better than orgasms, it’s been proven scientifically. They’ve wired people brains and when they listen to the album their pleasure cylinders fire on all cylinders. K, can I get your back up on this?”

K] “I’ve read every review so far and they’ve varied about 90% positive. There was a bad one.”

K] “I can’t remember who it was! It said ‘the big comeback falls short’.”

K] “That guy’s either a liar or has the worst taste.”

S] What’s it like making music together again and being back together as a group? Is it the same dynamic or has it changed?

J] “You know, it’s better than ever, really. The older I get the more I appreciate the comradery and the ‘creative buzz’ that we get – it’s been a pleasure. I love to rock. How do you spell that?”

S] So a fair chunk of your tour is going to be spent in Europe in June. What do you like about performing for this specific audience and what are you hoping for these shows?

J] “Well, we’ve never played in Germany before so that will be interesting. We’re looking forward to seeing if the hunger for The ‘D’ is as ravenous as we’ve heard. But the UK has always been some of the best shows we’ve ever had. They just have a deeper appreciated for rock than the rest of the world. And it makes sense, I would say most of the best rock has come from the UK, and it makes sense that they would appreciate it more. Wouldn’t you agree K?”

K] “I do, I think the people in the UK are just a little smarter, a little more sophisticated!”

J] “I don’t know if you’ve heard of these kids, the Arctic Monkeys? I like some Arctic Monkeys, and have you heard of a band called Biffy Clyro? We had to open for them. The Beatles, The Rolling Stones, there’s just some really great bands.”

S] So what are your favorite things to do in Manchester?

J] “I like to go out for some curry and I like to just wander the streets, on a little bicycle built for two. I like to do a lot of tandem biking through parks, and just meet some people.”

K] “Get up close and personal.”

J] “I like to go to a book store and curl up in the corner, read some Sherlock Holmes and talk to some different British people, and the Mancunians. I like to have a spot of tea and a crumpet. Or just stay in the hotel room. I remember that Manchester rocked extra hard though. It’s the Philadelphia of England. That’s a compliment, they’re a very rocking audience.”

S] And you played Glasgow in 2006, what are your memories of the show there?

J] “Well that was one of the best shows ever, remember that K?”

J] “I think that was the biggest show we played in the UK, and it was ‘off the scale’. I remember some ‘ole ole ole’ before the show started, and I remember our opening act were almost killed by being pelted with pennies. Then we went on and the sound of the audience was similar to thunder, Kyle almost had a cardiac arrest because it vibrated his chest cavity so intensely.”

K] “I tell you, that would have been a pretty cool way to go.”

J] “Kind of. ‘He died because his heart was such a pussy!’ He just couldn’t survive the roar of the crowd, and what a roar! And they just kept it coming, we rocked them and they rocked us. And we were rocking back and forth all night long – it was very similar to sex. And we got a tremendous climax. I imagine the people of Glasgow are waiting with baited breath for our return, because no one’s loved them like that since.”

S] I think they will be. You’re playing the same venue as last time too.

J] “Well I hope they’ve reinforced it, because it shall be shaken.”

S] You’re doing three dates in London – can you tell me a bit about what your favourite things are about London, and what you’re looking forward to doing?

J] “In all honesty, the parks are the most beautiful feature of London as a town. You don’t get a lot of towns in the world any more with so much beautiful green parks. I would go down and swing the frisbee a lot. I’ll be meditating, playing frisbee and having a little picnic. I’ll be there everyday.”

S] And you’re also going to be playing Download Festival in June. What can we expect from your set?

J] “Well, I’ve heard that if they don’t like you they throw urine at you. Hopefully we’ll be well liked. But you should expect an umbrella – I’ll bring an umbrella just in case. As much as I appreciate the golden showers, I don’t think it would be safe – there’s possible electrocution.”

K] “I think we’ll be playing fewer songs than we usually do.”

J] “That’s right, for the festival crowd – you’ve got to keep it tight.”

J] “You can expect a spirited… no, muscular set. There should be a sexier word than muscular, but f**k it. It’s gonna be a good set.”

J] “But, you’ll be hearing new songs. We’re gonna kick the teeth right out of the gig with some new songs.”

K] “We’ll massage their libidos in the second half with some old favourites.”

J] “But it’s probably gonna be about 45 minutes of love.”

S] Do you have anything else you would like to add?

K] “Whatever you do, UK, do not download this record. Go to the store and buy it.”

K] “I’m gonna buy up all the vinyl, there won’t be any left. That shit’s a good investment.”

J] “Yeah! If you buy it all imagine how valuable it’s going to be? It just like buying stocks. It’s like the most precious stock you can buy. Okay, I take it back, that’s good sound economic advice – not a lecture at all. You’re looking out for the fans.”

K] “Make sure you put it in a safety deposit box. Don’t take it out of the wrapper.”

J] “Unless you have us sign it. But then they’ll never see that gorgeous poster inside of you and me naked, coming out of the flames? But thanks UK, we’ll see you soon. And one more message for Europe: just stay alive. Because it would be a shame if you died before the D came into town. You don’t want to miss this.”